Forever War Propaganda: Trump and the Death of al-Baghdadi

Forever War Propaganda: Trump and the Death of al-Baghdadi 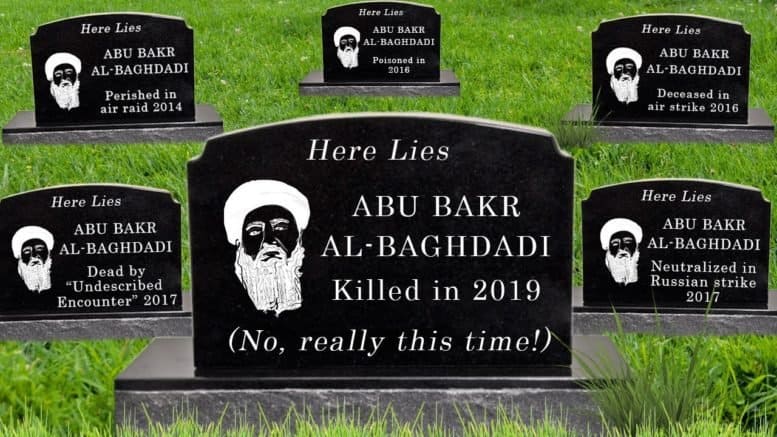 The ongoing theatrical absurdity of twisted forever war propaganda went over the top on Sunday when President Trump announced the death of the elusive leader of the Islamic State, Abu Bakr al-Baghdadi.

Trump announced the death (said to be by way of suicide vest) while reading from a teleprompter, a skill he has yet to master.

US President Donald Trump says the “world is now a much safer place” after the killing of IS leader Abu Bakr al-Baghdadihttps://t.co/yePDgUsGuJ pic.twitter.com/WBB3nUjC4r

There is no evidence al-Baghdadi killed himself when confronted by US Special Forces in Syria, the same as there is no evidence that Obama killed Osama bin Laden (evidence indicates Osama died in Afghanistan of natural causes in late 2001).

Abu “from Baghdad” has died before. In June 2017, Russia said it may have killed him during an airstrike in Syria. The following month, ISIS allegedly admitted al-Baghdadi was killed during an air raid in the Iraqi province of Nineveh.

There is scant evidence Abu Bakr al-Baghdadi existed as described by the US military and the corporate war propaganda media.

“Reclusive even when IS was at the peak of its power, the 47-year-old Iraqi, who suffers from diabetes, was rumored to have been wounded or killed several times,” the AFP reported this past April. “His whereabouts have never been confirmed.” He was known as “The Ghost” (al-Shabah in Arabic), the invisible caliphate leader.

There is little if any reliable factual information on al-Baghdadi. “There are disputes over his career depending on whether the source is ISIS itself, US or Iraqi intelligence,” the Independent reported in 2014.

He was born in Samarra, a largely Sunni city north of Baghdad, in 1971 and is well educated. With black hair and brown eyes, a picture of al-Baghdadi taken when he was a prisoner of the Americans in Bocca (sic) Camp in southern Iraq between 2005 and 2009, makes him look like any Iraqi man in his thirties.

The newspaper reports it “believes” al-Baghdadi “was born in Samarra, a largely Sunni city north of Baghdad, in 1971 and is well educated. With black hair and brown eyes, a picture of al-Baghdadi taken when he was a prisoner of the Americans in Bocca Camp in southern Iraq between 2005 and 2009, makes him look like any Iraqi man in his thirties.”

We are told al-Baghdadi rose to the leadership of Al-Qaeda in Iraq (Tanzim Qaidat al-Jihad fi Bilad al-Rafidayn) after the supposed targeted murder of Abu Musab al-Zarqawi, yet another elusive character who may not, in fact, have existed as described by the government and its media.

The media, however, did report on the “Zarqawi program,” a psychological operation run out of the Pentagon. According to the Post:

The military’s propaganda program largely has been aimed at Iraqis, but seems to have spilled over into the U.S. media. One briefing slide about U.S. “strategic communications” in Iraq, prepared for Army Gen. George W. Casey Jr., the top U.S. commander in Iraq, describes the “home audience” as one of six major targets of the American side of the war.

The Zarqawi myth was engineered specifically for the “home audience.” It was an effort to condition the American people to accept the war on terror abroad and a police and surveillance state at home.

The practice of “successful propaganda” in relation to the Iraq war has gone well beyond the official boundaries contained in military manuals. Propaganda creates an “outside enemy”. Al Qaeda led by Osama and Al Qaeda in Iraq led by Zarqawi. Al Qaeda is behind most news stories regarding the “war on terrorism” including the suicide attacks. What is rarely mentioned is that this outside enemy Al Qaeda is a CIA “intelligence asset”, used in covert operations.

According to the official narrative, Baghdadi, aka Awwad Ibrahim Ali al-Badri al-Samarrai, was captured in Fallujah in 2004 and sent as a “civilian internee” to the Abu Ghraib and Camp Bucca detention centers.

Stone had been brought in to clean things up after Abu Ghraib; at the time, he was a high-ranking marine reservist willing to take a job that many lifetime military folks wouldn’t touch.  Stone was shocked at what he found:  not just a few bad apples torturing a few prisoners, but rather a dysfunctional detention regime, one that seemingly had no purpose and was a proving grounds for young militants.

This is a standard fallback story. It is similar to the “intelligence failures” that supposedly led to 9/11. The “detention regime” at these illegal prison facilities was not “dysfunctional,” but rather part of an operation to crank out terrorists and feed the war on terror, which is designed to last forever.

The official explanation from the Bush administration upon revelations of torture and murder at Abu Ghraib was that the torture was “isolated” and not indicative of US policy. In fact, the opposite was true—Abu Ghraib was part of a wider pattern of torture and brutal treatment at detention centers, including those in Iraq, Afghanistan, and Guantanamo Bay (see Abu Ghraib and the War on Terror—a case against Donald Rumsfeld?).

The “enhanced interrogation” used in Iraq, Afghanistan, and Guantanamo Bay was conceived by the CIA, not for interrogation but, as the CIA’s MKUltra demonstrates, for breaking down and brainwashing individuals. The techniques used were similar to those developed by the CIA and SERE (Survival, Evasion, Resistance, and Escape) developed by DoD and housed at Fairchild AFB, Washington, Fort Bragg, North Carolina, and Fort Rucker, Alabama. SERE was based on supposed Chinese brainwashing techniques.

The truth about Abu Ghraib was revealed during the trial of Bruce Jessen and James Mitchell, two CIA “psychologists” sued by the American Civil Liberties Union on behalf of two former prisoners and the family of one detainee who died of extreme cold in a secret CIA prison.

“Concealed from Congress and the public, the CIA had spent the previous half-century developing and propagating a sophisticated form of psychological torture meant to defy investigation, prosecution, or prohibition—and so far it has proved remarkably successful on all these counts,” writes Alfred McCoy. “Even now, since many of the leading psychologists who worked to advance the CIA’s torture skills have remained silent, we understand surprisingly little about the psychopathology of the program of mental torture that the Bush administration applied so globally.”

The CIA program of “mental torture” was not used to gain information on al-Qaeda and the Islamic State—it is well-known torture does not work and is counterproductive—but rather to breakdown detainees, vacate their personalities, and rebuild them as terrorists and suicide bombers. The “psychopathology of the program” is designed to keep the war on manufactured terror alive and the military-industrial complex fat and happy.

“Enhanced interrogation” is an Orwellian term for trauma-based techniques engineered to brainwash and control individuals. However, as should be expected, the Pentagon has a cover for its behavior. From a US Army publication:

Task Force 134’s current strategy regards detention facility operations as a legitimate part of America’s overall counterinsurgency fight. The detention facility is not just a repository for those plucked from the “real” insurgency, but a legitimate arena for counterinsurgency actions. The task force has shifted detention operations from warehousing insurgents to engaging them. The strategy focuses on touching the human spirit and aligning detainee goals and aspirations with those of a peaceful and prosperous Iraq.

In other words, working to have the Iraqi people accept the brutal invasion of their country, the destruction of civilian infrastructure, targeting of water and agriculture resources, and the murder of a million and a half people.

I don’t believe the US military seriously attempted this, primarily because it is virtually impossible—the Iraqi people know who is responsible for the destruction of their country and the murder of more than a million of their fellow citizens. It is absurd to believe a half-baked “counterinsurgency” program would result in forgiveness of the neocons and George W. Bush. If Iraqis invaded your city or town and began killing your family and neighbors, would you be in a frame of mind to forgive and forget?

No, I believe the real story of Camp Bucca and Abu Ghraib is a secret Pentagon program designed to make certain conflict continues in the Middle East. The ruling elite responsible for the invasion of Iraq is not interest in the “goals and aspirations” of the Iraqi people. It is determined to balkanize and terrorize Arabs, Muslims, and especially the Shias of Iran. An endless cadre of jihadi (Wahhabi) terrorists is required to accomplish this feat and make sure the client states of Israel and Saudi Arabia are the dominant powerbrokers in the Middle East.

Previous Article
In A Society Built On War, We Must Do More Than Just Prefer Peace
Next Article
American Denial: The Russian Interference Delusion and The Ignoring of Israeli Interference