Cui Bono, Israel and the Attack on Saudi Oil

Cui Bono, Israel and the Attack on Saudi Oil 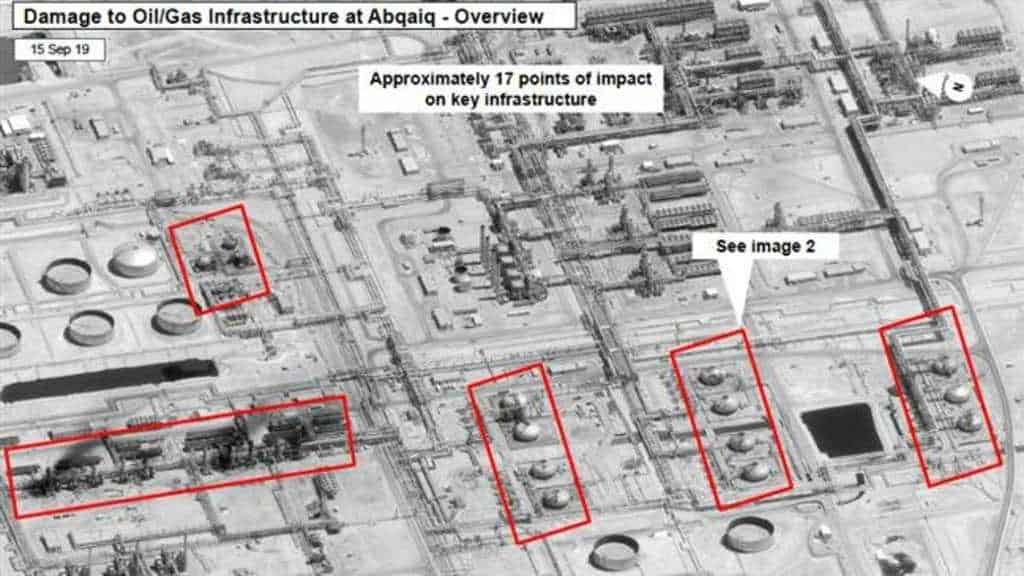 As usual, we’re expected to believe

Tehran is behind nearly 100 attacks on Saudi Arabia while Rouhani and Zarif pretend to engage in diplomacy. Amid all the calls for de-escalation, Iran has now launched an unprecedented attack on the world’s energy supply. There is no evidence the attacks came from Yemen.

It took a couple days to get the narrative ironed out.

Trump is a reluctant to place blame for the attack on Iran. He understands a war with Iran will be catastrophic, not only for the entire Middle East, but the world economy as a whole. It will wreck Trump’s goal of making himself a peacemaker.

Remember when Iran shot down a drone, saying knowingly that it was in their “airspace” when, in fact, it was nowhere close. They stuck strongly to that story knowing that it was a very big lie. Now they say that they had nothing to do with the attack on Saudi Arabia. We’ll see?

Trump is waiting on word from Prince “Bone Saw” Salman before he commits the US military to bombing Iran, likely targeting its oil production infrastructure in tit-for-tat fashion. Iran, of course, will not take this laying down. It will immediately retaliate by hitting oil fields and petrochemical facilities situated in the Persian Gulf Emirates. Iran will also target US military bases, installations, and warships within reach of its missiles.

BREAKING: Iranian Revolutionary Guard commander says “all American bases and their aircraft carriers in a distance of up to 2,000 kilometers around Iran are within the range of our missiles.” – Iranian media

On Tuesday, “senior officials” in the US said without a doubt the attack came from southern Iran which borders the northern end of the Persian Gulf.

The BBC reports Iran has “attacked Saudi oil facilities before, but US officials said on Sunday that they believed the drones and missiles did not originate from the south or south-west, and instead were launched from the north or north-west.”

If we consult a map, we discover Israel is situated to the northwest of Saudi Arabia. Iran is in the east and Iraq to the north. Because cruise missiles and drones have the capability of changing direction, we do not have a good idea where the missiles came from and the party responsible for launching them.

For the US, this is not a problem. It is now habituated to telling lies, releasing misinformation, and disseminating propaganda associated with false flag attacks. Much of what it reports is believed without question by millions of Americans. The state describes this mass credulity and inability to question authority as “patriotism.”

Iran has said it will shut down oil production across the Gulf if US sanctions on its export of oil remain in place. The sanctions imposed on Iran’s oil and economy are an act of war, so it makes sense Iran would be responsible for the attack—that is, if they’re crazy and want their country reduced to rubble and possibly an irradiated no-go zone. It is irrational to believe the leadership of Iran desires such a fate.

Chanting “Death to Israel and America” is rhetorical. Iran does not have the ability to destroy either, although in the event of a war, Israel will certainly suffer an onslaught of missiles from both Iran and Hezbollah in Lebanon. It will need the US to fight on at least two fronts.

It is entirely obvious, even to the casual observer, that Saudi Arabia, Israel, and the war-obsessed neocon faction within the US government are working overtime to destroy Iran.

I don’t believe the fact this attack occurred within days of Trump firing the neocon John Bolton is a coincidence. Bolton failed to steer Trump into bombing Iran and this necessitated a neocon Plan B—yet another, far more serious false flag attack to finally push the US into bombing Iran. Israel and Saudi Arabia would love to do this, but they are incapable and need the US war machine’s help.

Left unmentioned in the slanted and bias deluge of corporate media reports on the attack—all information received from a government known for pathological lying—is the duplicity and violence of both Israel and Saudi Arabia.

Israel has bombed hundreds of targets with impunity in Syria, Lebanon, and Iraq. It has provided medical assistance to jihadi terrorists in Syria.

Saudi Arabia has killed tens of thousands of innocent civilians in Yemen and has spread its poisonous Wahhabi creed of murderous jihadism around the world. It is fair to say the governments of both Israel and Saudi Arabia hate the United States. Israel has carte blanc to spy on America, blackmail US presidents, “lobby” Congress, and steal technological secrets. Recall the “art students” and “dancing Israelis.”

Saudi Arabia is at the center of the 9/11 attacks. Florida Senator Bob Graham, who chaired the United States Senate Select Committee on Intelligence, said in sworn statements that “there was evidence of support from the Saudi government for the terrorists.”

The 28-pages were a “thing” for a short period of time, but have since largely been ignored and buried under a daily avalanche of far less important corporate news.

Israel and Saudi Arabia are now best of buddies. They share the same objectives vis-à-vis Iran. Is it impossible to believe Saudi Arabia would target or allow Israel or the US to target its prized oil fields and refineries?

I believe the answer is yes. Refineries can be rebuilt and oil fields resuscitated. It is a small price to pay to get rid of the mullahs and take down Iran’s critical infrastructure, in effect turning it into another Libya.

But this will not happen. Iran has the ability to defend itself. It’s not Iraq or Libya. Iran’s leaders have promised a long and painful asymmetrical war after their cities are bombed and civilian infrastructure wasted.

This is the actual objective—the “bomb them back to the Stone Age” paradigm—not an illusory nuclear weapons program. It’s how the neocons and Israelis operate—not unlike the Hittites and Assyrians strewing salt in a conquered enemy’s fields. It is the same barbaric mentality—not only murder and drive off your enemy, but make it impossible for him to fully recover.

Prior to his dismissal, John Bolton cited the “Libyan Model” in relation to North Korea. Adam Garfinkle spelled out this process in 2018:

When John Bolton invoked “the Libya Model” a couple of days ago in reference to North Korea, he clearly meant the model, from 2003-04, in which the U.S. government, in the form of the George W. Bush Administration, persuaded the Libyan government to hand over its WMD program stuff in return for a pledge that the United States would not seek to put Muammar Qaddafi’s head on the wall at the Pentagon or in Langley.

Neocons, however, are notoriously duplicitous, and after Obama was elected the pledge to not kill Gaddafi and destroy Libya were betrayed. The lesson: never trust the US or its partners, most notably Britain, when they make promises. Chances are, they’re lying and assassins await in the shadows to do their dirty work.

This is what happened to the Joint Comprehensive Plan of Action—the agreement was nullified by Trump, once again demonstrating the word of the US cannot be trusted.

The destruction of Iraq, Syria, and Libya have nothing to WMDs, chemical weapons, and nuclear weapons programs. In a superficial way, the objective resembles that the Turco-Mongol invasions of the 13th century—kill everybody and let god sort them out.

Chinggis Khan preferred surrender and the creation of vassals offering tribute in exchange for Mongol protection, but this is not the objective of the Israelis and the neocons.

They are not interested in obedience and tribute. They want to decimate their enemies and, after bombing them into submission, balkanize their nations and subject them to never-ending strife, ethnic conflict, and political sectarianism.

Iran, of course, will be identified as the culprit in the targeting of Saudi Arabia’s oil production. It’s unclear what exactly will happen and when, but it can be taken without a doubt this is part of a plan to get momentum moving on war and murder.

It is unfortunate far too many Americans are clueless about what is about to happen and what it will mean—the shut down of oil trade, oil being the lubricant of civilization.

The war to destroy Iran will be worse than the wars in Iraq, Afghanistan, Syria, Libya, and much of Africa. It will sap what’s left our national treasure—borrowed from banksters—and spill a whole lot of blood for the sake of Israel and Saudi Arabia.