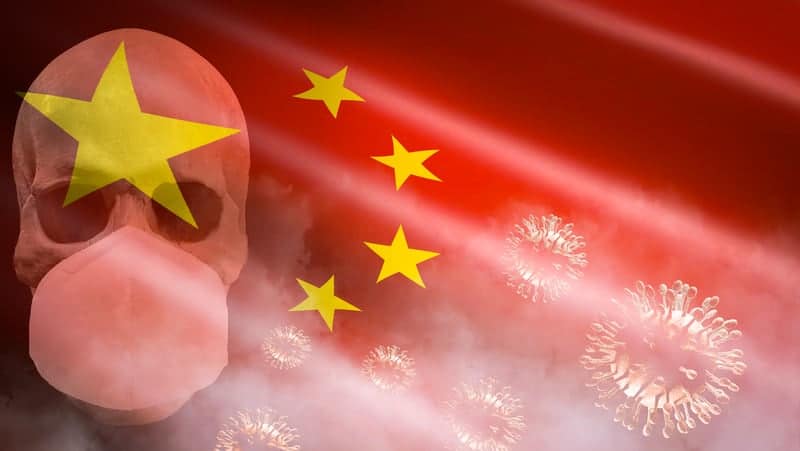 China will catch a cold: there have been advance predictions of a virus outbreak (like the current coronavirus), including a bioweapon targeting China.

“China will catch a cold,”

said an insider who was invited to a high-level Illuminati or NWO (New World Order) meeting in the City of London in June 2005. This insider later become a whistleblower who went public to Project Camelot and was interviewed by Bill Ryan in 2010. His testimony has thus been in the public domain for 10 years. Now, ever since the COVID-19 outbreak in China that began in late December 2019, his testimony takes on a special significance, giving more credence to the idea that this entire coronavirus crisis has been carefully planned and executed – and that it may be a race-based bioweapon or a racially-targeted bioweapon. There are additional predictions of this virus outbreak, including NWO frontman Bill Gates himself, who has been on public record for years stating that there could be a new world pandemic (such as a deadly flu) that could kill 30-33 million people within 6 months.

Bill Ryan called this interview the Anglo-Saxon Mission (transcript here). At one point during the interview, he says that, “the reason why it’s called The Anglo-Saxon Mission is because basically the plan is to wipe out the Chinese so that after the cataclysm and when things are rebuilt, it will be the Anglo-Saxons who are in a position to rebuild and inherit the new Earth, with no one else around. Is that right?” and his interviewee replies that “whether that’s right I really don’t know, but I would agree with you.” When this insider went public, he used the phrase “China will catch a cold” to describe the NWO plan to release a biological weapon or bioweapon specifically designed to target the Chinese. The scheme was to do this after militarily attacking Iran and drawing China (who has an alliance with Iran) into the conflict:

Iran will be attacked, possibly within 18 months. China will come to the aid of Iran, to protect its own interests. Nuclear weapons will be used either by Iran or China, with Israel provoking the first use. Much of the Middle East will be laid to waste. Millions will die within a very short period of time. And for some reason this is here, and I can’t tell you why: China will move forcibly into parts of Russia to extend ceasefire lines. Thereafter, biological weapons will be deployed against China. China will “catch a cold”.

While war with Iran has fortunately not yet transpired, it has been the Zionist-driven agenda for a long time, and we came dangerously close with the Soleimani assassination. Although not everything has exactly happened in the prediction above, there are some very familiar themes; in my opinion, the interview and prediction has a strong ring of credibility and authenticity. Now that the peak of the coronavirus outbreak appears to be over in China, some may say that COVID-19 is not a race-based bioweapon, since it has spread around the world to infect all races. While it’s true that it has spread around the world, there is the distinct possibility that there may be more than 1 strain, including the possibility that more than 1 strain was released in different places.

Meanwhile, NWO frontman and depopulation advocate Bill Gates has been shouting from the top of his lungs for years now that there could be an epidemic or pandemic that would kill millions of people (even before his Event 201 preparedness gig that just happened to simulate a coronavirus outbreak). For instance, this article states that:

“In a December 2018 report, the Business Insider cited Gates as saying that the world is not prepared for pandemics amid an increase in the population and environmental degradation. He claimed that a small non-state actor even had the ability to build a deadlier form of smallpox in a lab environment. Touching upon the fact that people have the ability to travel across the globe in a matter of hours in our day, Gates said that a new outbreak like SARS could kill some 30 million people in six months.”

His Gates Foundation has been modeling such simulations for years now (Bill Gates revealed a scary simulation that shows how a deadly flu could kill more than 30 million people within 6 months). In 2017 Gates even wrote this:

“Whether it occurs by a quirk of nature or at the hand of a terrorist, epidemiologists say a fast-moving airborne pathogen could kill more than 30 million people in less than a year. And they say there is a reasonable probability the world will experience such an outbreak in the next 10-15 years.”

A “quirk of nature” or a coldly-calculated plan for mandatory vaccination and human microchipping via ID2020?

The reason it can be difficult to comprehend events like the coronavirus crisis is that, in the age of the open internet, there is an information explosion and overload. There are so many conflicting reports and perspectives it can be very confusing; there is the motivation to hype and the motivation to downplay that co-exist and affect the bias of every source.

On the one hand, there is good evidence that COVID-19 is being hyped. How do we know it’s different to the normal flu that occurs mostly in winter every year and kills millions? How do we know the cases that are ascribed to COVID-19 are accurate? How can we trust the COVID-19 tests when the PCR test is flawed? How can we trust official figures when we know there are power-hungry leaders willing to seize upon any crisis like this to push forward their agendas? We have the opinion of Dr. Wolfgang Wodarg who in this video shows general statistics and studies on viruses and that 7-14% of people have coronaviruses anyway when they have “the flu.”

On the other hand, there is good evidence that COVID-19 is an engineered bioweapon. As I covered in this article, we have the paper published by Indian scientists (later forced to retract it) who said that the virus was manmade and had HIV inserts. They found that 4 separate HIV genes were randomly embedded within the coronavirus. These genes somehow converged to create receptor sites on the virus that were identical to HIV, which was a surprise due to their random placement. They also specifically stated that this was not likely to happen naturally (“unlikely to be fortuitous in nature”). Then we have the opinion of biological weapons expert Dr. Francis Boyle (who drafted biological weapon legislation signed into law by President George Bush Sr.) who says that COVID-19 is an offensive biological warfare weapon, that the WHO (World Health Organization) is in on it and that it has “gain of function” properties that make it more infectious. However, there is possible evidence against it being a race-based weapon (Chinese government foreknowledge) although that would depend on what extent you trust the CCP (Chinese Communist Party) to not intentionally damage their own citizens.

One possible way to reconcile these different viewpoints is that perhaps it was a deliberately created bioweapon that the creators had hoped would be more virulent, but has so far turned out to be less so. At any rate, we can be sure this crisis will continue to be exploited by the NWO controllers to see just how much they can get away with in terms of squelching human rights and freedom.

What is your opinion? Please feel free to leave your comments below.

Previous Article
Creating and Exploiting the Coronavirus Crisis
Next Article
The New War on Bioterror: Everyone is a Suspected or Asymptomatic Carrier