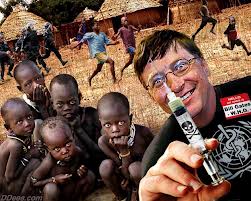 Bill Gates has again slipped up and disclosed the truth in public that vaccines reduce population growth. Vaccines are being used by NWO eugenicists for depopulation. Image credit: David Dees

according to Bill Gates. He comes right out and says it. In the above video clip at the 0:28 mark, you can hear Gates say that “the benefits (of vaccines) are there in terms of reducing sickness, reducing population growth.” He then adds that “it really allows society a chance to take care of itself”, which means of course, to those in the know, that it really allows the sick, poor and weak to be wiped out by the elite New World Order eugenicists – all under the guise of modern medicine and “saving lives”. Society is not taking care of itself. That’s a euphemism, and it’s also a complete inversion of the truth – the truth that vaccines reduce population growth, and therefore that ruthless pyschopaths are killing undesirables. Society taking care of itself would be giving genuine medicine and life support (sanitation, potable water, food) to those in need, not in a way to make them dependent, but in a way to help and teach them to become able to do it themselves.

Bill Gates has been caught in a big lie. He’s using doublespeak, straight out of George Orwell’s 1984, where he holds in his beliefs (and speaks out loud) two contradictory statements, both of which cannot be true. He then tries to suppress one of them which is too inconvenient or uncomfortable. This is Gates’ contradiction: we can cut the number of children who die every year from 9 million to half of that (4.5 million), which means that vaccines saves lives – versus vaccines reduce population growth, which means that vaccines destroy lives.

Vaccines save lives or vaccines destroy lives? It cannot be both. So which is it, Bill?

This is not the only time Bill Gates has publicly announced that vaccines reduce population growth. He also let the cat out of the bag during his speech at TED, where he said that “if we do a really great job on new vaccines … we could lower that (i.e. population growth) perhaps by 10-15%”.

The truth is that vaccines suppress the immune system and introduce dangerous, highly toxic substances into your body, such as mercury (thimerosal), formaldehyde, monosodium glutamate (MSG) and aluminum. They are toxic chemical cocktails which have caused serious adverse reactions, autoimmune diseases like autism and cancer in many people already. Learn the truth about vaccines and how to legally avoid them. Bill Gates also attacks Andrew Wakefield, a man who bravely stood up and went public with his research and findings that showed a connection between vaccines and autism – you can see his story here and consider the evidence for yourself.

Previous Article
Chia and Hemp Seed Omega 3s Fight Flu
Next Article
IRS Harassment Scandal Begs the Question: Is the IRS an Agency of the US Government?