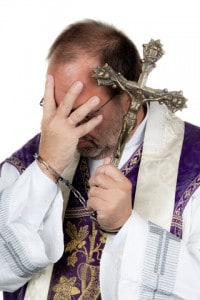 Pedophilia within the Catholic Church is so widespread and systemic because the Vatican insists sexual desire is sinful; yet, that has only led to repression and twisted child abuse. Time to change doctrine?

which evidence shows has occurred all over the world, is finally coming to light enough so that it may be stopped. With molestation occurring worldwide (in the US, Canada, Ireland, Belgium and Australia among others) it is becoming obvious that this is not just the case of a few bad apples. No, this is not a case where it’s unfair to generalize. When you boil it all down, the pedophilia is inherently systemic and directly attributable to the Catholic Church’s misguided doctrine and guilt around sexual desire. That has led to repression, which, in turn, has led to a primal force being denied. Since energy always seeks to express itself in one way or another, if you don’t find a proper outlet for it, it will become gnarly and twisted and leak out where you least expect it.

So why has the Vatican clung on to its old doctrine that sex and sexual desire is somehow bad and sinful? Ultimately, it’s a refusal to take responsibility and a lack of clarity to honestly appraise when something is working and when something isn’t. It would obviously be better if Catholic priests were allowed to marry and had a better outlet for their sexual energy, rather than abusing and molesting choir boys and other children between the ages of 3 and 14. The Vatican could learn a lot from Jesus’ humility (if it actually bothered to strive after or emulate the supposed figure it built itself upon) by saying,” Yes, we made a horrible mistake, we’re deeply sorry and we’re going to change.” However, you won’t hear these words from Ratzinger, who was actually the man in charge of covering up these scandals and silencing the victims before he became Pope.

Sadly, the Catholic Church would rather engage in denial and coverup than address the root cause of molestation. Catholic Church pedophilia is repression, pure and simple. And it’s not holy.

Previous Article
Geoengineering, HAARP and Chemtrails: The Ultimate Weapon of the Globalists
Next Article
The Obama Kill List