US and Germany-Led EU Ain’t About to Allow Grexit

US and Germany-Led EU Ain’t About to Allow Grexit 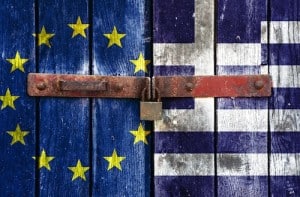 Greece is bolted shut and attached to the EU. The US and Germany-led EU will permit no Grexit or Greek Exit from either the EU or the Euro.

or a Greek exit of the European Union, and probably not even a Grexit of the Euro either. The fact the Greek people voted a decisive “Oxi” or No to further austerity in last Sunday’s referendum is, unfortunately, irrelevant to the real power at the top. The EU was the brainchild of the Bilderberg Group and Nazis who had worked under Hitler such as Prince Bernhard of the Netherlands (a former Nazi SS officer) and Walther Funk. Let us also recall EU founder Jean Monnet, friend of Jesuit and Bilderberger Joseph Retinger, who went on to be called the “Father of Europe”. He described the secret agenda of the EU from the start in a letter to a friend on April 30th, 1952: “Europe’s nations should be guided towards the super-state without their people understanding what is happening. This can be accomplished by successive steps, each disguised as having an economic purpose, but which will eventually and irreversibly lead to federation.”

The EU is About Centralization of Power, not Democracy

In many ways what is transpiring in Greece is highly symbolic. Athens was the birthplace of current Western-style democracy, with the very word democracy coming from two Greek words (demos = people, kratos = rule). How revealing then that an essentially fascist/communistic institution like the EU, with all its unaccountable power, should be blackmailing a small country where democracy began, yet all the while claiming it’s a democratic organization that cares about the people.

The EU is a hierarchical institution whose apex contains unelected bureaucrats. It’s all about bringing all of the European countries under one roof, just as the North American Union, African Union and Asian Unions (first as economic or “free trade” agreements like the TPP) to come will do the same in their respective areas, so that all of them can be merged into a communistic NWO One World Government. The EU isn’t about to let Britain leave, just as Britain itself wasn’t about to let Scotland leave the UK, nor was the Spanish Government about to let Catalonia and Barcelona leave. A Grexit or any other decentralization is anathema to the New World Order agenda. 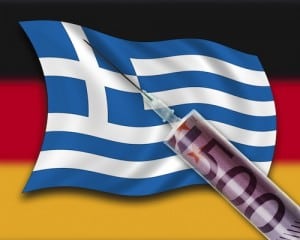 Germany may give Greece a cash injection to keep the debt game charade going a little longer. Debt = slavery = control.

What is being done to Greece by the IMF, the ECB, Goldman Sachs and other international banks is the exactly the same game that former economic hit man and whistleblower John Perkins warned about years ago. Perkins used to be part of it. His job was to go into developing and poorer countries, offer them loans at cheap interest rates to lure them in, and get them on the debt cycle. Part of the deal would be to use that nation’s infrastructure, utilities or natural resources (e.g. water, gas, electricity, oil, coal, gold, silver, minerals, etc.) as collateral. Then, if the recipient nation defaulted on the payments, the loan shark creditor would go in and seize the infrastructure, utilities or natural resource, thus exerting a tremendous amount of control over that country. Remember, credit is really just numbers on a computer screen. All the world’s major currencies are fiat currencies, backed by nothing but faith. The IMF and its cronies were basically converting “credit” (i.e. pieces of paper or digits on a screen backed by nothing) for real, tangible assets like water, oil and gold!

Although Greece is not a third world nation, it was not immune to this criminal debt game. As Global Research write in their article “Greece — The One Biggest Lie You Are Being Told By The Media“:

“Every single mainstream media has the following narrative for the economic crisis in Greece: the government spent too much money and went broke; the generous banks gave them money, but Greece still can’t pay the bills because it mismanaged the money that was given. It sounds quite reasonable, right? Except that it is a big fat lie … not only about Greece, but about other European countries such as Spain, Portugal, Italy and Ireland who are all experiencing various degrees of austerity. It was also the same big, fat lie that was used by banks and corporations to exploit many Latin American, Asian and African countries for many decades.

Greece did not fail on its own. It was made to fail.

In summary, the banks wrecked the Greek government, and then deliberately pushed it into unsustainable debt … while revenue-generating public assets were sold off to oligarchs and international corporations.”

The creditors most definitely include Goldman Sachs as well as German and French international banks.

The simplest reason that a Grexit is highly unlikely to be allowed is NATO and US imperial ambitions. The NWO controllers have been pushing for war with Russia and China through their military arm NATO, and anything that weakens NATO or strengthens Russia is going against their plans. Those of you following the conspirings of Victoria Nuland (US Assistant Secretary of State for European and Eurasian Affairs) may be aware how she is married to arch-neocon Robert Kagan. This is the very same Robert Kagan who founded PNAC (Project for a New American Century) which called for US military supremacy in the 21st century. The PNAC report suggested, essentially, that the task of transforming the world into a US-led global dictatorship would be a slow one, “absent some catastrophic and catalyzing event – like a new Pearl Harbor.” This was conveniently written about just a few years before the 9/11 inside job. Nuland admitted the US had spent $5 billion on regime change in Ukraine (forcibly removing the legitimately elected government of Yanukovich and installing a puppet regime of Neo-Nazis answerable to Washington’s demands). She also got caught saying “Fuck the EU” to US Ambassador to Ukraine Geoff Pyatt in a leaked phone call. Clearly a lovely woman.

Indeed, Greece has a long history of being under CIA and NATO control. Kurt Nimmo of Infowars writes that “The Greek military was under the control of the CIA following Greece’s entrance into NATO in 1952. Elements of the Greek military were part of the CIA’s “stay behind” network under Operation Gladio and these elements (specifically LOK, or Lochoi Oreinōn Katadromōn, i.e. “Mountain Raiding Companies”) were directly involved in the 1967 coup.”

The US-EU Anglo-American New World Order are not about to let Greece get out of their control and form an alliance with Russia, no matter what the Greek people want. Don’t expect a Grexit anytime soon.

Previous Article
Herd Immunity vs. Viral Shedding: Who’s Infecting Whom?
Next Article
Is This the 2nd Biggest Conspiracy of All?