We elect politicians to represent our best interests. Therefore, it is shocking when these elected officials do just the opposite. 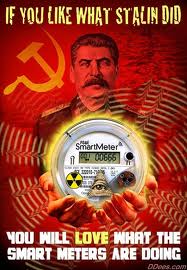 Smart meters are being mandated on every home in North America, but they emit dangerous EMF radiation and grossly invade your privacy.

This is once again the case with smart meters, which are being mandated on every home in North America and in other parts of the world with no proof of safety. Pushed as part of a “green” agenda, these wireless digital meters will replace the analogue meters that have served us well for half a century. They will be used to measure our electricity consumption on a minute-by-minute basis, all day, every day. The idea is that, with this greater awareness, consumers will modify their usage habits to reduce peak load capacity needs, and negate the need to build more generating capacity, which will result in the creation of more pollution. Other meters for water and gas consumption have the same aim.

Critics say that the billions of dollars this rollout requires would be better spent elsewhere. For one, an educational program, like that done for smoking and secondhand smoke, would be more cost effective than installing meters, which in and of themselves don’t reduce consumption one iota.

An important issue is that these meters transmit the data wirelessly, and that they are located–without choice–on everyone’s homes, where they transmit electromagnetic radiation in every direction, including inside your living ­quarters. Unlike other radio frequency (RF) exposures, such as from a cellphone, cordless phone and wi-fi use, this exposure is involuntary. You can hang up a phone, or not use one. You can hardwire wi-fi laptops. Proponents say that the meters only transmit small amounts for minutes a day. The inconvenient part that the utilities’ PR departments leave out is that the reason to use wireless meters is that they can transmit and receive from each other, and that human meter readers will no longer be needed. One or more “collector” meters (which look identical to all the others) will be on a home, maybe yours, in each neighbourhood, collecting and transmitting for perhaps hundreds of homes. And much like a cellphone network, these transmitters/receivers form a mesh network, such that an entire state or province will now have an additional ­layer of radio frequency pollution.

On May 31, 2011, the International Agency for Research on Cancer (IARC), which is the cancer research arm of the World Health Organization (WHO), classified RF radiation as a 2B carcinogen, or a possible human carcinogen (other 2B carcinogens include engine exhaust, welding fumes, chloroform and DDT). This means that with the published, peer-reviewed science now available, it is plausible that electromagnetic frequencies between 30 KHz and 300 GHz can cause cancer. Although the IARC finding pertains to cellphones, it suggests that other types of RF could carry the same type of dangers. There is no safe level of exposure. Industry apologists claim truthfully that the emissions are within North American guidelines, omitting the fact that these guidelines are the second worst in the world. Only the UK is worse. On top of that, the regulations are based on heating of tissue, while ignoring the wealth of data showing negative impacts of the pulsed RF signals on the cell membranes of all living things. Our politicians, without public consultation or scrutiny from any utility commissions, have mandated that equipment that IARC concluded may cause cancer must be affixed to everyone’s home. Not only can this mesh network adversely affect people (children, pregnant women and the elderly being the most vulnerable) but also all flora and fauna everywhere.

Because of consumer backlash, utilities are being forced to contemplate opt-out provisions. What isn’t stated is that opting out is not protective when the rest of the neighbourhood is still transmitting 24/7. Walls won’t protect you, as magnetic fields can pass through 10 feet of concrete, still at the speed of light. In addition, the meters themselves use a switching power supply which creates electronic noise which then is carried on the wiring of the electricity grid, including the wiring in your home. Published studies have shown that this dirty electricity also has deleterious health ­effects.

A question of rates

Criticism doesn’t stop at health concerns. Despite assurances from industry, critics are of the opinion that increased energy rates will take effect for peak hour usage. This economic bludgeon will coerce customers to do their laundry at 3:00 a.m. but pay more for non-optional usage, like cooking their breakfast and dinner. Customers already report vastly increased bills once the meters are activated, with no increased usage.

Big Brother is alive and well here in other areas. As the meters transmit wirelessly, they can be hacked, and already have been. Despite industry’s denial, and despite some level of encryption, your personal usage information can be hacked. If hackers can hack into the Pentagon and other entities with electronic expertise, like Apple and Sony, these industry assurances are just more hot air.

Aside from being hacked, the utilities claim a right to all of this data, which is eminently marketable. Your home is no longer your castle, a bastion of personal privacy. Protection of your privacy is so important that government privacy commissioners are alarmed and are just starting to ask questions. The meters are a Trojan horse that we unwittingly allow into our private space. Someone, somewhere, can know when you use electricity whether for cooking, shaving, reading or, for example, a vibrator. All equipment has a unique electronic signature. Customers are encouraged to purchase in-home monitoring equipment ($450-600) to give them immediate feedback. This is called the home gateway, an additional wireless communication device between the utility and your electrical appliances. This gives the utility effective control over every appliance in your home, without your knowledge or consent. During peak times, the utility can turn down your thermostat, water heater, air conditioner or any other appliance.

Mercury is the second worst neurotoxin on the planet. Consumers have voiced strong opposition to the phasing out of traditional incandescent bulbs in favour of compact fluorescent lighting (CFLs). Aside from the claims that CFLs make people near them ill and also produce dirty electricity, they contain mercury and must be handled as hazardous waste when broken or disposed of. Earlier this year, Sen. Mike Enzi (R-Wyo) introduced legislation to repeal the act mandating CFLs, in part because the mercury in one CFL bulb is enough to contaminate 6,000 gallons of water beyond safe drinking levels set by the US Environmental Protection Agency. Smart meters, according to hazard disposal instructions on the website of the manufacturer Itron, contain a mercury tilt switch. Each switch contains approximately 800 milligrams of mercury, equivalent to that in about 500 CFLs. For this reason, the switches have been banned in American built cars since 2003. Effective in 2012, the Canadian government has banned the importation of any products that contain this much mercury.  So now we know why the industry is in such a hurry to import the switches this year.

With upwards of two million meters to be installed in homes and businesses in BC, this equates to more than one-and-a-half metric tonnes of mercury. According to Sen. Enzi’s researchers, this would contaminate six trillion gallons of drinking water. For an idea of scale, the Great Salt Lake in Utah, the largest salt water lake in the Western Hemisphere, contains almost five trillion gallons, according to Answers.com. From Environment Canada’s website, the average Canadian uses 343 litres daily (382 in the US) and 10 percent of that is for kitchen and drinking. As there are 3.785 litres in one US gallon, a Canadian uses about 90 gallons a day, nine gallons for kitchen and drinking, which equates to 3,285 gallons per year. So, just in BC alone, the electrical utility will be faced with disposing of enough mercury to contaminate the annual kitchen and drinking water consumption that 33 million Canadians (the total population) would use over 55 years. This doesn’t include similar disposal problems for water and gas smart meters. It also doesn’t include air pollution caused by accidents or fire (apartment buildings can have dozens of meters clustered together in a bank). And reports are everywhere on the internet about these meters catching fire. Do our first responders now have to wear hazmat suits when attending every house and business fire?

As bad as this news is, there is a solution. First, stop installing wireless smart meters. Then hardwire them, as is done in some jurisdictions. Looking at the bigger picture, fibre optic cabling to the home and business would not only connect the smart meters, but could also ­offer benefits of vastly increased internet speeds, ­privacy, distance education and medical diagnostics, and from a health perspective, it doesn’t give off RF radiation. The backbone of the existing cellular network’s fibre optic cabling is already in place and available. North America was the birthplace of the internet and therefore had the technology lead in the world. According to the United Nations, Canada now ranks 19th and the US ranks 17th out of 154 countries in the use of information and communications technology, behind mostly Asian and European countries. This would be an opportunity to help North America regain its technological edge and provide security for our grid.

Consumers are being led to believe that smart meters are for their benefit and that of the planet. But, really, when it comes to giving up our privacy and control of our homes, “smart” meters are dumb…like a fox. Or a Trojan horse.

Milt Bowling is president of the Clean ­Energy Foundation and chair of the HANS Electromagnetic Task Force.

Previous Article
Smart Meters, Dirty Electricity and Disease
Next Article
The Dark Side of Smart Meters