Propaganda Narratives Are Custom-Made For Each Ideological Echo Chamber

Propaganda Narratives Are Custom-Made For Each Ideological Echo Chamber 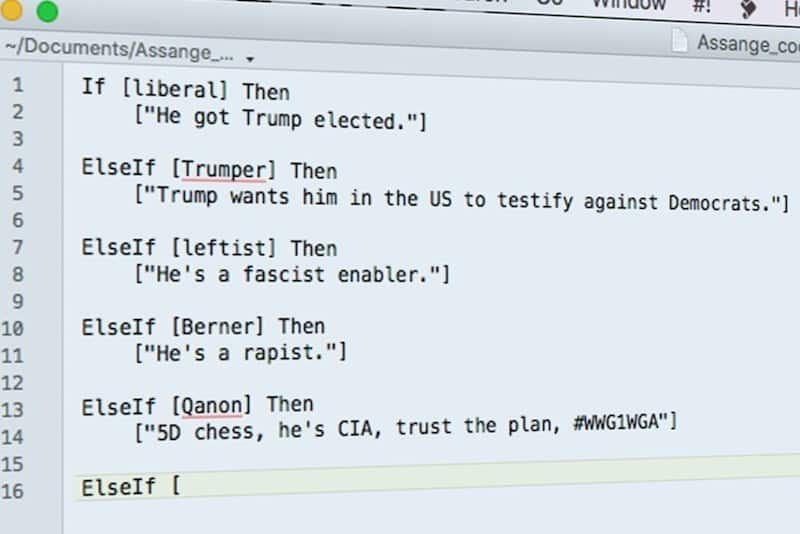 Yesterday I started a thread on Twitter lamenting the fact that support for WikiLeaks and Julian Assange has been eroded all across the political spectrum since 2016 by the establishment smear campaign.

I started the thread because I’d just been reflecting on how some of the first clumsy articles I ever wrote for this gig were basically just me marvelling at how support for Assange had united Berners, Trumpers, Greens, anarchists, libertarians and hackers against those who sought to silence him. Yet today I routinely see people from those factions smearing him because, at some point between then and now, an establishment propaganda narrative got through to them.

Sometimes all I can do is stare in awe at the power and efficiency of the imperial propaganda machine. When I first started this gig in 2016 Assange had way more support, from Berners, Greens, Trumpers, all across the spectrum. Now a large amount of that support has been eroded.

Almost immediately after I made the initial post, commenters started lining up to unintentionally prove me right. A Bernie supporter came in to proclaim that Assange is “a giant piece of shit”, and a liberal claimed Assange was “a de facto member of an election campaign to get a white nationalist elected president of the U.S.”

Multiple Trump supporters came forward arguing in support of their president’s persecution of Assange, arguing that his imprisonment and pending extradition is no big deal, claiming Assange is a CIA asset, saying Assange needs to be punished for publishing US military secrets, arguing that Trump is actually just trying to force Assange to give up his sources for the 2016 publications (as though a president coercing a journalist to give up a source with the threat of life in prison would be perfectly fine and constitutional), and claiming Assange’s persecution is coming exclusively from the UK and not the US (the US extradition request is the only reason for his continued imprisonment and US officials are openly giving instructions to British prosecutors in the courtroom).

These are all groups who once supported Assange, and now they’ve all got members who are cheerleading for the Trump administration’s agenda to extradite him and lock him away for life. They’re all cheering for the same agenda, but they’re doing it for different reasons.

Or so they think.

What’s your reason for NOT supporting Julian Assange? Do you have one?

If so, then read this exhaustively researched response to every complaint anyone has had against Assange. They’ve all been debunked.https://t.co/W9g6R6On0R

In reality, they’re all cheering for the exact same agenda for the exact same reason: powerful people want to make an example of a journalist who exposed US war crimes, and they’ve been advancing a concerted smear campaign across all political sectors to manufacture support for that agenda. Just as with war, they manufactured support for a preexisting agenda and then went in for the kill. The only reason a Trump supporter and a Democrat believe they want Assange prosecuted for different reasons is because they’ve each been fed different narratives corresponding to the values of their respective ideological echo chambers.

Because of the QAnon psyop and other related narrative management operations, Trump supporters believe that everything this president does is a brilliant strategic maneuver against the Deep State, even when it transparently facilitates longstanding establishment agendas. Because of the Russiagate psyop and its related mass media smear campaign, liberals who once celebrated Assange for his publications on Bush administration war crimes now celebrate a Trump administration agenda to imprison a journalist for publishing inconvenient truths. Leftists targeted with other smears believe he’s a fascist and a rapist. Paranoid types believe he’s a CIA asset and “controlled opposition“, even as he’s being tortured to death by the empire he supposedly serves.

Every political sector has been given a custom-made reason to hate Assange by the narrative management network whose sole interest is imprisoning a journalist for telling the truth. And it’s been done so brilliantly that people never even stop and question who these new beliefs they’ve suddenly espoused are really serving. The science of propaganda is truly awe-inspiring sometimes.

US Needs To Occupy Syria Because Of Kurds Or Iran Or Chemical Weapons Or Oil Or Whateverhttps://t.co/AZH4NZejve

But take away the narrative soundtrack and what do you have? US troops staying in Syria. That tells you what this is actually about.

Simply mentally muting the narrative soundtrack that babbles about all the endless justifications for the US-centralized empire’s behaviors, and instead looking at the actual behaviors themselves, is a great way to see the empire’s true motives for yourself. Ignore all the stories about why things need to be as they are and you just see things as they are: weapons of war being deployed all around the globe, resources leaving the hands of the many and going into the hands of the few, more and more surveillance laws and mechanisms being put into place, more and more dissident voices losing their online platforms, more and more dissident journalists being locked in cages.

That’s the real goal. That’s all it’s really ever about. Despite all the different reasons people offer for their support of pernicious longstanding establishment agendas, the real reason is that they’ve been propagandized into doing so because it benefits the powerful.

It’s the propaganda, plain and simple. There’s been a concerted narrative management campaign spanning all western nations and every political sector to kill public support for Assange. It’s just like a war: manufacture consent, then go in for the kill.https://t.co/rUa1eJqg0w

You might think it’s more difficult for the propagandists to come up with different narratives for each ideological echo chamber, but it’s actually easier, because people will actively gaslight themselves into believing a propaganda narrative if it helps protect them from cognitive dissonance. If you closely identify with the Democratic Party, then you’ll do the propagandists’ work for them and actually talk yourself into believing the persecution of Assange is good if it helps you to defend that identity structure and protects you from the cognitive dissonance caused by the 2016 WikiLeaks publications. If you closely identify with support for Trump, then you’ve got every cognitive incentive to try and insulate yourself from the psychological discomfort you’d experience by consciously acknowledging that this administration is doing something deeply disgusting to Assange, and you’ll quickly snap up any excuse you’ve been given to do so. Brighter sparks will even come up with their own variations and add them in to the mix.

The whole propaganda matrix works this way: people are actively herded into conflicting ideological echo chambers, and the “us versus them” mentality which that conflict engenders creates strong identification with and loyalty to that tribe. From there it’s just a matter of giving people narratives which allow them to self-gaslight in a way that protects those identification structures.

But if you simply ignore the narratives and watch where all the troops, resources and prisoners are actually going, you’ll see what’s really going on. World minus narrative is night-and-day different from world plus narrative. We must find a way to overcome their deceptions.