Only Cowards And Sadists Support The Persecution Of Assange

Only Cowards And Sadists Support The Persecution Of Assange 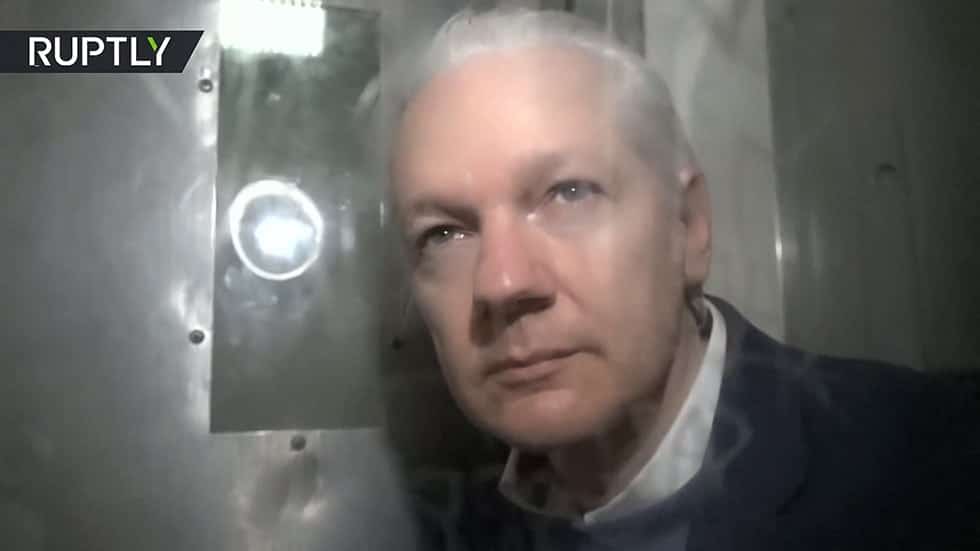 The torture and persecution of Assange is horrific, as evidenced by his physical and mental deterioration. The US is controlling the UK justice system. This picture was taken just recently with Assange being transported to the courtroom. Image Credit: RT

The Persecution of Assange continues at full speed,

with the courageous whistleblower being tortured to the point where he is losing his mental faculties. They have been throwing Assange to the dogs for years now. Former British ambassador Craig Murray has published a very disturbing account of Julian Assange’s court appearance yesterday which I recommend reading in full. There have been many reports published about Assange’s case management hearing, but the combination of Murray’s prior experience with torture victims, his familiarity with British courts, his friendship with Assange, and his lack of reverence for western power structures allowed for a much more penetrating insight into what happened than anyone else has been able to provide so far.

Here is a small excerpt:

“Before I get on to the blatant lack of fair process, the first thing I must note was Julian’s condition. I was badly shocked by just how much weight my friend has lost, by the speed his hair has receded and by the appearance of premature and vastly accelerated ageing. He has a pronounced limp I have never seen before. Since his arrest he has lost over 15 kg in weight.

But his physical appearance was not as shocking as his mental deterioration. When asked to give his name and date of birth, he struggled visibly over several seconds to recall both. I will come to the important content of his statement at the end of proceedings in due course, but his difficulty in making it was very evident; it was a real struggle for him to articulate the words and focus his train of thought.

Until yesterday I had always been quietly sceptical of those who claimed that Julian’s treatment amounted to torture – even of Nils Melzer, the UN Special Rapporteur on Torture – and sceptical of those who suggested he may be subject to debilitating drug treatments. But having attended the trials in Uzbekistan of several victims of extreme torture, and having worked with survivors from Sierra Leone and elsewhere, I can tell you that yesterday changed my mind entirely and Julian exhibited exactly the symptoms of a torture victim brought blinking into the light, particularly in terms of disorientation, confusion, and the real struggle to assert free will through the fog of learned helplessness.”

“This may be the most important article you will ever read. I’m not exaggerating. I beg you now to read it. #JulianAssange in Court – Craig Murray https://t.co/D42gqKDsMz”

Murray reports that there were no fewer than five representatives of the US government in the Westminster Magistrates Court that day, and that there were seated behind the British prosecutors and essentially giving them orders. The judge, Vanessa Baraitser, reportedly behaved coldly and snarkily towards the defense, smirking and refusing their requests without explanation, while behaving warmly and receptively toward the prosecution. Assange’s extradition hearing will commence without delay on February of next year, despite the case violating the 2003 US/UK extradition treaty, and despite new evidence emerging of CIA-tied espionage on Assange and his lawyers while he was at the Ecuadorian embassy. It will commence in a tiny Belmarsh courtroom with almost no room for the public to provide scrutiny, without Assange’s defense having adequate time to prepare.

Assange’s lawyer Mark Summers told the court that the case was “a political attempt” by the United States “to signal to journalists the consequences of publishing information.” And of course he’s right. Nobody sincerely believes that the 175-year sentence that Assange is looking at if he’s successfully extradited to the US by the Trump administration is a reasonable punishment for publishing activities which the Obama administration had previously declined to prosecute based on the exact same evidence, citing concern for the damage the precedent would do to press freedoms. These charges have nothing to do with justice, and they aren’t meant to be merely punitive. They’re made to serve as a deterrent. A deterrent to journalists anywhere in the world who might otherwise see fit to publish inconvenient facts about the US government.

This is obvious. It is obvious that the US government is destroying Assange to signal to journalists the consequences of publishing information. It is therefore also obvious that any journalist who fails to use whatever platform they have to speak out against Assange’s persecution has no intention of ever publishing anything that the US government doesn’t want published. Their silence on or support for what is being done to this man can and should be taken as an admission that they are nothing other than state propagandists. State propagandists, sycophants, and cowards.

“Today in court, Julian Assange struggled to say his own name and date of birth as he appeared in the dock. He claimed to have not understood what happened in the case management hearing, and was holding back tears as he said: “I can’t think properly”.”

Cowardice is driving public support for Assange’s persecution. Cowardice and sadism. Even if every single bogus smear against him were true, from the lies about feces on embassy walls to the still evidence-free allegation of Trump/Russia collusion, even if every single one of those ridiculous fantasies were true, his punishment to date would be more than enough. I mean, exactly how much torture is appropriate because your preferred candidate wasn’t the one who was elected? How weird is it that such entitled sadism goes unquestioned? To continue to call for more is to reveal your sick fetish, whether you’re one of the powerful people he pissed off or just another mindless repeater in the comments section. Enough. You’ve had your pound of flesh.

The Persecution of Assange – Happening in Slow Motion

We are watching a great tragedy unfold in a fractal-like way, from the zoomed-out meta tragedy of the worldwide death blow to press freedom, drilled down to the personal tragedy of this death blow to a man called Julian Assange. His once encyclopaedic brain can now barely remember his own birthday. This guts me. There are no other minds on earth that understood the power dynamics of invisible imperialism and the Orwellian dangers humanity now faces as we hurtle towards and AI-dominated information landscape as well as his did. That mind has been purposely destroyed. We must never forget that. We must never forgive that.

It’s been a tough day. My heart has been hurting and my sighs have been long. The only brightness I can see through the bleakness is the quandary that appears to be emerging for these nationless plutocrats who are pulling the strings. The more they get their way, the more obvious their actions must necessarily be, because the thing they are attempting to do is so totally abnormal. Yesterday’s court proceedings were blatantly farcical, from the curious rulings, to the strange sight of US advisers interfering in a UK case about an Australian citizen, down to even the dismissive smirk on the judge’s face. None of this is normal, and when things aren’t normal there is a risk that people will notice, and things are only going to get stranger as they attempt to pull this off.

[Remember all the good that Wikileaks has done – to give 2 small examples, exposing the Clinton-Podesta pedophile emails and exposing CIA Vault 7 surveillance).