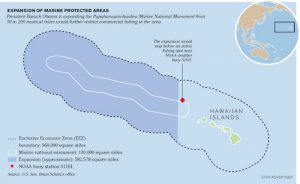 Another Obama land grab has occurred. A marine area twice the size of Texas is now under Fed control. Commercial fishery is banned, but the Military isn’t.

just occurred on August 26, 2016, when the US Federal Government announced that it had massively expanded the scope of its marine protected area near Hawaii known as the Papahanaumokuakea Marine National Monument. With this presidential proclamation, Obama has well and truly earned first place among all US presidents in history for appropriating, borrowing or stealing (depending upon how you look at it) the most amount of land, including aqueous territory. With this top-down order, over half a million (582,578) square miles off the coast of Hawaii will be seized as federal government property. This is an area twice the size of Texas and over 4 times larger than the current size of this marine monument which was created by George H. W. Bush (George Bush Jr.). However, as with all government moves, it’s wise to look at this Obama land grab from all perspectives. Obama pulled this off with a stroke of a pen, without any public process or input. Is it really about saving the marine wildlife and ecosystem? If so, then why does the US military still have free rein over the area – a military which uses sonar and other weapons which do more damage to an area than commercial fishing?

Monument Expansion Has Restrictions on Science, Oil Drilling and Commercial Fishing – but None on Military

On the one hand, this proclamation may give hope to environmentalists who are tired of seeing the destruction of so many habitats around the world. The proclamation places outright bans on drilling for oil and gas, harvesting of undersea minerals, and commercial fishing. It allows under regulation some scientific research, Native Hawaiian practices and non-commercial fishing. On the other hand, however, none of this applies to the US military – which arguably does more damage to an area than other groups when using destructive weaponry. For an Empire as military-obsessed as the United States, this should come as no surprise. An excerpt from the proclamation states:

“The prohibitions required by this proclamation shall not apply to activities and exercises of the U.S. Armed Forces, including those carried out by the United States Coast Guard.”

“Nothing in this proclamation or any regulation implementing it shall limit or otherwise affect the U.S. Armed Forces discretion to use, maintain, improve, manage, or control any property under the administrative control of a Military Department or otherwise limit the availability of such property for military mission purposes, including, but not limited to, defensive areas and airspace reservations.”

So how much of this decision is motivated by genuine care for the environment, and how much by a desire to create another military zone where no one else can enter? Local Kauai resident and activist Lyn McNutt wrote the following about how this Obama land grab suits the Pacific Missile Firing Range (PMRF, the military base on Kauai) just fine:

“The military is not subject to any of the conservation rules, and by allowing them to operate sonar in the area and continue missile launches and at sea training, the conservation rules are meaningless. Recently, the Pacific Missile Firing Range has been expanding its territorial restrictions on fishers due to rocket firing and missile testing. If the boundary of the new NWHI [Northwestern Hawaiian Islands] area was expanded from Nihoa to 200 miles, then Niihau and part of Kauai would be off limits to fishers, and the line would conveniently come right up to the restricted area around PMRF.”

“Since there is talk of making PMRF an active military base, and since recent activity took place in an expanded range restriction (during a prime fishing week), fishers are very concerned that expanded military use will result in further restrictions.”

The US Military (Navy) has admitted that their sonar testing and weapons could kill around 170,000 whales and dolphins.

For many years now, the US has been testing and firing sonar weapons to the great detriment of marine wildlife (namely cetacean creatures such as whales and dolphins) which use their inbuilt sonar for navigation, communication, echolocation and more. In many instances these poor creatures have died as a result of US Navy sonar interference. Imagine having sounds as loud as the blast of a rocket disorient you, burst your ear drums, paralyze you and kill you, you’ll get an idea of what’s going on. The Scientific American reports:

“Sonar systems—first developed by the U.S. Navy to detect enemy submarines—generate slow-rolling sound waves topping out at around 235 decibels; the world’s loudest rock bands top out at only 130. These sound waves can travel for hundreds of miles under water, and can retain an intensity of 140 decibels as far as 300 miles from their source … In 2003, NRDC [Natural Resources Defense Council] spearheaded a successful lawsuit against the Navy to restrict the use of low-frequency sonar off the coast of California … In filing their brief, the groups cited Navy documents which estimated that such testing would kill some 170,000 marine mammals and cause permanent injury to more than 500 whales, not to mention temporary deafness for at least 8,000 others. Coalition lawyers argued that the Navy’s testing was in violation of the National Environmental Policy Act, the Marine Mammal Protection Act and the Endangered Species Act.

Two lower courts upheld NRDC’s claims, but the Supreme Court ruled that the Navy should be allowed to continue …”

So the US Navy admits with their own documents that sonar testing would kill 170,000, but so what, right? They’re only animals, right? Who cares about sentient and intelligent animals when it comes to the hallowed concept of national security? That’s the kind of callous, dehumanized, depersonalized attitude you have to adopt to “make it” in the military and advance through the ranks. Orca researcher Ken Balcomb has called the sonar testing an acoustic holocaust.

As mentioned above, this is hardly the first Obama land grab. Remember back in 2014 when tension erupted over the Obama land grab in Nevada on the Bundy Ranch? Things got so intense there was a standoff between armed militia (on the side of the Bundys) and federal agents of the BLM (Bureau of Land Management). Thanks to the great research of Kit Daniels of InfoWars, it came out that the land grab was not motivated by the Feds’ desire to save the endangered desert tortoise, but rather was promoted by Senator Harry Reid’s desire for personal profit. His son Rory Reid was the chief representative for a Chinese energy firm planning to build a $5-billion solar plant on public land in Laughlin, Nevada. At the time, Neil Kornze, former senior adviser to Harry Reid, was the director of the BLM.

These kind of shenanigans, duplicity and conflicts of interest are all too common in the US Government (and other governments around the world). For all its pure intentions, the environmental or green movement has been hijacked and subverted. All sorts of shady activities and agendas are carried out under the green rubric. It’s crucial to question things with a critical eye and never just simply believe an action is being carried out for the environment alone. TruthFeed declared:

“It’s a weird, sad day in America when the president praises himself for seizing hundreds of thousands of acres with just one, simple unilateral action.

It’s time for Congress to put checks on the presidential powers granted by the outdated Antiquities Act, so we can prevent future presidents from seizing more American land for a purely political reason that is open to debate — whether the White House likes it or not.”

Conclusion: Is this Monument Expansion Connected to the US Pivot to Asia and Encircling of China?

Many questions remain. Is this recent Obama land grab or monument expansion an isolated incident of environment care, or is something deeper going on here? Is this really about “saving the environment” or “saving endangered species”, or are they just excuses for a deeper geopolitical agenda of isolating, surrounding and encircling China? Is this part of the US pivot to Asia? Will this provide more cover for the US military to carry out its activities in secret, away from prying eyes? Feel free to post your comments below.