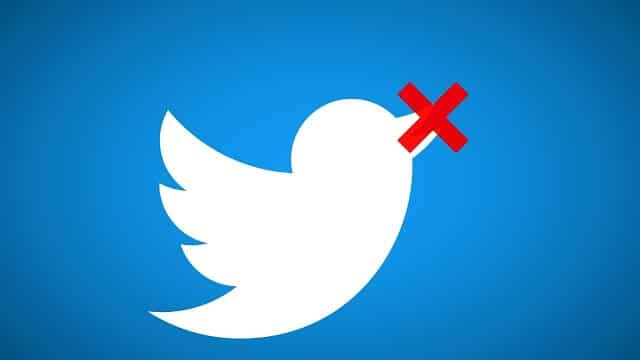 Big Tech company Twitter sided with the US Government & its NGO manipulators (Soros-funded NED) by censoring pro-Beijing Chinese viewpoints on its platform.

When Twitter Safety announced that it was taking actions against “information operations” directed at Hong Kong – informed observers could have immediately assumed that Twitter was not actually serious about stopping anything of the sort – but rather ensuring the information operation they are a part of was protected and those attempting to take action against it were purged from their platform. And of course, those informed observers would be correct.

We are disclosing a significant state-backed information operation focused on the situation in Hong Kong, specifically the protest movement and their calls for political change.

The statement would also claim:

This disclosure consists of 936 accounts originating from within the People’s Republic of China (PRC). Overall, these accounts were deliberately and specifically attempting to sow political discord in Hong Kong, including undermining the legitimacy and political positions of the protest movement on the ground. Based on our intensive investigations, we have reliable evidence to support that this is a coordinated state-backed operation. Specifically, we identified large clusters of accounts behaving in a coordinated manner to amplify messages related to the Hong Kong protests.

Ironically, “a coordinated state-backed operation” is exactly what the Hong Kong protests themselves are. Extensively documented evidence – much of which was being exposed and shared by accounts purged by Twitter including this author’s own Twitter accounts – has proven beyond doubt that the Hong Kong protesters are funded and directed by the United States government with virtually every protest leader having literally travelled to Washington D.C. to conspire with US politicians and organizations like the National Endowment for Democracy (NED) – an entity openly admitted to be used for destabilizing and overthrowing political orders in foreign nations.

Despite this overt foreign-backed effort to destabilize Hong Kong and wider China – Twitter has instead decided to target accounts within China itself to disrupt any effort to expose and confront this US-backed unrest unfolding in Hong Kong.

More recently, US-backed agitators have turned from violence including attacking police and arson – to attacking Hong Kong’s civilian infrastructure including its mass transit system. Protesters have been seen intentionally trying to derail trains – and in fact – one train did derail injuring several passengers. 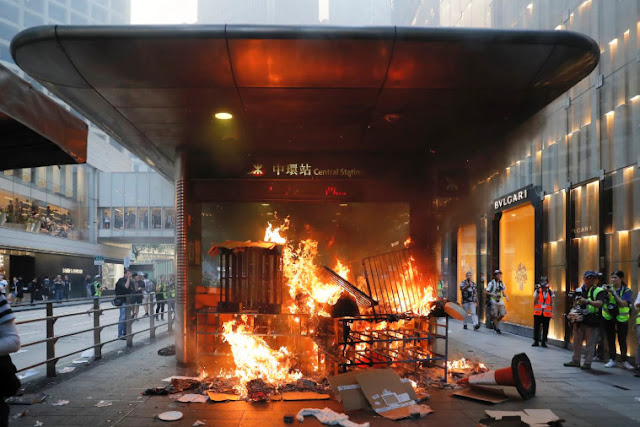 The Washington Post in its article, “Under Hong Kong’s streets, the subway becomes a battleground for protesters and police,” would report (emphasis added):

Rail operator MTR Corp. also has become a protest target, stemming from a perception among demonstrators that it has conspired with authorities to stymie protest action. Stations have been vandalized so frequently in recent weeks that there is a shortage of parts needed for repairs, the rail union has said.

In a city where about 90 percent of journeys are via public transportation, the clashes have left some of Hong Kong’s 7.5 million residents feeling they no longer have any safe spaces, susceptible to arrest or police scrutiny whenever they venture out. Some people are boycotting the MTR, while others suffer flashbacks when they ride the trains.

An “AFP Fact Check” attempting to exhonerate protesters of being caught sabotaging rail that led to a derailment which injured 5 commuters simply notes that protesters caught on camera sabotaging tracks were at a different location trying to derail a different train than the train in question.

Nowhere does AFP attempt to deny the protesters were still very much so sabotaging train tracks and endangering hundreds of lives in the process.

Despite presenting evidence to the public clearly showing protesters sabotaging civilian mass transit infrastructure and thus endangering hundreds of innocent lives – because it wasn’t at the specific location the derailment occured – AFP boldly declares at the top of their “Fact Check” that it was “FALSE.”

The paralyzing “fear” the Washington Post describes but falls intentionally short of properly labelling, and the deliberate sabotage of train tracks AFP attempts to spin and defend is called “terrorism.”

The Merriam Webster dictionary defines terrorism as: the systematic use of terror especially as a means of coercion. Terror is defined as: violence or the threat of violence used as a weapon of intimidation or coercion.

Thus – the Hong Kong protests whose “legitimacy” Twitter is dedicated to preserving – are engaged in terrorism. Twitter is thus an eager accomplice.

None of this should be surprising. The 2011 so-called “Arab Spring” was a region-wide campaign organized years ahead of time by the US government in coordination with other social media giants including Facebook and Google which admittedly trained and equipped agitators to destabilize – and if possible – overthrow their respective governments.

This continues today with many nations now reacting by restricting or banning foreign social media platforms and producing their own domestic versions. Russia and China are two nations in particular that have done this with great success and have attracted constant criticism for it across the Western media under the false pretext of “eroding free speech.”

It is little wonder why Twitter is banned in China.

Twitter is banned in China specifically because it is a weaponized platform – designed specifically to manipulate public perception and serve as a vector for very real “information operations” carried out by the US, aimed at China itself – including China’s special administrative region of Hong Kong.

If mere suspicions of “Russian influence” can induce massive network-wide purges on platforms like Facebook, YouTube, and Twitter to stave off alleged foreign interference in another nation’s internal political affairs – certainly Hong Kong protest leaders like Joshua Wong, Martin Lee, Johnson Yeung Ching-yin, and Jimmy Lai literally travelling to Washington, receiving funding and political backing from the US government constitutes an overt example of such foreign interference and should be moved to the top of Twitter’s purge list.

The fact that Twitter not only has taken no action to expose and stop US interference in Hong Kong, but is actively aiding and abetting it illustrates unmistakable as well as unforgivable hypocrisy shedding any doubt over what Twitter actually is. It is not a social media platform – but a political tool merely masquerading as social media.

This revelation – proven indisputably numerous times and most recently in regards to Hong Kong – should prompt nations around the globe to follow Russia and China’s lead in producing domestic alternatives and regulating Twitter, Facebook, and Google out of their information space.

For Twitter and its most recent purge to uphold the “legitimacy” of Hong Kong’s protesters – the end result is simply proving that US social media platforms are just as eager in reality to purge users and censor content as they claim China is.

Tags:
Previous Article
Is the New World Order a Jewish Conspiracy? No, it’s a Satanic Conspiracy
Next Article
On Psychopathy And Power