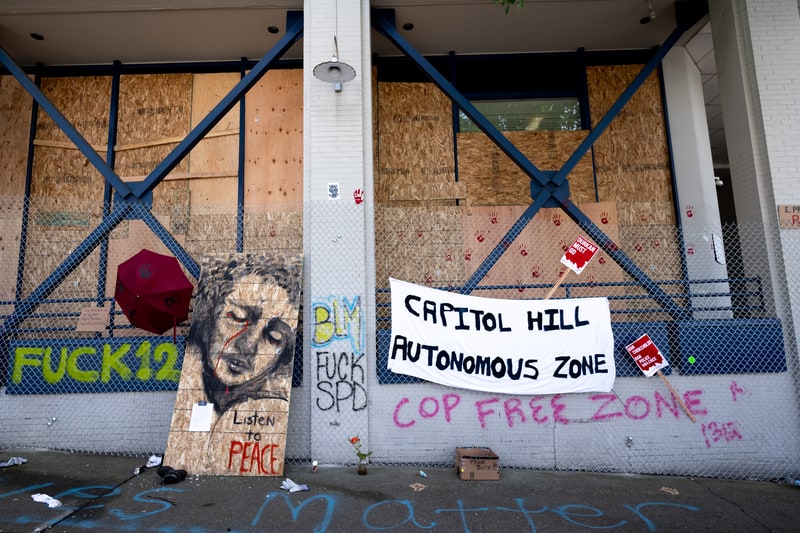 BLM is being used & funded by the ruling elite. Most people view the left-right paradigm as political reality not a ploy to distract & deceive them.

The following is my opinion based on more than a decade and a half of research into ruling elites. Please be aware this sort of commentary is now considered domestic terrorism by the FBI, the national security state, and its propaganda media.

I have decided to post my thoughts on the destruction of America (and Europe) before the election. If current polling is any indication, Donald Trump will not be re-elected. Joe Biden will be the establishment’s teleprompter reader. The Senate will swing over to Democrat control. Democrats and their “progressive” (corporate-financed) allies will go after anyone to the right or left of the establishment, with the exception of groups like Black Lives Matter, which now receive millions of dollars from the likes of Citibank and the Ford Foundation, the latter long known to be a front operation controlled by the CIA.

“The Ford Foundation and Borealis Philanthropy recently announced the formation of the Black-Led Movement Fund [BLMF], a six-year pooled donor campaign aimed at raising $100 million for the Movement for Black Lives coalition,” reports The Washington Times.

The COVID virus is a biological weapon deliberately released in China and from there spread to much of the rest of the world. It did not escape from the Wuhan lab. It was released by the US military while participating in an athletic event in Wuhan. However, it is believed the virus was circulating in November of 2019, possibly earlier. In April, a study published in the peer-reviewed journal Antiviral Research (Vol. 16, April 2020) concluded the COVID virus contains features not present in other viruses. Moreover, the paper argued the virus has no known ancestry and contains elements present in MERS, which the authors say “was not observed in the lineage b of betacoronaviruses.” In other words, the virus is an engineered bioweapon and not a freak of nature. [This is assuming the virus actually exists – see my article here – Ed.]

However, this military-industrial lab-created disease was not designed to kill millions and become the 21st century’s version of the Black Death. It is far more useful as a fear-inducing mechanism.

Here is the game plan as I see it:

1) bring down teetering fiat money and toxic asset driven economy and blame it on the virus.

4) normalize the idea of house arrest and the negation of core constitutional rights.

5) enhance already intrusive and unconstitutional surveillance with “contact tracing” via smartphone and Bluetooth technology (check out this article which details how Michigan authorities used contact tracing against anti-lockdown protesters).

6) foment unrest and exacerbate social ills as a diversion from the planned globalist reformulation of the world economy and society (i.e., “global governance,” aka New World Order).

7) direct the corporate propaganda media to obsessively dwell on irrational race- and gender-based ideology and conflict, thus widening an engineered political divide, creating social chaos and violence, and thus diverting and reducing the threat posed to the elite and the national security state apparatus.

8) keep the narrative focused on Donald Trump; downplay the evolving economic depression, distract attention, and debate away from the elite’s endless wars and neoliberal predation (this was accomplished during the Obama regime).

After Democrats take back Congress and the White House, this last point will kick into overdrive. MAGA, already maligned as Nazis and white supremacists, will be investigated and supporters will be prosecuted and imprisoned. Ditto folks on the left, or those not associated and bankrolled by elite foundations and corporations.

I am convinced the ruling and financial elite consider most of us useless eaters, cattle to be exploited. They have spent the last decade accruing vast wealth at the expense of the so-called 99%. They are responsible for endless wars—now largely irrelevant to the average American—and are responsible for the murder of millions of innocent civilians and igniting social and sectarian violence in the smoldering ruins left in their “creative destruction” wake.

Finally, I sincerely doubt the American people are capable of confronting the elite and returning the nation to a sanity that has been missing for decades. First and foremost, they are unable to break free of the voodoo spell of relentless narrative propaganda. Millions view the left-right paradigm not as a cynically crafted ploy to divert them from the real problem—the theft of the future and present by psychopathic and misanthropic rulers, condemning billions of misery and privation—but rather as a political reality.