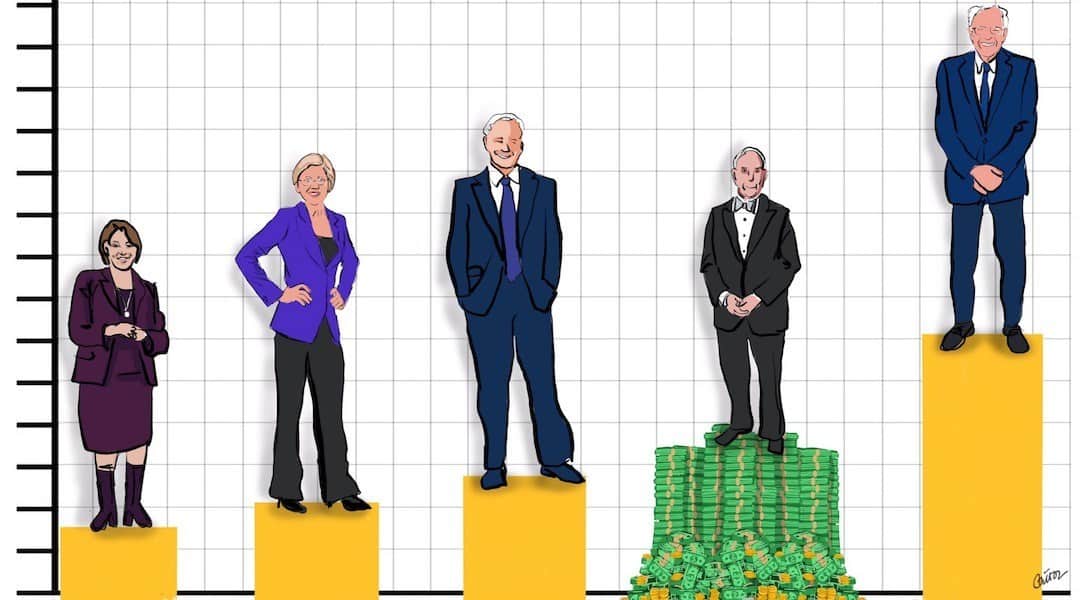 Democracy can be hacked. The mind can be hacked. Bloomberg’s rising polls show the power of billionaire narrative control; money buying your perception.

The power of billionaire narrative control

has been on full display recently. Back in November Mike Bloomberg was polling at four percent nationally and had the highest disapproval rating of any potential Democratic presidential candidate, and understandably so; the man has a uniquely horrible record and no redeeming traits to speak of. Now, after spending $400 million in broadcast, radio and cable ads, $42 million on Facebook ads, $36 million on Google ads, and an unknown fortune on other shady manipulations, a national Quinnipiac poll released last week put him at 15 percent nationally in the Democratic primary. This week national polls released by NPR/PBS NewsHour/Marist and Zogby put him at 19 and 20 percent, respectively.

You can argue against the validity of polls all you like, and surely none of them are pristine representations of public opinion. But there’s no denying that these numbers have gone way up, and there’s no denying that now, approvingly or not, everyone’s talking about Michael Bloomberg. Late night talk show hosts are doing bits about the prevalence of Bloomberg ads. People are making satirical videos spoofing them. I’ve seen parents complaining that their kids recite lines from his ads at the dinner table. It’s a story in itself. It’s saturating social consciousness. It’s very much a thing.

“Nothing remotely like what Mike Bloomberg is doing has ever been seen in US politics – nothing in the same universe,” journalist Glenn Greenwald recently tweeted. “And the threat and danger it (and he) poses to US democracy is equally without comparison.”

Greenwald is of course correct. But while Bloomberg is doing something that is without precedent, his campaign is also highlighting problems with the system which have existed for ages. And in my opinion it would be an unfortunate waste if his campaign came and went without these problems getting more attention than they currently are.

As long as a small elite group are able to manipulate the way people think and vote, then you don’t have democracy, you have oligarchy. If that small elite group happens to be much wealthier than everyone else, then it’s a specific kind of oligarchy known as plutocracy. You can watch this video and this video for some general information on the ways US plutocrats exert control over the political system, and you can read this fascinating thread here for more specific information on how Bloomberg has been stifling opposition and manipulating endorsements out of political figures using his unparallelled spending power.

The degree to which Michael Bloomberg is using his fortune to fundamentally alter & manipulate U.S. politics to his personal advantage extends way beyond ads. I’ve worked against him, covered him as a journalist & worked with his top aides. Here’s their playbook: (1/17)

This has been happening all the time, for generations, and not just with US elections but with Americans’ perception of what’s going on in their world as well. Whether it’s running ads, buying up media outlets, funding think tanks or incentivizing politicians to regurgitate the desired lines, billionaires are constantly using their wealth to shore up narrative control, because they understand that whoever controls the narrative controls the world.

Bloomberg built a media empire. Jeff Bezos bought The Washington Post. Most of America’s news media are owned or controlled by billionaires. Even that so-called “philanthropy” which mass media pundits keep crowing about in the same breath as Bloomberg’s name is actually just another billionaire narrative control apparatus, allowing them to donate a tiny tax-deductible portion of their income in exchange for political influence, and buying them the ability to wear the fancy label of “philanthropist” instead of “sociopathic parasite”.

Billionaires pour vast fortunes into think tanks, which are generally institutions where academics are paid to come up with the most intelligent-sounding arguments possible explaining why it would be good and smart to do something evil and stupid, whether that be the destruction of the ecosystem, regime change in Iran, or further corporate/financial deregulation. They then circulate those arguments at key points of influence.

For a Bloomberg-specific example of think tank narrative control, take the time his donations to the Center for American Progress (CAP) leveraged that think tank into removing a chapter from a 2015 report detailing his Orwellian surveillance program targeting Muslims back when he was the mayor of New York City. Back in 2013 The Nation‘s Ken Silverstein reported that CAP staffers “were very clearly instructed to check with the think tank’s development team before writing anything that might upset contributors.” Sure enough, a former CAP staffer named Yasmine Taeb recently detailed for Democracy Now how “the chapter was flagged by a member of the executive committee who actually previously had worked for Mayor Bloomberg” and “said that there would be a strong reaction by Bloomberg World if this report was released as it was.” At that point Bloomberg had given CAP nearly $1.5 million.

The billionaire class has to buy up narrative control because there is nothing about plutocracy that is sane or healthy; people would never knowingly consent to it unless they were manipulated into doing so. Because power is relative, and because money is power in a plutocracy, plutocrats are naturally incentivized to maintain a system where everyone else is kept as poor as possible so that they can have as much relative power as possible. A glance at what the Sanders campaign has been able to accomplish just with small-dollar donations and grassroots support gives you some insight into why these plutocrats want people working long, exhausting hours with as little spare income as possible.

Nobody would ever knowingly consent to being kept poor and busy just so some billionaires can live as modern-day kings, so they need to be propagandized into it via narrative manipulation. If you’ve ever wondered why it seems like the news man is always lying to you, that’s why.

Whenever I write about the power of plutocratic propaganda, I always get people saying I’m just a conspiracy theorist (and that I have an awful addiction to alliteration). They argue that sure, it’s possible to influence public opinion a bit, but people are free agents and they make up their own minds based on any number of potential factors, so it’s silly to focus on media manipulation as the underlying cause of all the world’s ills.

Oh yeah? If people can’t be manipulated by the wealthy into supporting agendas which don’t benefit them, how come a billionaire presidential candidate was able to quadruple or quintuple his polling numbers in three months just by throwing money at them?

And that’s just one agenda of just one billionaire. There are 607 billionaires in the United States. And none of them are interested in giving up their plutocratic throne.

The unpleasant fact of the matter is that the human mind is far more hackable than people like to believe it is. Just listen to UN Special Rapporteur on Torture Nils Melzer describe how he’d been completely taken in by the horrible mass media smear campaign against WikiLeaks founder Julian Assange prior to taking his case. This is an educated, intelligent and highly compassionate man who, simply because he’d relied on the plutocratic media to help him figure out what’s going on in the world, had an understanding that Assange was a wicked man who was guilty of wicked deeds. It wasn’t until he took the case and began personally investigating the actual facts of the matter without the filter of the plutocratic media spinmeisters that he was able penetrate beneath the layers of narrative distortion to get at the reality of the situation.

Some clever people figured out a long time ago that humans live in two worlds: the real world and the narrative world. The narrative world consists of the mental chatter which occupies the majority of most people’s moment-to-moment interest and attention. The real world is everything else: life as it is, without the stories about what life is.

Nothing remotely like what Mike Bloomberg is doing has ever been seen in US politics – nothing in the same universe. And the threat and danger it (and he) poses to US democracy is equally without comparison.

It’s a menace beyond what words can describe: https://t.co/tmFzlpBKzr

All we can do is make this conscious. Like everything else in this struggle, the solution to the mind’s intrinsic hackability is bringing the light of consciousness to it. Manipulators cannot operate in an environment with too much awareness of their tricks.

Mike Bloomberg is a terrible human being. But at the very least he may operate as a catalyst for this consciousness.