Why Join the Military? Listen to This Advice

Why Join the Military? Listen to This Advice 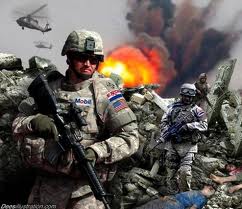 If you want to join the military, especially the US military, be aware that it is an aggressor that essentially works for big multinational corporations to steal resources from weaker countries.

If you want to join the military, stop and think carefully.

Attack is not Defense

Let’s face the truth: the US military, just like the militaries of many other Western powers, have become the global bulldog, the dominant world bully. They routinely attack other nations by launching pre-emptive strikes. They are essentially assassins for hire, like Blackwater or Xe, or a private policing force for rich corporations that run the US Government. The US military may have some men of good conscience inside of it, but as an organization, it has been used for decades and decades as a ruthless attacking machine. They no longer have any honor or moral high ground – if indeed they ever had any.

Attack is not defense. There is a massive difference between invading another country, or aggressively entering their land and airspace without permission, and honestly defending your own land (after exhausting every possible diplomatic and non-military means to peacefully resolve the situation). When was the last time the US genuinely defended itself instead of attacking someone else? The US has invaded over 30 countries since 1945 and has a long history of aggression, attacking China, Iran, Guatemala, Brazil, Chile, El Salvador, Iraq and many many more. On top of that, the US has used false flag operations (attacks upon itself, its own buildings, ships, army and people, made to look as though it was done by an enemy) to pretend it was being attacked, as a way to enter WWII and the Vietnam War. Pearl Harbor and the Gulf of Tonkin Incident were both false flag attacks.

What about the Highway of Death in Kuwait in 1990, when pedophile and Skull ‘n’ Bones member George H. W. Bush ordered the US military to attack fleeing Iraqi soldiers who had already laid down their weapons, broadcasted their acceptance of cease-fire and were retreating back to Iraq? Was that brave and honorable?

Deep in their hearts US politicians know the US military is just for attacking, but you’ll never hear them admit it publicly. George Orwell noted in 1984 that “war is peace“. Saying war is war, or war is killing, or we attack first, is a little bit too honest for our psychopathic leaders and far too unpalatable for the public to accept. These leaders – who are more than content to declare wars, but completely unwilling (themselves or their sons) to actually fight in them – use deceptive propaganda and rhetoric which is always centered around “defending our shores”. The US military is under the Department of Defense. However, it would more truthfully be called the Department of Attack, or the “Department of Attack, Pre-emptive Strikes and Invasions of Weak and Defenseless Countries for the Pillaging of Resources to Benefit Multinational Corporations.”

If you want to join the military, you better understand that attack is not defense; otherwise, you’ll just be engaging in ruthless aggression upon the innocent.

Another piece of propaganda is that you join the military to serve. Whom are you serving? I see a lot of stealing, injuring and killing, but not much serving – unless by serving you mean endangering your life and working like a slave to steal oil, gas and gold from poor countries, so rich banksters and other New World Order (NWO) Controllers can get even wealthier. Former economic hitman John Perkins knows how the game works. He admitted that he used to force third world country leaders to accept the loan shark conditions of the World Bank and IMF, and if they refused, then assassins would be sent in. If that didn’t work, then “the jackals” were sent in – enter the US military. That’s right; international bankers (like the Rothschilds) control countries and their military forces, and they ultimately decide when a war begins.

Don’t fall for the lies. If you choose to join the military, you’ll be selling your soul. Don’t fool yourself; there’s nothing noble about war or killing. “War is organized murder, and nothing else,” said Harry Patch, now deceased, the last known surviving soldier of WWI. Don’t throw away your health or your life, or take someone else’s, for a fake ideal that’s been sold to you by the US propaganda machine.

“The pioneers of a warless world are the young men (and women) who refuse military service.” – Albert Einstein