Or terrorists? Or psychologically unstable? The DHS can help you with that! It’s an old control tactic from the book of manipulation used by tyrants for millenia. If you’re a ruler who is tired of being held to account by your masters – the citizens who you are supposedly serving – there’s an easy way to stop those annoying questions and investigations into how you are running the state’s or country’s affairs. Just have your political opponents branded as extremists! That way, you look sane, rational or normal by comparison. Another handy side benefit is that you can unleash the institution of psychiatry onto dissidents, which means they may get subjected to psychiatric evaluations, tests, big Pharma drugs and may even get locked up – even ones who are totally non-violent and merely have a different political perspective or set of beliefs.

The Department of Homeland Security was created in the aftermath of the 9/11 false flag operation. It is a truly great Orwellian title, because it’s another Governmental agency which is doing the opposite of its name: it’s making us more insecure or unsafe. The only people it’s making safer are those in the ruling class. Check out this image on the right from a DHS manual, detailing what kind of people it is now targeting. 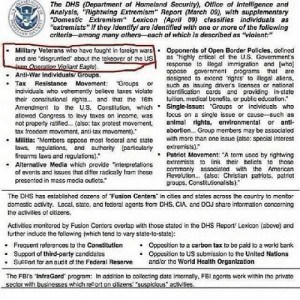 Opponents branded as extremists in the USA.

Shockingly, the above excerpt shows in black and white just how the insecure control freaks occupying positions of power in the Government view the rest of citizenry. They are so scared and desperate to cling on to their power that they need to invent enemies and opponents. Remember, the overwhelming majority of patriots, veterans, alternative media journalists, etc., are not violent or aggressive. They are not threatening to hurt or kill anyone. They are simply standing up for their inherent, unalienable rights, and for higher principles of truth, freedom and justice. So why target them?

Extremism is the New Terrorism

This all shows a number of things, namely that the Government is switching its strategy from one fake enemy “terrorists” to another fake enemy “extremists”, with the advantage that more people can be included in the latter category. Besides, the fake war on terror may have a limited shelf life as people become more aware and conscious that it is a purely concocted notion, faceless and devoid of any real substance.

Lastly, let’s consider this: who’s insane here? If I run around trying to silence dissent and shut people up who disagree with me, even if 99.9% are completely nonviolent and pose no threat to me or society, wouldn’t I be worthy of a psychological examination? Wouldn’t that examination possibly find sociopathic or psychopathic tendencies in my character? Wouldn’t I perhaps be regarded, in colloquial terms, as a kind of “control freak” that can’t stand not being in control of everything? Wouldn’t it make more sense to call me an “extremist”, since it’s pretty extreme to condemn, criminalize and harm others just because I don’t like their views?

Consider it for yourself: who’s the extremist?

Previous Article
Get your Case Dismissed with Broad-Spectrum Legal Remedy
Next Article
Mars Whistleblowers: Captain Kaye the Latest in a Growing List