What is a Holocaust Denier, Anyway?

What is a Holocaust Denier, Anyway? 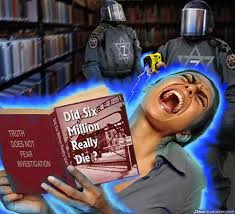 The term Holocaust denier is applied to anyone who questions or even explores the Holocaust, including those who aren’t anti-semitic and just seek truth.

The term “Holocaust denier” is a judgement-laden phrase

thrown out at anyone who challenges, or even questions or explores, the Holocaust, including those who do it with no bad intentions solely in the spirit of truth-seeking. Sadly, the phrase is being as a weapon against free speech and genuine, unbiased investigation. The same goes for the phrase “anti-semitic” which is hurled at those who show healthy skepticism about the Holocaust Legend. Now we even have an “international forum” to “regulate” what constitutes a “Holocaust denier”, such is the blatant and disgusting usurpation of free speech, under the guise of being “politically correct” and “anti-hate” laws.

Disclaimer: I am not Jewish, however consider every human as my brother and sister, including Jews. I have no ill-feeling towards Jews, nor am I anti-semitic. I have no desire to offend or inflame old wounds, rather just to know the truth (how people react to my words is their choice and business). I have compassion for every murder and death that came about from WWII, Jew and Gentile alike. I believe racism stems from a highly ignorant mentality that identifies with form (your body, DNA or race) rather than with consciousness (your soul or the essence of Who You Are).

The point of this article is to maximize truth, not to minimize suffering. There is no doubt Jews were blanketly targeted and, sadly, incurred massive suffering during WWII.

That aside, the evidence surrounding the Holocaust points in the direction that these terms “Holocaust denier” and “anti-semitic” are being used to cover up a gigantic exaggeration at the very least, and possibly even an outright lie, and one that must be set straight if humanity is to live in justice.

In almost every case that I have seen, the term Holocaust denier has been applied to people who are not denying the Holocaust. People such as David Irving, Ernst Zundel, David Cole, Rudolf Germar and others are not saying there is no Holocaust, or that the Holocaust never happened. Parts of it are undoubtedly true; the Nazis did inflict a lot of harm and death upon the Jews. These people are rather saying that:

Some such as Irving are further stating that Hitler himself did not give a single order to kill any Jews, and forbade it, and that it was being carried out behind his back by SS chief Heinrich Himmler. 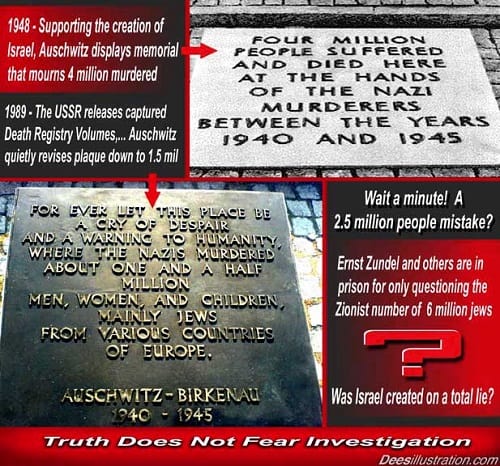 Holocaust revisionism. The USSR downgraded the number to 1.5 million, but it has since gone down even further.

Where did the 6 million figure come from and why was it later revised to 1 million?

Shockingly enough, the number of 6 million Jews being dead was bandied around before WWI – that’s right, before World War I. This website ZionCrimeFactory.com has collected astonishing evidence in the form of newspaper clippings and books from 1900, 1902, 1905, etc. which shows leading Jewish rabbis of the day talking about how 6 million Jews were being persecuted and displaced. Again, this is before either world war! The “6 million” motif seems to have religious overtones. Tom Segev, an Israeli historian, opined that the “6 million” was an attempt to transform the Holocaust story into state religion.

The number has at one time been as high as 11 million due to Simon Wiesenthal inventing another 5 million. Pulled them out of thin air! This even became an official “fact” when US President Jimmy Carter in 1979 issued an executive order, but this was eventually overturned when challenged by other Jews like Elie Wiesel and Deborah Lipstadt. As this Rense article shows, the number has been steadily downgraded over time. In 1990 the Polish Auschwitz State Museum reduced the figure to 1 million that were killed at Auschwitz; however others like historian Jean Claude Pressac, on his 3rd revision, has suggested that the figure may be around 630,000 to 710,000. This was just Auschwitz however so the total number for the whole war is obviously higher.

Why does the number matter, anyway? Wasn’t there a lot of murder and carnage?

Fair question, and in many senses, I agree. The Nazis, whether through methodical killing or general brutal treatment, murdered many Jews or caused them to be killed. However, the number matters in the sense that we now have a lucrative Holocaust Industry worth billions of dollars a year.

Israel continues to this day to extract reparations from Germany almost 70 years after the end of WWII. Jew Norman Finkelstein (whose parents were both Holocaust survivors) says that there is a “double shakedown” by “a repellent gang of plutocrats, hoodlums and hucksters” chasing massive legal damages and financial settlements from Germany and Switzerland, money which then goes to the lawyers and institutional agents involved in procuring them, rather than actual Holocaust survivors. It’s a racket.

It’s not just about Holocaust Industry; Israel uses the Holocaust to silence all critics

These days, in gross disrespect to those killed and to those genuine Holocaust survivors – whatever their actual number may be – the Holocaust is used a political weapon to silence all critics of Israel and Zionism. Think Israel has too much power over the UK and US (here’s former UK foreign minister Jack Straw’s view)? You’re anti-semitic. Think the ongoing genocide of the Palestinians is brutal and unjust? You’re a Holocaust denier. Think it’s ridiculous that Israel has hundreds of nuclear weapons, Iran has none, yet all the attention is put on Iran for peaceful nuclear development? You’re anti-semitic. Think it’s grossly unfair that Israel gets $3-4 billion annually from the US for weapons, etc. when no other country comes close? You’re a Holocaust denier. Think Israel has no real right to exist anyway on land stolen by the British from the Arabs and promised to the Zionists? You’re a Holocaust denier. And on and on it goes.

An important point to remember in all this is that Israel is owned by the Rothschilds. It’s their private country. Ordinary, well-meaning Jews are being used as pawns in the game. And remember, there are many many Jews around the world who oppose Zionism and the Israeli State!

What about the gas chambers? 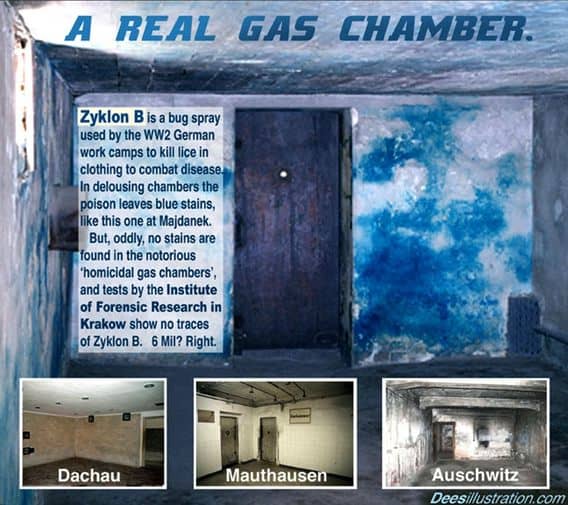 And now to the so-called gas chambers. During the trial between David Irving and Deborah Lipstadt, Irving presented groundbreaking scientific, forensic evidence from the Leuchter Report. This report, written by gas chamber expert Fred Leuchter after a careful investigation of the Auschwitz, Birkenau and Majdanek concentration camps, concluded that was no possible way that Jews were gassed in gas chambers in the way described in the “official” version of history. Here are a few of the most salient points:

You can find additional proof of Leuchter’s expert forensic analysis in paper written by scientist Germar Rudolf, who worked at the renowned, prestigious Max Planck Institute. Rudolf authored the “Report on the formation and verifiability of cyanide compounds in the Auschwitz gas chambers” which concluded the collected and analyzed samples from the walls of the alleged gas chambers in the Auschwitz concentration camp contained only insignificant and non-reproducible traces of cyanide compounds.

Here is yet more evidence:

So was the Holocaust a gigantic lie? Or are some parts true?

I would agree with Irving that it would be most accurate to name the event as a “Holocaust Legend” rather than a “Holocaust Lie”, because parts of it are true. Many Jews did die, just not in the quantity or way it is claimed.

So What is a Holocaust Denier, Anyway?

Let’s get the facts straight:

Again, the point of this article is to maximize truth, not to minimize suffering. Yes, it is horrible what happened to the Jews. No, they did not die in gas chambers, as the evidence shows.

Some may read these and scream “Holocaust denier!” from the top of their lungs. But since when is asking questions or conducting investigation a crime? The slur of “Holocaust denier” is a reflection on those speaking the words and their attitude towards honest research. I am interested in the truth; I couldn’t care less about race or religion in this respect. Jewish deaths were one small part (around 1/60th) of the total number of those killed. Many people from many nations, religions and walks of life died. I am sorry for any and every suffering incurred by people during WWII. May the human race lift itself out of the ignorance of its true nature so that racism and war never rise again.

All this goes to show that the winners and victors write the history books, and that just because you see something everywhere doesn’t mean it is true. The ubiquitousness of a story is no indication of its veracity, especially when Hollywood can churn out Holocaust movies likes Schindler’s List (directed by the Jewish Spielberg) that get watched by hundreds of millions.

At this point the lie has become so deeply ingrained in the Jewish psyche, and in our collective consciousness, that many people unknowingly repeat and defend it without doing their due diligence and research. But nothing good can come from deceit and dishonesty. It’s going to take a lot to truth tellers (“Holocaust deniers”) to set the record straight.

May the truth about the Holocaust come to light.