Voting for Hillary? You May Want to Recall the Clinton Body Count

Voting for Hillary? You May Want to Recall the Clinton Body Count 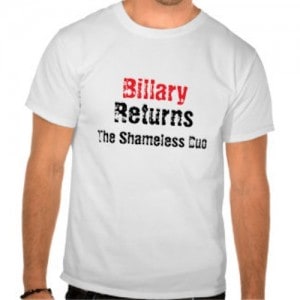 Voting for Hillary, or Billary, in 2016? You may want to recall the Clinton Body Count, the trail of mysterious “suicides” and plane crashes surrounding the Clintons ever since they came to power in Arkansas. Photo credit: Zazzle.com.

If you or anyone you know is thinking about doing such a thing, you may want to read a little further and learn some more about the Clintons, including the Clinton body count. The Hillary Clinton 2016 campaign is now official, so America will be faced with the horrendous prospect next year of having to choose between continuing a Clinton Dynasty or a Bush Dynasty. If indeed Hillary Clinton and Jeb Bush become the presidential candidates for their respective parties, and get elected for 2 terms, do you realize what that would mean? In that scenario, we would virtually have had a Clinton or Bush in the White House from 1980 to 2024 (with the exception 0f 2012-2016)! That would be almost 44 straight years of a Clinton or Bush (remembering that George Bush Sr. was VP under Reagan and that Hillary worked under Obama)! Could it be any more obvious that the US is not a Republic or democracy but rather an oligarchy of the rich and powerful? A bloodline aristocracy may be a better term, since all of the 44 US Presidents have been part of European royal bloodlines, despite having different last names.

A Brief Recap of the Clinton’s Criminal Past

Both this video Hillary Clinton Exposed and The Clinton Chronicles offer a good recap of the Clinton’s criminal history. The fact that they are still around after so many murders and scandals is tribute to their power and ruthlessness, to the fact they have very rich backers, and to the fact that the American public is under a shocking spell of amnesia. This brief list of their scandals comes from the video above:

– The Whitewater Scandal: Bill used the power of office of Governor of Arkansas to build public roads to the Clintons’ private land. They made money with real estate contracts for Whitewater property that included harsh clauses. This resulted in elderly buyers defaulting on land payments and repossessions.

– Hillary’s Magical Trade: Hillary invested $1000 and turned it into $100,000 through insider trading, entering and exiting the markets at the exact right time. According to economists at Auburn and Nth Florida University, 1995, who concluded in their study in the Journal of Economics and Statistics, the probability of Hillary’s trade being genuine and not an insider trade was 1 in 250,000,000! The broker involved was given a 3 year suspension.

– Vincent Foster, who knows Rose Law Firm (Hillary’s old law firm) and the Clintons’ financial secrets very well, dies under highly mysterious circumstances. The day before, on 7/14/93, Bill fired FBI chief William Sessions out of the blue. Bill called a second time and commands that Sessions leave the building immediately. The next day Foster is found dead. Normally this would have fallen under FBI jurisdiction, but the local Park Service took control of the investigation, and were inadequate for the job. A suicide note was mysteriously found 4 days later, allegedly written by Foster, but experts say it is a fake. The official autopsy leaves out wound on neck. The entire scene where the body is found looks fake and set up; Foster had no fingerprints on the gun, no soil on his shoes, and his hands were neatly by his side. Patsy Thomasson breaks into Foster’s safe before the body is widely known to have been found. Bill pretends on live TV at 9pm he doesn’t know about Foster’s death, despite being told earlier. Assistant Attorney General Webster Hubbell on July 20th, 1993, concludes: “Don’t believe a word you hear. It was not suicide. It couldn’t have been …”

– Jerry Parks collected a dossier of photos on Bill Clinton, as ordered by Vince Foster. Foster was ordering Parks to conduct surveillance on Bill, allegedly for Hillary, to see how vulnerable her husband would be if he ran for President. Foster gave files to Hillary. 2 days later Foster was dead. Later Parks is shot and the files allegedly taken from his home.

– Department of Commerce worker Ron Brown dies in a plane crash, after voicing displeasure at Clinton’s White House perverting point of energy swaps. Nico Josic was the ground investigator and was shot to death. It was ruled a suicide before he could be questioned.

“Clearly what the Clinton Administration is trying to do is an orchestrated systematic effort to thwart justice, to thwart the rule of law, to thwart legitimate investigations by the Congress, whether it is impeachment proceedings or regular oversight … to derail investigations (and) derail prosecutions.”

– Prison Population Explosion: The total prison population increased by 673,000 people under Clinton’s tenure or by 235,000 more than it did under President Ronald Reagan, according to a study by the Justice Policy Institute.

– The Clintons ties to human rights abuses in Colombia.

The Clinton body count is quite a long one, full of suicides, car accidents, plane crashes or explosions, people dying of gun shot wounds and people dying from falling out of high apartment buildings. Since the overwhelming majority were officially ruled as suicide, the Clintons enjoy plausible denialability, which the elite regularly use as a legal shield behind which to hide their horrendous crimes. Here is a partial list of those who knew or were close to the Clintons:

July 1978: Susan Coleman is shot in the back of the head after allegedly becoming pregnant to Bill Clinton. Verdict: “suicide”.

August 1991: Danny Cassolaro is found dead in bathtub after investigating corruption including the Clintons. Verdict: “suicide”.

May 1993: John Wilson, former DC city councilman with inside knowledge of Whitewater, is found hanged in his room. Verdict: “suicide”.

July 1993: Paul Wilcher, an attorney, wrote a 105 page letter to then attorney general Janet Reno, describing knowledge of the Mena, Arkansas gun-running and drug-dealing activity. He is found dead in his apartment. The coroner did not rule on the cause of death.

August 1993: Jon Walker, a senior investigator for the Resolution Trust Corporation, looking for source of a suspicious $50 million transfer related to $40 million embezzlement scheme involving Whitewater and the Clintons, falls to his death from a high apartment building. Verdict: “suicide”.

May 1994: Gandy Baugh, attorney, commits “suicide” by jumping out of an apartment building.

October 1994: Florence Martin, who had the PIN to bank account of $1.46 million set up for Barry Seal, is found dead of gun shot wounds to the head.

November 1996: Barbara Wise, worker at the Department of Commerce, is found dead.

Finally, here is a quote from Aldrich who worked in the White House as a FBI agent:

“My name would be mud, my FBI career would be over, and I might even be in danger, if the stories coming from Little Rock were true – about how so many enemies of the Clintons ended up having fatal accidents.” – Gary Aldrich, special FBI agent assigned to the White House

The above list of the Clinton body count is only a partial one.

The account of Cathy O’Brien in regards to the Clintons is very revealing (I wrote about this in the article Hillary Clinton 2016). O’Brien is a former mind control victim who suffered horrific SRA (Satanic Ritual Abuse) at the hands of her handlers, who programmed her to become a sex slave. You can read her story in her book Trance-Formation of America. She explicitly mentions being abused and repeatedly raped by many high-ranking politicians including George Bush Sr., Dick Cheney, Bill Clinton and Hillary Clinton.

Still Thinking About Voting for Hillary in 2016?

Still thinking about voting for Hillary in 2016? Hopefully not, but many will, despite the availability of information out there which shows us that the Clintons are power-hungry psychopaths ready to eliminate anything in their way. Even if you are not familiar with all of the above details in this article such as the Clinton body count, just the recent Benghazi and emails scandals alone are enough to show us that Clinton was involved in gun-running to terrorists in Libya, and flagrant in her disregard of the law by hiding emails, using her personal email and wiping them all clean when she came under scrutiny.

Wake up America. Time to say no to the Clinton Dynasty.

Previous Article
Who is Anti-Science – Free, Critical Thinkers or National Geographic?
Next Article
The Ideal Ratio of Omega 6:3 Fats – And How Both Can Stop Cancer