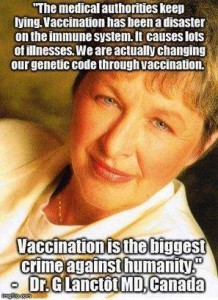 Vaccine fraud is everywhere, and the balance of evidence indicates that vaccines are neither safe nor effective.

The latest scandal is more of the same: vaccine spiking. ABC news reports that a former Iowa State University laboratory manager named Dong-Pyou Han “has confessed to spiking samples of rabbit blood with human antibodies to make an experimental HIV vaccine appear to have great promise.” They further state that “after years of work and millions in National Institutes of Health grants, another laboratory uncovered irregularities that suggested the results — once hailed as groundbreaking — were bogus.”

So basically he spiked the vaccine with animal blood to make it look effective, when it didn’t work. That is not just vaccine fraud; it is outright fraud on a massive scale, because the implications of his actions are that potentially millions of people could receive a worthless vaccine with no benefit but plenty of toxic side effects.

What is the Evidence for Vaccine Fraud?

When you speak to those in Western Medicine and Big Pharma (e.g. the mainstream doctors, scientists and pro-vaccine skeptics) about vaccine fraud, you usually hear the same response: show me randomized, double-blind, placebo-controlled studies proving that vaccines harm, sterilize or kill, or proving there is a connection between vaccines and autism. I can’t find any. However, as much as I understand that doctors and scientists don’t want to pay attention to what they consider to be “low levels of evidence”, and would want only the randomized, double-blind, placebo-controlled gold standard, unfortunately I don’t think that even these can be believed. I wish the issue were as simple as that; but there’s too much corruption and money in the drug, cancer and “disease management” industry.

The problem with getting to the truth of vaccine issue is that so much information cannot be trusted – Big Pharma-funded studies that are rubber stamped by government agencies like the FDA and the CDC. There is an epidemic of massive and widespread fraud, bribery, blackmail and conflict of interest.

Below is just a tiny, tiny amount of the available evidence which casts serious doubts on both the safety and efficacy of vaccines:

There is a plethora of cases where many of the Big Pharma companies have been caught faking studies and vaccines tests.

Vaccine Fraud #2: Certain Vaccines were Admitted and Proven to be Spiked with Known Viruses

The most egregious example of this is contamination of the polio vaccine with SV40, simian virus 40, a cancer-causing virus form monkeys. As I have written about, this may even be the cause of many cases of cancer today. You can see and hear for yourself on this YouTube clip Merck researcher Dr. Maurice Hilleman admitting it.

The CDC openly admits these ingredients are used in vaccines:

Even if vaccines work as claimed to boost immunity, can we accurately describe the injection of such clearly toxic substances into the bloodstream as “good medicine”?

See Clint Richardson’s documentary on this “Lethal Injection: The Story of Vaccination“. You can get it on DVD at TollsForFreedom.com. You only need watch the first 30 minutes to see the evidence of the connection between vaccines and sterilization. He takes the viewer through official government documents (from USGS and BLM) showing that they used PZP in vaccines to sterilize horses (stallions), and shows the same is being applied to humans.

Maybe this is why Bill Gates has said twice in public that vaccines reduce population growth?

There are many examples of this, but I’ll give you just two: a study published in The New England Journal of Medicine (NEJM) reveals that an astounding 97 percent of children affected by a mumps outbreak that swept the Northeast back in 2009 had already been vaccinated for the condition in accordance with recommended government guidelines. ABC reported in the Fordham mumps outbreak that “all the infected mumps patients had the mumps vaccine”, showing that the vaccine was clearly very ineffective.

The above information is just a tiny, tiny percentage of the available information out there showing that not only are vaccines dangerous and clearly not safe, but they also may not be particularly effective either. Vaccine fraud is widespread. Do your research and use the vaccine information at ToolsForFreedom.com to help yourself make an informed decision.

Above all, remember this: vaccines are no match for developing your own natural antibodies and immunity. Boost your own immune system through superfoods, good diet and a healthy lifestyle.