Strikes in Iraq and Syria: US Terror for the New Year

Strikes in Iraq and Syria: US Terror for the New Year 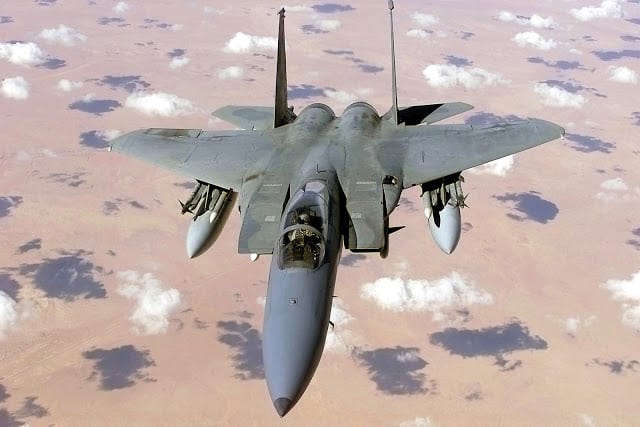 US Strikes in Iraq & Syria, and the Soleimani Assassination, are more US terrorism. It will bolster groups like ISIS (created/funded by the CIA & Israel).

US strikes against targets in Iraq

and in Syria belonging to Iranian-linked militias operating across the territory of both Middle Eastern nations directly before New Year’s marked a new low for US foreign policy in the region. The strikes were soon followed by the assassination of senior Iranian military leader General Qassem Soleimani who headed Iran’s renowned Quds Forces. The combined provocations have led to a proportionate – and so far effective – counterstrike by Iran aimed at US military bases in Iraq.

US Strikes are Goading Iran, Not Defending Against It

CNN in its article, “US strikes 5 facilities in Iraq and Syria linked to Iranian-backed militia,” it was reported that:

US forces conducted airstrikes in Iraq and Syria against five facilities the Pentagon says are tied to an Iranian-backed militia blamed for a series of attacks on joint US-Iraq military facilities housing American forces.

The article would also claim:

Pentagon spokesman Jonathan Hoffman described the strikes against the group as “precision defensive strikes” that “will degrade” the group’s ability to conduct future attacks against coalition forces.

And while the US would describe the strikes as defensive in nature – in reality the US is illegally occupying Syria and is coercing the government of Iraq to accept its open-ended and unwanted occupation there.

Worse still is that the Iranian-backed militias the US struck constitute one of the most formidable forces operating in the region arrayed against terrorist organizations like Al Qaeda, its various affiliates, and the so-called Islamic State in Syria and Iraq (ISIS).

The US narrative of protecting its troops – who occupy the region illegally and in direct contravention to international law – attempts to paper over continued efforts to cling to US hegemony in the Middle East and reverse its flagging fortunes – particularly in Syria where its regime war has unraveled.

Strikes on Iranian-backed militias and their senior leadership are a vain attempt to redraw the quickly changing geopolitical landscape in the Levant where Syria and its allies – particularly Russia and Iran – have come out on top.

Stabbing Iraq in the Back…

All while the US attempts to portray its actions as underwriting regional or even global security – the very nations it has carried out its attacks in have unequivocally condemned them. In Iraq – where there is at least a semblance of legitimacy to America’s ongoing occupation, the Iraqi government has described the attacks as treacherous.

The assassination of General Qassem Soleimani was likewise condemned widely across the region.

Thus – the US has carried unilateral actions inside a nation it attempts to portray as an ally and partner – actions condemned by the Iraqi government itself.

Finally, the CNN article would point out that the recent US strikes represent an escalation between the United States and Iran – amid a wider conflict that spans the region from Syria and Lebanon, to Iraq, to the south in Yemen, and even as far as in Afghanistan where US forces have been waging war for nearly 2 decades along Iran’s eastern flank.

Within Iran itself, the US has organized ongoing efforts to destabilize the nation economically and politically aiming to either coerce Tehran or remove the government of Iran entirely.

The irony of the US claiming it is striking Iranian-backed militias in self-defense or in an attempt to combat “terrorism” is multifaceted.

The US which claims to be waging a global war on terror – has just struck the very forces serving as the front line against Al Qaeda and ISIS. Furthermore, when considering the US and its Saudi allies are Al Qaeda and ISIS’ primary state sponsors, the irony deepens.

When the nations the US claims it is protecting protest US unilateral actions – nations who are the primary benefactors of Iranian-back militias and their efforts to combat Al Qaeda and ISIS and their terrorism aimed at dividing and destroying their nations and the wider region – US foreign policy and its most recent belligerence lays fully exposed.

One must also consider that US actions serve as one of the most disruptive factors driving ongoing regional instability.

The US continues to isolate itself by doubling down on failed policies – and in the process it is resorting to increasingly dangerous and desperate tactics that threaten regional and global peace and stability. Resorting to high-level assassinations represents a rarely resorted-to measure fully illustrating the growing depths of Washington’s desperation.

For nations enduring US belligerence – the process of slowly exposing and countering US foreign policy must continue in earnest. Iran’s pinpoint missile strikes aimed at US bases in Iraq, avoiding casualties represents just such patience – a show of force reminding Washington of what could happen if hostilities widen – and a show of restraint illustrating to the rest of the world that Iran is reasonable even in the face of unreasonable provocations.

The US is already increasingly exposed and isolated. For the US which has waged large scale war across the region with diminishing returns – a handful of additional US airstrikes and assassinations will do little to diminish Iranian-backed militias or their ongoing efforts to move the region out from under decades of US hegemony, aggression, terror, division, and destruction.

For the New Year, the US gifts the Middle East with yet more violence and terror – ensuring the region, its nations, and their people labor under no delusions regarding the source of the region’s ongoing instability and violence. During the coming new year and the years to come, the process of slowly and surely uprooting US hegemony and all that it entails will continue.

Tags:
Previous Article
So The US Is Invading Iraq Again
Next Article
“Iran Must Begin Acting Like A Normal Nation,” Says Totally Normal Nation