Entire US Presidential Election is Fake, From Start to Finish

Entire US Presidential Election is Fake, From Start to Finish 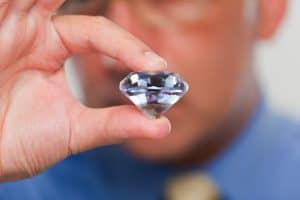 If it looks fake, it probably is: the 2016 US presidential election bread and circus show just keeps getting more surreal, with camera trickery, photoshop fakery and much more.

The US presidential election just keeps getting faker

the more it goes on. Yes, it’s bread and circus time again in America, but this time around the rulers are putting on an entertainment show which has lost its ability to convince and persuade. It’s just too damn fake. We know the US and many other Western “democracies” are rigged one-party states where all the major candidates are controlled, bribed and/or blackmailed. We know that US presidents are selected, not elected. In the 2016 US presidential election, we’ve witnessed all sorts of fakery right from the start. Hillary blatantly rigged the Democratic Primaries in several states (Iowa, Nevada, Arizona and California just to name a few). She colluded with the DNC board, led by the disgraced Wasserman-Schultz, to keep Bernie out of the nomination. Then, at the DNC convention, she pulled out all the stops with a grand display of riggery and fakery, including paying people to sit there to hold her signs, playing white noise machines to drown out protests, having DNC officials turn off the lights above Bernie supporters to plunge them into darkness and all sorts of other dirty tricks.

The fakery continued after Clinton’s  coronation as queen at the DNC. Ever since the topic of Hillary’s health has come to light, Hillary has been in damage control mode, trying to convince a skeptical public she is well enough for the office of president, despite her coughing fits, bouts of dizziness and confusion, struggling to walk up stairs, tripping and falling, bouts of inappropriate laughter, wild crossed-eyed looks and her public seizures (see The Real Hillary Clinton for more info). Wikileaks apparently discovered that Hillary was searching online for adult diapers. Maybe she currently wears them.

Meanwhile, corrupt Hillary continues her campaign without conducting press conferences, which is highly unusual for a US presidential candidate. Zero Hedge reports it has been 273 days (absolute zero) since her last press conference! Clearly we can deduce from this that Hillary is scared of being asked some tough questions, given how flooded she is with scandal after scandal (Clinton Foundation fraud and corruption, email deletions, foreign bribery, pay to play shenanigans, the growing Clinton Body Count, etc.). There’s nothing open and transparent about her; she’s barely holding on, keeping quiet and hoping Trump will shoot himself in the foot some more between now and November 8th. 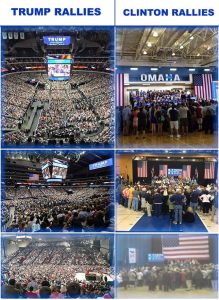 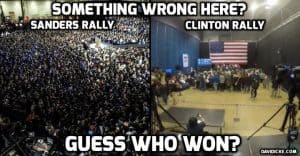 Clinton vs. Trump Rallies: Spot the Fakery Anyone?

Take a look at the above images. The same thing that was happening with Bernie is happening with Trump – they have both been attracting large crowds and filling up stadiums. Meanwhile, the Clinton campaign relies on several forms of fakery to give the false impression that Hillary is actually popular. They have produced blatantly photoshopped images of a Hillary rally (see below). They constantly make it look like Hillary is speaking to a large room by keeping the camera at one angle, putting bleachers or rows of people behind her, and never panning the camera around the room. They have been busted over and over for camera trickery and fakery, but unless you are tuned into the alternative media, you probably won’t see it. 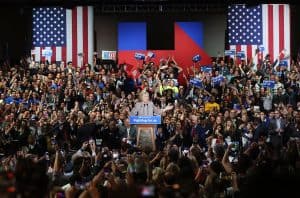 Hillary’s fake photoshopped rally. This is a collage of images. It’s fake!

Was She Even There? Hillary Takes Fakery to a New Depth

It was somewhat stunning, even for someone as fake and fraudulent as Hillary Rodham Clinton, to release a video of a purported rally which is entirely faked (embedded above). Look carefully at the video. There are at least 3 separate people holding smartphones pointed at her, yet when she finishes and exits off the stage, the images reflected in the smartphone screens are not what they should be! They show different images entirely. Was the entire rally “made up”? Is anything about this woman true at all, or are we living in a Wag the Dog/Truman Show movie set?

Bev Harris of BlackBoxVoting.org has done tireless work to expose election fraud over the years. She has recently come out warning the American public of the latest technique in election rigging, which is to fractionalize votes, i.e. make them only worth a fraction (e.g. one fifth, one third, one tenth, etc.) of what they should be (one whole vote). She writes in her article FRACTION MAGIC – PART 1: VOTES ARE BEING COUNTED AS FRACTIONS INSTEAD OF AS WHOLE NUMBERS:

“The results of this study demonstrate that a fractional vote feature is embedded in each GEMS application which can be used to invisibly, yet radically, alter election outcomes by pre-setting desired vote percentages to redistribute votes. This tampering is not visible to election observers, even if they are standing in the room and watching the computer. Use of the decimalized vote feature is unlikely to be detected by auditing or canvass procedures, and can be applied across large jurisdictions in less than 60 seconds.”

This means that with just a little computer code, someone can flip the vote and make, for example, all of the whole votes for Donald Trump suddenly worth only one quarter (0.25) instead of one (1). Vote rigging like this has already happened in the past. The system is already in place. Welcome to the USA, champion of democracy! Can you see now how other nations feel about the US enforcing democracy down the barrel of gun, when things are so utterly subverted and fake at home?

Trump’s Connections to the Shadow Rulers

Although this article has so far highlighted the fraud surrounding Hillary, the point here is not to support Trump. The Donald himself has a myriad of connections and associations with NWO agents such as the head of the Rockefeller CFR (Council on Foreign Relations) Tommy Haas. Trump is also close to Paypal founder, millionaire and transhumanist Peter Thiel, CIA asset and Saudi arms dealer Adnan Khashoggi, as well as Louis Lesser partner of CIA Asset Meyer Lansky (who was involved the JFK assassination). To what degree Trump is influenced or controlled by these men is an open question, however we know enough to say that he has tyrannical tendencies, is an ardent Zionist and a possible or probable pedophile – hardly the choice you want to be given in a free and open society.

DHS and UN to Take Control of US Presidential Elections?

The issues of voter fraud and election rigging have become large enough that Obama was recently asked about it. Not long after this, Jeh Johnson, the head of the DHS (Department of Homeland Security), let slip that his department is considering taking control of the US presidential election (problem-reaction-solution). Johnson tried to claim that elections may have become part of “critical infrastructure”. The DHS is the very same department that was created right after the 9/11 false flag with a fast bill slammed through Congress that no-one had time to read. It’s also the same department that oversees the TSA, which gives airline passengers the choice of molestation or radiation. It’s funny how almost all governmentally-proposed solutions have the characteristic of centralizing more power in the government. Perhaps this 2016 US presidential election will be hard to rig for Hillary (given her massive unpopularity) so her controllers want more power over the election process to ensure she gets in.

As if all the fakery listed above isn’t enough, consider the fact that many top Republicans, neocons and conservatives have openly come out and stated that they would rather vote for Clinton than Trump. Why? Almost certainly because she’s more likely to start foreign wars (against China and Russia), more likely to continue the corrupt status quo and more likely to advance the New World Order agenda in line with the ambitions of these shadow rulers. Those at the top know the fake left-right paradigm is a facade designed to fool the masses into thinking they have a choice. Look at the cosy relationship between George Bush Sr. and Bill Clinton, supposed opponents on opposite sides of the aisle (nothing like some CIA Mena cocaine and Satanic ritual to bond over). However, the 2016 US presidential election is unique in that it appears that some of these guys aren’t even trying to maintain the illusion of freedom.

There’s enough fakery to fill a few hundreds football stadiums with this US presidential election. Hopefully we are about to see it reach a tipping point where a critical mass of people simply refuse to buy into it at all. Once enough people see the “bread and circus” show for what it truly is – a distraction, a fanciful ruse, a facade and a silly game of no real consequence – they will lose confidence in the whole system and begin dreaming of new, better and fairer systems. This, of course, is the worst nightmare of the NWO controllers.