The US Defense Budget: A Bottomless Pit

The US Defense Budget: A Bottomless Pit 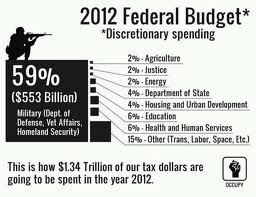 The US Defense Budget is a bottomless pit. With 59% of US tax dollars spent on war and only 6% on education, we can see the US values killing and conquest 10 times more than learning

The US Defense Budget is truly a bottomless pit.

The US allocates a staggering 50-60% of its tax dollars to war. It provokes new wars, funds UAV (Unmanned Aerial Vehicles) or drone attacks in the Middle East and Africa (killing innocent people off Obama’s “Kill List“), maintaining its overseas military bases (more than 1000 bases and military installations in around 130 countries, but the Pentagon is hiding the real number) and expanding its domain by deception and force. The United States has become an overextended empire, bent on conquest and destruction, now collapsing under the weight of a $16 trillion debt. It is utterly absurd that the US government can spend trillions of dollars on war but cannot provide high quality or even just adequate education and health care for its citizens, not to mention maintain its infrastructure, much of which is old, outdated and crumbling. Bridges are collapsing all over the US and the electrical power grid is so old that it is highly vulnerable to being taken out by a natural disaster or terrorist attack.

Why are corrupt US politicians so obsessed with spending money on guns and bombs, rather than investing in educating their young? The US Defense budget is a sad indictment on a nation that spends around 10 times as much on killing than learning. The American empire is in decline, like all great empires of history, due to political corruption and greed. The leaders of the United States are morally bankrupt, controlled by a hidden elite (including the Rothschilds, who also control Zionist Israel) who direct its funding. Ultimately, it is this hidden elite who want WWIII and will use American money, via the US Defense Budget, to fund Israel and the US military in the hope of inciting another world war. They look at America as a nation to be used and destroyed to further their agenda of a fascist One World Government, also known as the NWO (New World Order). To them, America is just the military arm of their operations, as revealed in this great film “The Empire of ‘The City’“. Spread the word. Increasing our awareness is the best way to stop this madness.