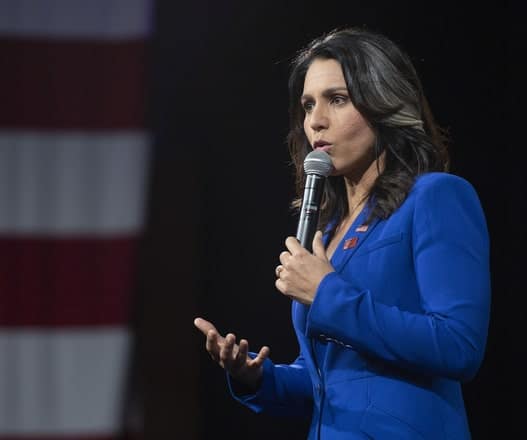 Tulsi Gabbard calls out the DNC (Democratic National Committee) for rigging the 2016 primaries in favor of Hillary against Bernie. It is now marginalizing her campaign and run in the current 2019-2020 primaries by sidelining her and using technicalities to prevent her from participating in the debates.

Tulsi Gabbard, who has at best minimal support by Democrats (around one percent), and zero from the corporate DNC, posted the following video a few days ago:

There are so many of you who I’ve met in Iowa and New Hampshire who have expressed to me how frustrated you are that the DNC and corporate media are essentially trying to usurp your role as voters in choosing who our Democratic nominee will be.

This, of course, is nothing new, but thanks to Tulsi for reminding us of how “elections” are conducted. In fact, the state long ago corrupted the process and has selected candidates for long as anybody can remember.

How is it possible a cognitively challenged and corrupt hack like Joe Biden is number one in the running—or was until Elizabeth Warren took that spot away from him? It’s possible because Biden is a trusted asset eager to do whatever he is told, same as Obama, Bush the lesser, Clinton (a “brother by another mother”), Bush the elder, Reagan… on and on, down the line. Like Hillary Clinton, the Democrat establishment believes it is Biden’s “turn” to read the teleprompter. All the others, well, they’re spoilers.

They are attempting to replace the roles of voters in the early states, using polling and other arbitrary methods which are not transparent or democratic, and holding so-called debates which are not debates at all but rather commercialized reality television meant to entertain, not inform or enlighten.

That replacement happened decades ago. Trump won the election because our rulers left the election process intact, arrogantly confident their handpicked candidates will win because only those who have come up through the system are permitted to run. It’s left intact as a public relations gimmick designed to fool the proles who are, regrettably, all too easy to control—or were until Trump appeared on the scene.

Tulsi is spot on about the “debates,” which are nothing of the sort. Indeed, they are a form of televised bread and circuses—bread because most Americans receive some kind of support from the government, and a circus because all circuses are comical, theatrical, and well-scripted.

As for being informed, that’s the last thing the ruling elite want. They have us believe in fantasies so absurd they may as well be props in a Luis Buñuel film—for instance, killing people in foreign lands is humanitarian and the economy is doing great (never mind the unemployed, the homeless, and record debt, both governmental and personal).

In order to bring attention to this serious threat to our democracy, and ensure your voice is heard, I am giving serious consideration to boycotting the next debate on October 15th. I will announce my decision within the next few days. With my deepest aloha, thank you all again for your support.

This is commendable, although, sadly, an almost transparent blip on the political radar screen. Big corporate media will certainly not take notice, and if they perchance do it will be with snide commentary.

The soft totalitarian machine rejects the socialist palliatives of Elizabeth Warren. She appears to be anti-corporatist, and that is inexcusable. Many of our political and social problems are related to the domination of corporations, most of the crony variety.

Elizabeth Warren will be unable to break the corporate stranglehold on America. It is pure insanity to believe otherwise. The Democrat and Republican parties—one party disguised as two—will not savage corporations with taxation and redoubled punitive regulation, not if they wish to remain in Congress and receive money to run obscenely expensive campaigns.

Warren will be overshadowed by the Hildabeast, Hillary Clinton, who is determined to be president. She will enter the race sometime next year, overturning the apple cart of other hopefuls, all spouting the same wealth distribution nonsense because, after all, a well-trained and ceaselessly indoctrinated public, most on a modern version of the Roman Cura Annonae grain dole, love free stuff (stolen from others).

No way will the DNC accept Elizabeth Warren as the nominee. She will be subverted, the same way Bernie Sanders was.

Most Americans don’t trust or like Hillary, but that hardly matters.

The days of Trump may soon be over. If he’s not impeached on spurious grounds, he will enter the race under a toxic cloud of accusation and unproven high crimes and misdemeanors greatly amplified by a propaganda media. Polls consistently show he is losing traction, and the MAGA crowd is increasingly disillusioned, unable to realize its populist agenda.

I’m sorry, Tulsi. Your effort to unmask the subversion of the election system will largely fall on deaf ears. As of this morning, the above video garnered a mere 800 views. [Update 10/15/19: this video now has around 57,000 views – Ed.]

It will take more than a “debate” boycott to send the message. It will take a revolution to finally drain Trump’s swamp, end the endless wars, and force transnational corporations and foreign governments (most egregiously Israel) out of the bed they have shared for so long with our “representatives,” who are largely nothing more than self-seeking sociopaths on short leashes.

Previous Article
On Psychopathy And Power
Next Article
Turkish Incursion into Syria: US Abandons Kurds