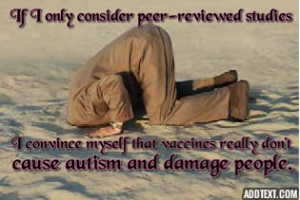 A message to doctors & so-called scientists: you can’t find the truth about vaccines by burying your head in peer-reviewed studies, as the CDC scandal shows.

The truth about vaccines cannot be found

by simply declaring: “I am only going to consider peer-reviewed studies as my source of evidence, and ignore everything else, because anything else doesn’t live up to my standards for evidence-based science“. Why? Simple reason: the evidence is cooked. It’s manipulated. It’s frequently omitted, changed, fudged, modified or just about everything else under the sun to suit the agenda of whomever ordered and funded it, whether it be the Big Pharma companies themselves, or the government agencies they control, like the CDC and the FDA. On one level, careers, power and billions and billions of dollars are at stake, and on another level, the depopulation agenda made official by war criminal Henry Kissinger must go on. There is way too much incentive to lie, cheat and obscure the truth about vaccines, namely that there is plentiful, significant evidence that vaccines cause autism.

The latest example of rampant fraud in vaccine literature is the CDC scandal. Whistleblower Dr. William Thompson, who works at the CDC (but not any more after this), came forward and admitted that he worked on a study in 2004 that showed a very significant statistical relationship between boys who received the MMR vaccine (in this case young black boys) and those who developed autism. The study found that there was a 340% increase in autism among young black boys who had received the MMR shot. When Thompson told his superiors at the CDC about this, what did they do? Covered it up, of course.

In an effort to keep this aspect of the research secret, the CDC redefined the study, reducing the sample size to a small data set so it would not achieve statistical significance. This is outright fraud. The CDC then claimed there was no causal connection between vaccines and autism to keep its client (Big Pharma) happy.

Another point worth remembering is that the “peer-reviewed” concept is far from the gold standard science wants it to be. The peer review process is gravely flawed and easily abused, sad to say. There are many examples of people working the system and fraudulently reviewing their own paper. Take the example of the Journal of Vibration and Control, which had to retract 60 flawed “peer-reviewed” studies, or the Germany-based publishing group Springer and New York-based Institute of Electrical and Electronic Engineers (IEEE) which retracted over 120 papers.

The Lesson: If You Only Look at Peer-Reviewed Studies, You’ll Miss the Wood for the Trees

If you are so focused on hard evidence to satisfy your rational left-brain, you will never realize that you are working with faulty data. You will miss the big picture by being so obsessed with details. Yes, it is important to have evidence to back your claims, but if you fail to understand the gigantic scale to which data is corrupted by moneyed interests, then you will fail to see the truth about vaccines (i.e. that they damage the immune system, cause autism in some individuals and create horrendous side-effects).

That’s the problem with being so in your left brain and so focused on only tangible and material things, or things that can be proven with a high degree of evidence. This mentality thinks of itself as “scientific” but in reality is limited in its perspective and is easily fooled by many aspects of the global conspiracy. The doctors and scientists who cannot but think like this are left-brain prisoners who unwittingly function as gatekeepers for the New World Order, because common people look up to them and believe what they say. White coat = scientific authority, right?

We would do well to recall the experiments done in the 1970s showing the very real dangers of blind obedience to authority.

In conclusion, if you want to know the truth about vaccines, look very closely at the history of criminality of Big Pharma and its governmental lackeys, because you may discover a lot more about vaccines by analyzing their fraud and pattern of coverup, than by reading yet another Big Pharma-funded peer-reviewed study.

Previous Article
Are there Natural Cures for Ebola? Top Antiviral Candidates
Next Article
People Voluntarily Chipping Themselves: Will the Seduction of Technology Lead to Total Enslavement?