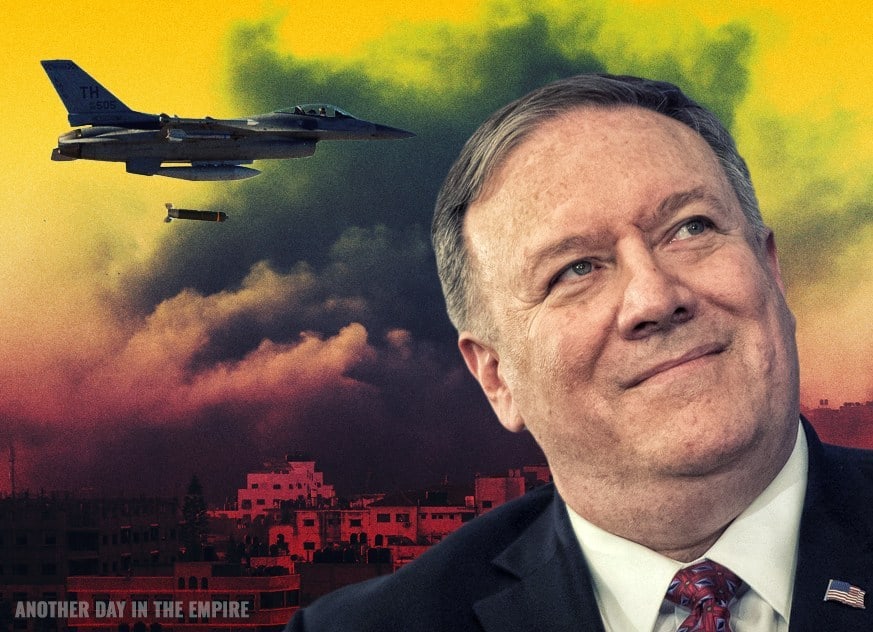 Reigniting War Against Syria? Secretary of State & Zionist Pompeo tries to sell the chemical weapons lie once again, claiming Assad used them in May 2019.

The neocons are not about to give up and admit defeat. Due primarily to Russia, Iran, and Hezbollah, the presence of the Islamic State is now considerably reduced in Syria.

This is, of course, unacceptable for the neocons and Trump’s State Department, so last week Sec. State Pompeo accused Syria once again of using chemical weapons.

U.S. Secretary of State Mike Pompeo said that the United States had concluded the government of President Bashar al-Assad in Syria had used chlorine as a chemical weapon in a May attack as part of its battle for Idlib. More here: https://t.co/NJYi7P2MCp pic.twitter.com/y8XhGtUsNp

Clearly we have lost deterrence when it comes to Assad. Time for the world to stand up and be counted in opposition to barbaric actions like this. https://t.co/4UXbNI1nKa

Reigniting War Against Syria with the Old Chemical Weapons Lie

There is no evidence this incident occurred. This is the case with all of the supposed chemical attacks in Syria.

The use of chlorine was alleged by the Idlib province health directorate but has not been corroborated by monitoring groups or international media. No casualties were reported in the mountainous area, where most residents have fled because of fighting… Morgan Ortagus, a state department spokesman, said in a statement on Tuesday: “We are still gathering information on [Sunday’s] incident, but we repeat our warning that if the Assad regime uses chemical weapons, the United States and our allies will respond quickly and appropriately.”

Pompeo sat on the flimsy allegation for months. It is of use now because the State Department has decided once again to turn up the heat on Iran, this time for supposedly attempting to deliver a large tanker of oil to Syria.

Despite Iran FM Zarif’s promise to the UK that the #AdrianDarya1 would not deliver oil to Syria, it is now transferring oil off the Syrian coast. Will the world hold Iran accountable if this oil is delivered to Syria? pic.twitter.com/z5Ra41n43u

FM @JZarif guaranteed to the UK that the IRGC oil tanker #Grace1 / #AdrianDarya1 would not head to Syria. We have reliable information that the tanker is underway and headed to Tartus, Syria. I hope it changes course. It was a big mistake to trust Zarif. pic.twitter.com/ZJ06MWjvCO

Due to the tweet below, we‘ve decided to end our public coverage of the #AdrianDarya1. As of now, our continued coverage will only be available to our Premium subscribers. This was a misuse of our brand and damage to our reputation. Apologies & thx.https://t.co/v17snXC5n2

The service tweeted it wasn’t happy when it discovered its information is being used as part of Pompeo’s neocon agenda and its propaganda.

Here’s an article (published today) which caught our attention about the tracking of #AdrianDarya1. Sad to see journalists trust official statements over publicly accessible evidence. pic.twitter.com/TxdyY9xgrw

“As we have warned all along, the Iranian regime has once again reneged on its assurances to the international community about its intentions to transport illicit oil to the murderous Assad regime,” a State Department spokeswoman said early last month.

The sale is not a violation of international law or a United Nations resolution. Iran has decided to ignore an EU sanction imposed on Syria in an unrelated matter concerning an individual who owns a Syrian oil refinery and an alleged violation of human rights.

“The Adrian Darya-1—formerly known as Grace 1—was released by Gibraltar authorities on August 15, after Tehran offered assurances that the ship will not make its way to Syria because the Assad regime is under an EU oil embargo,” New Europe reported on September 9.

Iran was not obliged by “assurances to the international community” and the delivery is entirely legal.

The US government is a serial abuser of international law. The current neocon-captured administration violated the Iran nuclear deal and shifted blame to a previous president. It does not believe in diplomacy, preferring instead lies, intimidation, and economic warfare.