The Truth About the War on Drugs – Part 2

The Truth About the War on Drugs – Part 2 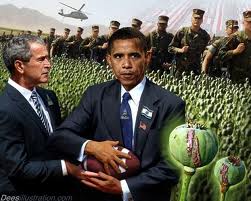 The war on drugs continues its hypocrisy, as US troops closely guarding the opium fields of Afghanistan.

The war on drugs is an illusion,

cleverly designed to give you the impression the Government is doing something to stop widespread drug use and abuse, while secretly encouraging it and profiting from it – both in terms of money and in terms of dumbed-down, incapacitated citizens who are less likely to challenge authority. Following on from “The Truth About the War on Drugs – Part 1“, this article examines the truth about the war on drugs.

4. The War on Drugs Has No Clearly Defined Enemy, Objective or Endpoint

The war on drugs is a war with no clearly defined enemy, objective or endpoint. It’s a war intentionally set up with no way to measure failure or success, and no way to measure when it can be stopped. Like the faceless, abstract, vague War on Terror, the war on drugs has no enemy to capture, no soldier to shoot and no territory to claim. It can go on endlessly, giving the Government a perpetual excuse to introduce more draconian laws and statutes, and take away more rights and civil liberties, all under the guise of making you safer.

Fake, abstract wars suit the Government a lot better than real wars. Abstract wars can be molded and twisted to suit the agenda of those in power a lot more easily than an actual battle or invasion.

5. The War on Drugs Is Waged to Secure a Monopoly for Government and the Big Pharma Cartel

The war on drugs is not being fought to make you safer, or to clean up society. That’s just the cover story they sell the public to make people go along with it. The war on drugs has always been driven by a desire on the part of the greedy elite to create monopolies, eliminate competition and make horrendous amounts of profit. Even if we go all the back to alcohol prohibition, the main force behind it was the Rockefeller family and their oil interests. They funded conservative and Christian groups to go on pious crusades preaching against the use of alcohol on moral grounds, when in reality the Rockefeller cabal just wanted to get rid of access to alcohol as a fuel, since it would compete with gasoline for automobiles.

The same goes for hemp. Hemp is such an amazing and versatile plant, being able to be used for clothing, fuel, paper, rope, medicine, food and more, that it poses a very real threat to the oil industry and its spinoffs, such as the plastic and textiles industries, not mention Western medicine. The demonization of marijuana and the current laws against hemp stem from the elite’s desire to eliminate competition to oil and pharmaceuticals – see Rick Simpson’s amazing story Run From The Cure to see the power of hemp oil as an effective cancer cure with no side effects.

Of course, there has always been a blatant hypocrisy around the war on drugs, as political leaders routinely used the drugs as weapons, or ingested them themselves (e.g. take a look at the Clinton’s cocaine history, or Obama’s cocaine use, or the widespread use of cocaine among bankers), while publicly decrying them. Britain subdued China in the 1800s in the Opium wars by flooding their people with opium and getting them addicted. The US military used the same tactic in Iraq, and just look at how much opium (which makes heroin) production has increased since the US invaded Afghanistan in 2001 and started guarding the opium fields!

Indeed, governments in general use drugs to weaken the spirit, intellect and motivation of their subjects – thus making them more docile, servile and obedient. Governments want populations that are easy to control, that do not think critically or threaten to rebel. The latest hypocrisy surrounding the war on drugs is Operation Fast and Furious, where now the ATF (an agency of the US Government, the Bureau on Alcohol, Tobacco, Firearms and Explosives) was found to have been smuggling weapons across the Mexican border to aid the drug cartels there.

6. The War on Drugs is Futile

The war on drugs is completely futile. As mentioned earlier, it has no defined standard by which we could declare its success and end. But even if it did – even if the stated aim were to completely free the streets of drugs and make them completely unavailable to the public – how could this ever be achieved? Humanity has an inner drive to explore its own consciousness, desires and mind. This can never be suppressed, only redirected at best. Every prison has a blackmarket drug supply. If you can’t keep drugs out of prison, so how can you possibly keep them out of a “free” society? Marijuana or hemp has earned the nickname “weed” because of its ability to grow just about anywhere. How can you hope to police every square foot of space on the planet to stop the cultivation of a plant? It is an exercise in futility.

In conclusion, the war on drugs is farce fueled by the monopolistic desires of the wealthy elite. Spread the truth far and wide about it, and don’t be fooled when lying politicians make speeches about trying to clean it up.