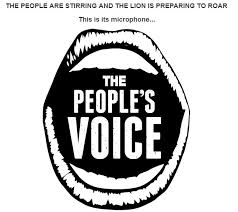 The People’s Voice is a daring idea of David Icke

– renowned conspiracy, truth and consciousness researcher – to start up a new internet radio and TV broadcasting center to go worldwide 24/7 putting out information that the highly-controlled mainstream media will not touch. It’s a plan to give a voice to those who are being silenced. It’s a plan to give a platform to those who are censored, because their opinions and perspectives are too uncomfortable, inconvenient and dangerous for the Establishment.

With outstanding journalists and reporters Luke Rudkowski (WeAreChange.org) and Max Igan (Crowhouse.com) already jumping on board, and many others sure to follow, the People’s Voice could become a giant central hub of cutting-edge information. There’s no doubt that consciousness is rising all over the world, as more and more people are becoming disillusioned and downright angry with the manipulation and corruption. Having a massive central hub that will not be beholden to corporate interests will be a truly important step in reaching even more people with messages of truth and freedom and changing the global consciousness for the better.

Support The People’s Voice with a donation if you can

The People’s Voice needs to raise £100,000 to get off the ground – and to date they have raised three quarters of that amount. However, that is just a minimum, and the more the better, so if you can, chip in some amount to help make this idea a reality. Click here to donate: www.indiegogo.com/projects/the-people-s-voice.