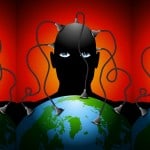 Governments worldwide use the mainstream media to carry hidden subliminal mind control messages, such as: “Do Not Question Government”.

Subliminal mind control has been used on the public

en masse for over half a century, especially since the end of WWII with the US Government inheriting Nazi mind control techniques after the war. The shocking video above was played frequently on American TVs during the 1960s and 1970s. At first glance it appears normal enough; the words to the US national anthem and some heart-stirring American imagery. But everything is not as it appears in this world. There is deception everywhere, if you are aware enough to spot it. A closer examination of the video when played at slow speed shows that there is extra text embedded in the video behind the words you see. In other words, there are subliminal messages inserted. The US Government has been caught red-handed using subliminal mind control on its own citizens.

Science has long shown that when we sit down to watch television, within around 30 seconds, we relax and our brain shifts into alpha waves. While this means TV can be a useful recreational tool to relax, there is also an inherent danger in it, because when we are relaxed, our guard is down and we are more susceptible to suggestion and influence. Sadly, there are power-hungry individuals out there who exploit this opportunity to control others.

Subliminals are intended to bypass the conscious mind. They go straight past our mind’s guard/filter and go deep into our subconscious, where they become more like commands or truths, which we unconsciously follow and incorporate into our belief systems. Positive affirmation and self-help programs use this fact to try to benefit people, whereas Government uses subliminals for mind control.

What subliminal mind control messages did the Government embed?

These are the subliminal messages hidden in the above video clip of the US national anthem. Play it slowly, pause it and watch it carefully to see them:

And to top it all off, this last subliminal sums it all up pretty well …

DO NOT QUESTION GOVERNMENT

Do you still think the Government cares about you and is there to protect you?

The very existence of mind control subliminals utterly shatters the myth that Government is good, or neutral, or not that bad, or incompetent. There is absolutely no way to excuse or hide this. It’s flagrant mind control.

And, given how much more we have moved into a tyrannical Big Brother surveillance state since the 1960s, what kind of subliminal mind control do you think the elite are using on the general population nowadays? Find out by reading part 2 of this series.