Sovereignty and the Way to Overcome Banks, Judges, Bureaucrats and Other So-Called Authorities

Sovereignty and the Way to Overcome Banks, Judges, Bureaucrats and Other So-Called Authorities 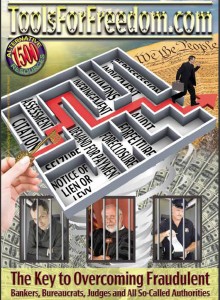 There are peaceful, lawful ways to get your case dismissed and get traffic tickets and other fees and fines overturned, by learning the principles of sovereignty.

Sovereignty – the state of being sovereign, free, independent and self-governing – is the real key

when it comes to overpowering parasitic entities. Think about it: do fraudulent bankers, bureaucrats, judges, police officers and all other so-called authorities really deserve your trust, allegiance and obedience? Would you trust someone who deceived, cheated or robbed you? This is one of the biggest questions facing humanity today, and as governments worldwide become increasingly oppressive, it’s an issue on which everyone must take a stand. However, there are even bigger questions waiting for you if you decide to stand up to bogus authorities: What’s the best way to deal with them? Can you overcome them? If so, how? Each of us will have to choose what kind of world we want to live in and help create, and whose vision we will help support. Society is becoming increasingly polarized, not just in terms of those who have and those who don’t have, but also in terms of those who stand for war and support tyranny, and those who stand for peace and support sovereignty.

Let’s begin this by looking at the housing market. Honest, hardworking American families are being evicted at a scarily rapid rate as foreclosures skyrocket across the country. The banks are in a frenzied asset-grabbing spree, using the rule of force rather than the rule of law to seize as many houses as they can. Some may already be familiar with the fact that banks have no right to seize a house when they used deceit in the first place during the creation of the mortgage loan contract (see “How I Clobbered Every Cash-Confiscatory Agency Known to Man” and “How to Stop a Foreclosure With a Single Question to Your Banker” for more info). Banks do not loan you anything – they simply monetize your signature. New money is added into the existing money supply at the time of loan. That money didn’t exist before you borrowed it! The people really do have the power: each of us is powerful enough to sell our signature for cash, because we form our own line of credit, backed by our ability to generate products, services, employment and economic activity.

Foreclosures are a part of a long-term evil strategy to turn something that is essentially worth nothing (fiat money, backed by nothing, with no intrinsic value) into something worth a lot (land and natural resources). The Money as Debt series (part 1, part 2 and part 3) are highly recommended to explain this system in simple language. Banks have been set up to gradually shift all of the world’s wealth to a small minority who think of themselves as the ruling class. Foreclosures are a giant scam with many layers. As mentioned above, the first layer is that the bank never engaged in a lawful mortgage contract with anyone since it never brought anything to the table to exchange. A second layer is that the banks often can’t even produce the mortgage note, unlawful as it is, to show there was a contract! This is due to the last decade’s craze of depository banks bundling mortgage loans and selling them to investment banks as CDOs (Collateralized Debt Obligations). The mortgages were re-bundled and re-sold so often that the end creditor holding the note was far removed from the initial bank contracted with. A third layer is that banks have become so greedy that they have recently resorted to outright fraud and force by grabbing people’s houses who never had anything to do with them in the first place. Some banks have actually been seizing houses from people who are not even their customers, people who paid cash for their house and own it outright!

As outrageous as this is, the phenomenon of so-called authorities intimidating and extracting money from the public is not limited to the banks. We are also seeing the US Federal Government, which is a private corporation run for profit just like any other company, use its executive and judicial branches in concert to trick you out of your hard-earned cash. Police officers are issuing more and more traffic citations to meet their monthly “fleecing the public” extortion quotas, and judges dress up in their black robes (symbolic of their occult worship of Saturn, god of tyranny and strict rule) to act out their part in the game to pretend you’re getting a fair trial. You’re not! In cases of victimless crimes (e.g. traffic infringements), how could you possibly be getting a fair trial when the judge and the plantiff get paid by and represent the same side (the State)? Conflict of interest anyone?

If we have the awareness to remove our blinders, to look at what we’ve been taught and discard those parts which are blatant propaganda and brainwashing, we can see the situation clearly: the Government has been hijacked by the power-hungry and twisted into a revenue-extracting machine designed to gradually suck all the money and resources out of the public and into their centralized coffers, but given the façade of legitimacy so people will go along with it. However, as Gandhi said, an evil system never deserves your allegiance. Complying with it and obeying its decrees will only help perpetuate the injustices it is inflicting. Instead, we need to consider the best way to handle the bogus authorities running this system. And to do that, we need to rise to a new level of consciousness and power before contemplating any solutions.

Let’s remember the all-important point here: humanity created the system, and humanity continues to create it anew each day by agreeing to it, giving it energy, life and its very existence. Each one of us is a sovereign, infinite being who existed before the idea of “government” and who chose to create, use and partake in that notion. The founders of the US Republic literally existed before it and decided to set it up to serve themselves and all who lived in that country at that time. We are the creators, masters and rulers of “government” and if we don’t like our creation we can change it to something we do like. The Declaration of Independence affirms that once a government fails to do what it was created to do, it is the “right of the People to alter or to abolish it.”

We have a few choices of how to deal with authorities, and what we’ll choose will depend on our state of consciousness when deciding. We could obey them out of fear and pay them whatever they want. This option is like caving in to a bully. The demands never stop and will become greater and greater until you are exhausted in one way or another. Alternatively we could fight them out of anger and get violent. This option is like throwing fuel onto a fire. It gives them ammunition to get even more forceful and violent, and provides them with an excuse to pass even stricter rules curtailing your freedom. Neither option seems appealing, because both come from a place of disempowerment, either fear or anger, the latter being the desperate attempt to get power when you don’t have it.

The option which guarantees freedom and which gets parasitic authorities off your back forever is to stand up and peacefully assert your rights, to claim and remain in common law jurisdiction, refusing to move into commercial jurisdiction or give them any power over you. There are many wonderful people who have formulated their own unique ways of doing this. Take a look at the work of Dean Clifford, Robert-Arthur: Menard, Mary-Elizabeth: Croft and Bill Foust. John Harris has a brilliant way of writing a simple phrase on official forms and the outside of envelopes which stops agencies dead in their tracks. Marc Stevens has come up with some ingenious lines of questioning to get your case dismissed and thrown out of court before it even starts. Other fantastic freedom-preserving, sovereignty-promoting techniques to turn the tables on counterfeit authorities include items “Copyright Your Name and Use it to Ward Off Authorities“, “How to Stamp Your Paychecks to Render Them Non-Taxable“, “How to Outwit a Judge in Court (and Charge Them a Fee Every Time They Order You)“, “A Complete Course in Sovereignty“, “Incredible Legal Remedy to Get Any Case Dismissed in Court” and “Redeeming the Strawman“.

Above all, this is all about you! It’s about you getting past the programming or fear that says “You can’t do that”, “You’re not meant to do that” or “It’s immoral to do that.” The truth is that the world needs you to challenge the darkness, or else you’ll be handing over a world of fascism to your children. Become responsible and be your own authority. Governments survive on borrowed power from their citizens. Their citizens can reclaim that power anytime they want, because they are the true rulers. You can always take power back from any of your creations and create something else instead if you wish (see “Escape the Rat Race and Achieve Total Financial Independence“). Sovereignty is our undeniable birthright. Let’s stand up, peacefully assert our rights, believe in ourselves as magnificent creators who are part of an empowered People, the true rulers of the world.