Sovereignty: Every Generation Must Fight for Their Rights

Sovereignty: Every Generation Must Fight for Their Rights 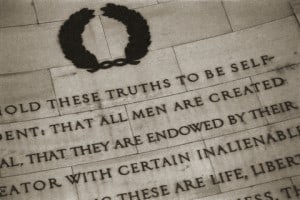 The Declaration of Independence lays out some of our inherent rights – to life, liberty and the pursuit of happiness – but every generation has to win them over

When it comes to sovereignty, every generation must fight for their rights, again and again,

else their rights will lapse and Big Government will step in to the power vacuum. When it comes to an individual’s sovereignty, a right not asserted is a right which is forgotten, disregarded and, in practical terms, non-existent. Rights that exist in theory serve no purpose.

History is cyclical. Those who look into it can read about the rise and fall of civilizations that has occurred from the beginning of recorded history – and probably long before that too. Humanity as a whole has struggled to find the right way to balance power, whether it be on the micro scale among couples, partners, families and communities, or on the macro scale among states, corporations, governments and nations. One thing is obvious about the balance of power – it cannot be overly centralized or concentrated in one place if you want to maintain a free and peaceful society. Absolute power corrupts absolutely, as the saying goes. We have seen so many examples of tyrants, despots and cruel monarchs gradually take power until eventually they rule ruthlessly over the masses – Caesar, Hitler, Stalin and Mao to name a few.

To create a sustainable, free and peaceful society that respects the sovereignty of each of its members, power must be decentralized. Decisions need to made at a local level, as far down the chain of command as possible. Power must be given to as many people as possible, distributed far and wide and as evenly as it can be. This usually comes along with the negative effect of less efficiency, but that is undoubtedly better than less freedom. However, it is possible that we can creatively find ways to restore that efficiency, if we put our minds to it.

Every generation must step up and assert their rights, over and over. The battle for freedom and sovereignty must be fought and won, again and again. It’s the cycle of life and civilization. And it entails putting your time, energy and even life on the line for what you believe. Sovereignty, freedom and liberty is the very essence of life. What is the point of living as a slave? There are countless men and women who have fought this battle before you were born. Some you may know, others you will never know. However, the right to be Who We Are, make our own decisions and choose our own fate is the most precious gift of all.