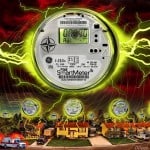 The smart meter blood analysis above showed the effects on blood cells after 2 minutes exposure to smart meter radiation. In all cases the blood showed degradation.

in the video clip above reveals some rather shocking effects. In all cases shown, the blood was degradated, meaning the blood cells were in a weaker, more diseased condition than before the exposure to radiation from a smart meter. This clip is an excerpt from “Take Back Your Power“, an insightful documentary and critical investigation into smart meters. It is good to see more and more scientific evidence such as this smart meter blood analysis being conducted, so as to provide concrete proof of the dangers of these meters – which are weaponized spy devices, and quite detrimental to human health.

With Fukushima in the news again recently, people are becoming more aware of nuclear radiation, which is a form of ionizing radiation. Although this is the most lethal kind of radiation, it doesn’t mean that non-ionizing radiation is somehow “safe”. On the contrary, there are now numerous scientific studies showing RF (radio frequency) and MW (microwave) non-ionizing radiation (the same kind used in cell/mobile phones and the wireless industry in general) to be harmful to human biology, animals and plants. Even at low power, acute and chronic exposure to RF and MW non-ionizing radiation can result in negative health effects such as calcium ion damage in cells, endothelial cell dysfunction, nitric oxide depletion, oxidative stress, melatonin disruption, blood-brain-barrier leakage, DNA damage, sperm damage and more. Glucose metabolism changes within the brain are observable after just minutes of cell phone usage.

Smart meters are part of a slick marketing campaign to label dangerous technology as “smart”, technology that not only threatens our health, but also our privacy. Take action to protect yourself and your family by reducing or eliminating your exposure to RF and MW-emitting devices, such as Smart Meters, cell phones and WiFi routers and devices. If you need help stopping the installation of a smart meter on your property, replacing an existing one or simply learning how to protect yourself from smart meter radiation, you can find some resources on Tools For Freedom.