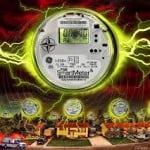 The SMART deception is the propaganda surrounding the technology of the planned centralized grid of control. Smart technology is actually spy technology.

The SMART deception is in full swing,

as we are being sold the idea of green, smart technology for every aspect of our lives. Yes, our self-appointed rulers have decided that we’re all going to have smart phones and smart meters connected to a smart grid driving smart cars in smart cities. As usual in this upside-down world, however, you need to invert the meaning of the presented word or theme if you want the truth. Substitute the word “smart” for “spy” and you’ll be much closer to unraveling the SMART deception. There’s nothing particularly “smart” or intelligent about radiating the hell of out humanity with carcinogenic non-ionizing mobile phone and smart meter radiation. The entire “smart” phenomenon is all about one word: control. However, it sneakily hides behind the green mask of sustainability.

The ubiquitous Smart phone has become a cornerstone of the SMART deception, since it’s getting to the point where almost every person on the planet has one, even in poorer and developing countries. Like many new technological gizmos, we have to ask the important question: are we using the phone, or is the phone using us? Who’s controlling who? Many sources such as Infowars have exposed the SMART deception: cell phones use your microphone to listen to you and your camera to take pictures of you, without your knowledge or consent. Furthermore, it’s been common knowledge for a long time that app companies and service providers can easily use GPS technology to pinpoint the location of any smart phone user.

Smart Meters, which are essentially weaponized spy devices (the biggest manufacturer of smart meters is the multinational corporation GE, General Electric, a weapons manufacturer), are another pillar of the SMART deception. The proclaimed benefits are enhanced energy security, reduced greenhouse gases, improved urban air quality, increased grid asset utilization, but the reality is an invasive EMF attack on our health, finances, privacy, and security. The film Take Back Your Power reports that in New Zealand, smart meters caused 422 fires; that in the US, Canada and Australia, they have been causing electricity bills to rise by 200%; and that in the US, they are a violation of the 4th amendment right to security and privacy in your home. Smart meters literally track every single use of electricity in your house, data which is later sold to 3rd party corporations for profit. It’s a technocrat’s wet dream of control freakery!

Smart meters are also highly vulnerable to being taken down. One node can be hacked, and whole sections of grid can go down. Stupid meters would be a more appropriate term!

Take Back Your Power also reports that utility companies admitted under oath that their smart meters generated 14,000 spikes of communication (i.e. EMF/RF fields) per day, some 190,000 pulses per day. This is an incredible amount of non-ionizing radiation, which the WHO has categorized as a class 2b carcinogen. Of course, smart meters will link into a whole smart grid, a wireless system that turns every device or appliance into a transmitting and receiving antenna node on the system. This will turn entire cities and swathes of the countryside into a giant EMF soup. Smart meter EMFs have already been shown to kill bees. If we have lost the right to a healthy environment, we have lost all rights.

On top of this, many people are being told they cannot opt out; or, if they do want to retain their health and privacy and can choose to opt out, they have to pay more. If you want to not be harmed, you must pay extra fees. That’s extortion (however, they are ways to fight back against smart meters).

Another aspect of the SMART deception is that many so-called smart devices (such as the Amazon ebook reader kindle) are not fully yours. You don’t own them completely. Giant multinationals like Amazon can reach into these devices and actually erase content from them – without you knowing and without giving you notice! This happened recently when Amazon decided to erase the contents of, ironically or not, two George Orwell books (Animal Farm and 1984) from someone’s kindle device. Amazon claimed that the books were mistakenly “published” on its machines and were actually bootlegged copies. Similarly, Amazon also deleted the contents of a customer’s Kindle without warning or adequate explanation.

In addition to Kindles, remote control over other Smart devices is already a reality. A lot of computer software communicates in the background with its home servers, and thus is open to “updates” that can alter content. The NSA uses malware — malicious software remotely implanted into a computer — to change the way the machine works. The Stuxnet code that likely damaged 1,000 nuclear centrifuges in Iran , and which likely was the cause of the Israeli Mossad false flag attack on Fukushima, is a prime example of remote control of computer systems.

The SMART deception gets even worse here, because with smart phones, smart meters and smart devices, at least you have some kind of choice whether to possess or use them or not. However, with smart street lights, you no longer have any control. Infowars reports that “the company behind a new smart street lighting system which is being rolled out in major cities like Las Vegas admits that the technology has the capability of analyzing voices and tracking people, features that will aid the Department of Homeland Security in “protecting its citizens.”” So, we are rapidly moving towards a world where you can be filmed and overheard just about anywhere if you are in a big city. And that leads us to the next aspect of the SMART deception: smart cities.

Smart cities may have the potential to introduce some great city planning and alternative energy sources to the table, but as always, the question is: who will administer them? The same New World Order group calling the shots today? With all the power in elite hands, these cities could easily become glorified electronic concentration camps with strictly regulated and tightly controlled limits on where you live, what you can do in your own apartment, when and how you travel and much much more. Everything you do will be tracked, traced, chipped and monitored 24 hours a day, 7 days a week.

Finally, we’ll finish off the whole SMART deception saga with the smart wig. It seems there is really no item that cannot be renamed “smart” and equipped with some kind of microphone, nano-chip or micronized spying device. I’ve said it before and I’ll say it again: if we’re not extremely aware and careful right now, we will help create a world where there is literally no escape from all these smart devices, harmful EMF radiation and constant Big Borther surveillance. The Government will literally be in your head and there’ll be no way to get it out.

I am not anti-technology. I am pro-technology, so long as it is genuinely used to serve humanity, not enslave it.

We Need to Wake up to the Smart Deception

Is all this technology really helping us evolve? It’s convenient, but it’s being used to enslave us, and it’s also making us less reliant on our own abilities and instincts. David Sasaki points out that “there is a real risk that as our lives become more automated we become more like automatons. We will follow the guidance of our smart phones without reflecting on how we live our lives, and how we engage in our communities.” He recalls the instance of Japanese tourists driving their car into an Australian bay because they followed orders from their GPS over their own eyeballs. We need to wake up to this SMART deception, fast, before we all end up as cogs in a giant machine.

Visit ToolsForFreedom.com for solutions to the smart deception.

Previous Article
Gene-Eden Review: A Natural Anti-Viral Supplement to Kill Herpes?
Next Article
Agenda 21 – How Would You Like to be Forced into a Human Habitat?