another month, another false flag operation occurs on American soil, it seems. These false flag shootings are getting pretty predictable now. Let me consult my checklist:

The script is becoming pretty easy to read.

Check out the clip below. The girl on the right says “my director talking?”! Talk about a dead giveaway these two are crisis actors!

Watch the clip below. In the shop, one of the alleged shooting scenes, there is a large box leaning up against the counter, with the label “glass” on it. Who knew about the shooting so far in advance that they ordered the glass ahead of time?

Check out the clip below, showing evidence of multiple shooters:

Store employees just cleaning up blood like normal trash? Give me a break. It’s a biohazard material! There is no way this is real! 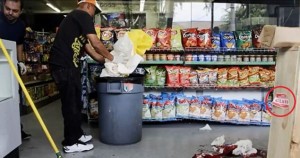 Look at the fake blood, being cleaned up like it was normal trash!

Watch the clip below. What about this guy? Do you really think you would come out and give an angry speech like this right after your child was killed, when you would be in tremendous shock, pain and grief?

We are told that Elliott Rodger was the son of Peter Rodger, assistant director of The Hunger Games – the dystopian film depicting a New World Order future of two classes (the ultra rich and the super poor) where people are fenced into separate districts, and where poor people are chosen to fight each other to death in a Satanic ritual for the enjoyment of the rich. Also, is it just a coincidence that Janet Napoliatno, former DHS head, just happens to be the President of UCSB, one of the alleged shooting scenes?

Check out the clip below at the 4:24 mark. Why would someone report to the police that they had “3 candles stolen worth $22”? That is the most random piece of information. Could it be the elite secret societies communicating to each other through numerology and symbolism? Remember, the Skull ‘n’ Bones Society uses the number 322:

This is just a smattering of the evidence available to show you that the Santa Barbara shootings were yet another sick, sad, sacrificial false flag operation on American soil – to scare you into giving up your rights and giving away your power to the very same tiny elite that planned it. Be awake. Be aware.

Previous Article
Mars Whistleblowers: Captain Kaye the Latest in a Growing List
Next Article
The Ultimate Purpose of GMOs