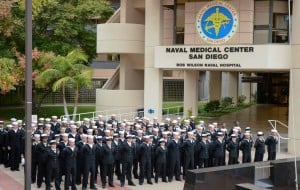 The San Diego Naval Medical Center shooting is reported to be a false alarm. Is there a deeper purpose to it? Image credit: Statesman.com

is reported to be a false alarm, in breaking news. This article will be updated as the story develops. Around 8am local time today, January 26th, 2016, police were called with a report of alleged shooting in the basement of the San Diego Naval Medical Center in California. They arrived on the scene and thoroughly checked out the basement of Building 26, where the shots were reported to have been heard. So far, they found nothing. According to the LA Times, ““Apparently someone said they heard three shots in the basement of Building 26. Maybe they did or not is not the point; that’s what they reported, so that’s why we responded accordingly,” said Jon Nylander, Navy spokesman. “We haven’t gotten any reports of any injuries.”” The article further stated that the police enacted a school lockdown in the vicinity of the San Diego Medical Center: “Three San Diego Unified schools were temporarily placed on lockdown “as a precaution,” the district announced on Twitter. Roosevelt Middle School and San Diego and Garfield high schools were all locked down and “students, staff are safe,” the district said.”

False Alarm Shooting: Random Event, or Is There a Purpose To It?

So far, it appears from reports that it’s a false alarm. If it’s real, then no one appears to have been killed or injured. The question must be asked: is this just a random event, or is there a deeper purpose to it? Specifically:

1. Is this San Diego Medical Center false shooting another story to keep people in a state of gun fear, worried that another mass shooting could occur at any time and place in a neighborhood right near them? Is it a more subtle attempt (in comparison to a false flag mass shooting) to reinforce the imagined need for gun control, without the need to resort to a blatant false flag attack with a mind controlled patsy and crisis actors?

2. Is this event designed to keep people in fear in general? Even though the police “saved the day” by checking everything out, is the overall effect to foster a deep sense of uncomfortability, anxiety and fear in the population? After events like these, are people left feeling more unsafe in their homes, hospitals, schools and lives? After all, we have had false flag mass shootings in shopping malls, schools (Columbine), military bases (Washington Naval Yard), airports (LAX), movie theaters (Aurora “Batman” shooting), Government centers (San Bernardino) and now a hospital …

3. Is this another excuse for a school lockdown? Granted, if there were a real crazed shooter on the loose, locking down schools to prevent loss of life would be an appropriate response. However, how many of the widely publicized mass shootings of the last 2 decades have been a real situation of a random crazed shooter acting alone and outside of Government mind control? Any? We know that the New World Order agenda entails State control of reproduction and education (as revealed in these NWO conspiracy documents). Will this event be used to justify more school lockdown in future? Is this part of the normalization of military and police on the streets? Is this part of the normalization of turning schools into prisons?

4. Is it just a coincidence that there are reports of the SDPD being involved with the military in active shooter drills at other Naval Heath clinics such as this one?

Previous Article
Getting the Idea of Government & Political Authority Out of Your Mind
Next Article
The Republic of Australia? Time Overdue for Island Nation to Shed Royals