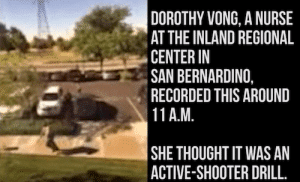 just occurred hours ago in San Bernardino, California, around 11:00am local time on December 2nd, 2015. With all these events, it’s important to question everything right from the start. The odds are that this is yet another false flag operation with the same old purposes of scaring the public, justifying martial law (school and hospital lockdowns) and pushing the gun control agenda. Obama even had time during his busy schedule in Paris at COP 21 to comment on it – as he was trying to convince the world that the Earth is actually warming and that the only way to deal with it is by introducing a Rothschild-Rockefeller worldwide carbon tax and World Court. 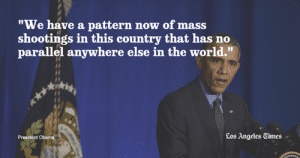 San Bernardino mass shooting: Obama speaks the truth for once. The US does have a pattern of mass shootings. He just didn’t tell you why … (hint: staged false flags ops). Image credit: LA Times

Readers of the independent media will know full well by now the hallmarks and telltale signs of these kind of false flag staged terror events, whether they are bombings, shootings, hijackings or any other kind of attack. Almost without exception – from 9/11 to 7/7 to Sandy Hook and all the rest of them – the script includes drills at the same or nearby time and place, to fool people into initially thinking the operation is an exercise or drill, and to distract both the victims and public from the actual attack.

“VICTORVILLE-(VVNG.com): Victor Valley College officials would like to inform students and area residents that there will be an “active shooter” training exercise on the VVC campus on Monday, November 30th. There will be significant police presence at this time according to Chief Leonard Knight who said this training will last several hours.

Not only that, but there was a SWAT drill occurring at exactly the same time and place:

“The call first came in at 10:59 a.m. of multiple shots fired from the area of 1365 S. Waterman Ave. The Police Department’s SWAT team was training nearby and was suited, ‘ready to roll’ and responded rapidly, Lt. Richard Lawhead said.”

In fact, as Natural News reports, the San Bernardino Inland Regional Center has had active shooter drills carried out every month! This puts a massive hole in the idea that the San Bernardino mass shooting was just a random, unlucky occurrence … 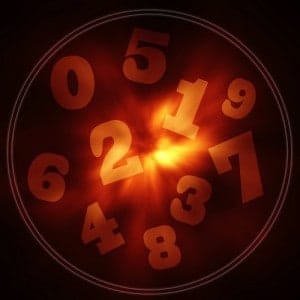 The San Bernardino mass shooting has signs of gematria or occult numerology in the early reports, just as other false flag attacks were also dominated by masonic number codes.

Other False Flag Signs of the San Bernardino Mass Shooting

Here are some other signs this is another scripted event:

– One of the alleged witnesses Dorothy Vong assumed it was a drill, and can even be found calmly narrating the action as armed men in military clothing enter the building she is in;

– So-called witness being interviewed has a masonic cap on his head!;

– Alleged shooters in the San Bernardino mass shooting are referred to as actors (here at 0:16 mark) (this happened in the false flag hoax of Sandy Hook and other events too, and has a double meaning with plausible deniability, because actor can mean a participant or agent in a real event, or someone pretending);

– According to this source (here at 1:20 mark), there were an unprecedented number of governmental vehicles on the scene (many federal), around 400 vehicles, way more than at Sandy Hook, all within 14 minutes of the shooting, which could only happen if there was foreknowledge; 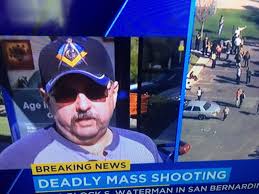 San Bernardino mass shooting: what are the chances a witness would just happen to have a masonic cap?

– Obama has promised that gun control is the #1 issue of his final year in the presidency;

– The public is being introduced to 2 new social engineering buzzwords: fluid and active. The MSM (Mainstream Media) keep repeating the phrases that this San Bernardino mass shooting is a fluid scenario (giving them an excuse to switch the narrative and push early facts down the memory hole). The MSM is also repeating that it is an active situation. What does that mean – is San Bernardino an active shooting or an active drill?

– UPDATE: the alleged shooters in the attack (Syed Farook and Tashfeen Malik) have been killed. Yet more mass shooters that have committed suicide or gotten killed, so they can’t answer any questions …

Finally, given the massive amount of fakery with events like these, we always have to ask the question: is this a false flag event (where real people died) or another false flag hoax (with crisis actors, fake bodies, fake blood and where no one died)? This is a developing story. Watch the early facts carefully, since the official narrative agreed upon in a few days may well contradict the breaking details in areas such as the number of shooters, the types of weapon(s) used, etc.

Previous Article
The Who, How and Why of the JFK Assassination – 52 Years On – Part 3
Next Article
San Bernardino: False Flag or False Flag Hoax?