Rising Above the Perceived Stigma of Anti-Semitism and Holocaust Denial

Rising Above the Perceived Stigma of Anti-Semitism and Holocaust Denial 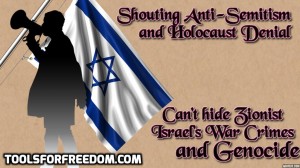 It’s time for honest journalists to rise above any perceived stigma of anti-semitism or holocaust denial and lay bare the horrible truth about Zionism/Israel.

The perceived stigma of anti-semitism and holocaust denial

is what prevents many reporters and journalists, as well as teachers, professors and most of all politicians, from speaking out against the ghastly war crimes of Zionism and Israel. The international Jewish lobby which operates in many countries across the globe – and is especially powerful in the US, UK, France, Germany, Canada and Australia – is a tightly managed and coordinated group which quickly lashes out at anyone who criticizes Israel. Like a ferocious tiger, it is ready to pounce upon anyone who dares to point out the fact that Israel is conducting genocide against Palestine, based on land it fraudulently stole way back in 1948. But enough is enough: it’s time now for real reporters and honest journalists to stand up and rise above any perceived stigma of anti-semitism and holocaust denial – and tell the truth no matter what the names you may get called.

The Stigma of Anti-Semitism is an Absurdity, Because Semite means Middle Eastern Person, Including Arabs

And now we take a break for a quick lesson in etymology. The word “semite” and its derivatives such as “semitism” refer to ancient Middle Eastern people and their culture. These people were incredibly diverse, including Arabs, Akkadians (Assyrians and Babylonians), Ammonites, Amorites, Arameans, Chaldeans, Eblaites, Dilmunites, Edomites, Ethiopian Semites, Hyksos, Nabateans, Maltese, Mandaeans, Mhallami, Moabites, Shebans and Ugarites. They also included Canaanites (including Hebrews/Israelites/Jews and Phoenicians/Carthaginians). So even the term “anti-semitism” itself is a misnomer, since it could be interpreted to mean “anti-Arab” as well as “anti-Jew”, which is the opposite of the intended meaning. People championing the rights of the downtrodden Palestinian Arabs are hardly anti-Arab. It’s quite ironic that the term itself is fraudulent, given Israel’s whole existence is based on fraud.

Anti-Semitism is Used as Fraudulent Weapon

Well, it’s a trick. We always use it. When from Europe someone criticizes Israel, then we bring out the Holocaust. When in this country (USA) when they criticize Israel, they are anti-semitic … it’s very easy to blame people who criticize certain acts of the Israeli Government … that justifies everything we do to the Palestinians.

It’s important to remember in all of this that Zionism and the worship of Israel is not the same thing as Judaism or Jewishness. There are many, many Jews all over the world and in Israel that abhor Israel’s continual massacres against the Palestinians. There are Jewish people marching against the Israeli Government in Tel Aviv. There are Israeli youth who are refusing military service (i.e. killing innocent Arabs) on moral grounds. There are many Jews against Zionism screaming at the top of their lungs that Zionism is disgracing the Jewish name and is actually causing anti-semitism! This must be quite a bother for the owners and rulers of Israel (the Rothschilds), because they can no longer use the stigma of anti-semitism to silence dissenters, when those dissenters are Jews themselves …

The Game is Up: Anti-Semitism is an Obvious Throwaway Line to Deflect Criticism and Attention on Israeli Crimes

There is nothing racist about telling the truth. There is nothing racist about confronting a regime which takes billions of dollars a year from rich countries like the USA and uses it to buy weapons to deploy against poor people, take over their land and force them into homelessness and poverty. The BDS movement of boycotting Israeli investments and goods has gone completely mainstream, and even high-profile figures like Archbishop Desmond Tutu and physicist Stephen Hawking have spoken out against Israeli or cancelled speaking engagements. The stigma of anti-semitism is beginning to lose its sheen and efficacy, because it would hard to convince even the most ardent Zionist or most programmed mainstream media watcher that the BDS movement is somehow racist.

Lastly, for any truly honest researcher, the stigma of anti-semitism is not the only thing to overcome in exposing Zionism; you also have to deal with being called a holocaust denier (read my article on holocaust denial here). This term is another lovely example of misrepresentation, because it implies that those calling for an investigation into the facts surrounding the Holocaust, or suggesting that 6 millions Jews did not die, or suggesting that there were no gas chambers for the purpose of killing Jews, are suggesting that there was no Holocaust at all. This is blatantly untrue. The overwhelming majority of researchers dubbed holocaust deniers are merely trying to maximize and record truth for posterity, and suggesting an alternative version of events based on available evidence.

Why is there such a backlash against so-called Holocaust deniers? It’s not what you think. It’s not because the Rothschild Zionist Israeli leaders really care about the death of the Jews in WW2. It’s because the foundation of modern Zionism is based on exaggeration and fraud, and they are still extracting money from Germany to this day based on reparation to so-called Holocaust victims. It’s a business, it’s a cash cow, and beyond that, playing the victim card 60 years after the event somehow allows the Israeli Government to literally get away with murder to this day.

Besides, let’s be aware that holocaust descendants are publicly condemning Israel for their war crimes. Can’t use the stigma of anti-semitism or holocaust denier against them, can we now, Mr. Netanyahu?

Times are changing. The majority of young Americans don’t support Israel anymore, according to an Iranian-American professor. Public opinion is turning against Israeli, not out of some kind of anti-Jewishness, but out of a desire for moral decency and peace, out of a desire to stop wanton murder and genocide. The stigma of anti-semitism is wearing off. It’s becoming harder and harder for the Israeli leaders to hide with simple name-calling the glaring obvious truth that they are warmongers and war criminals.

Previous Article
People Voluntarily Chipping Themselves: Will the Seduction of Technology Lead to Total Enslavement?
Next Article
Fluoride, Fluoride, Everywhere: Sources of and Remedies for this Ubiquitous Toxin