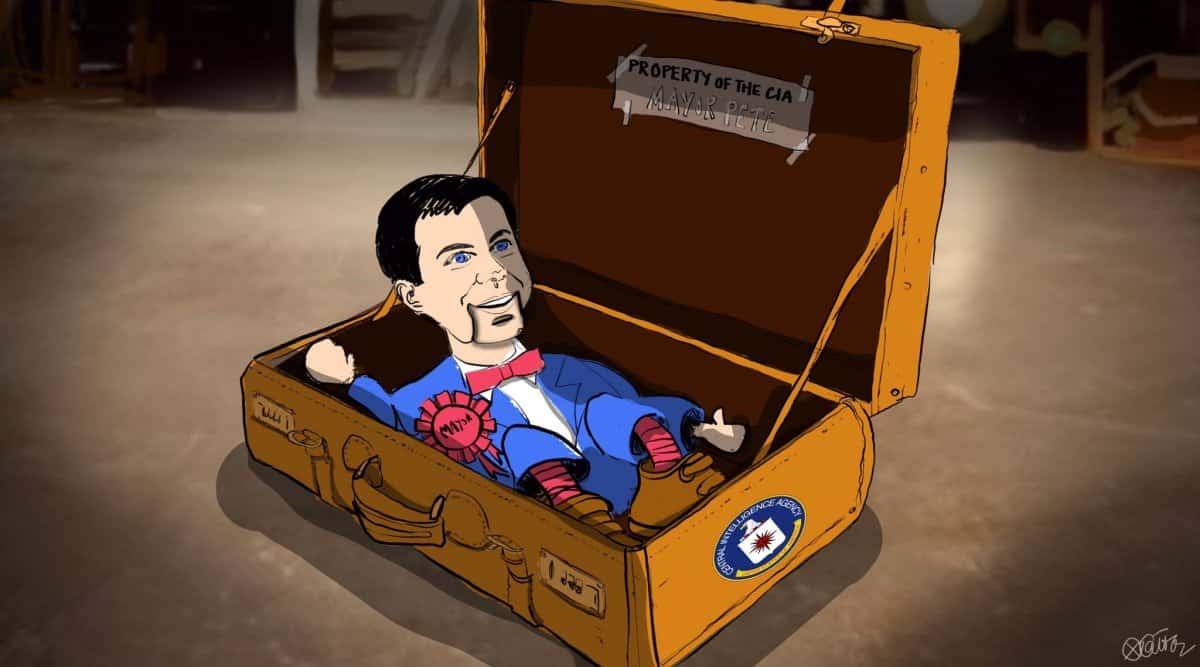 Pete Buttigieg met with boos and chants of “Wall Street Pete” at a recent Democratic Party event in New Hampshire for taking a dig at the revolution-minded rhetoric favored by Bernie Sanders and his supporters. “We cannot risk dividing Americans’ future further, saying that you must either be for a revolution or you must be for the status quo,” Buttigieg said. “Let’s make room for everybody in this movement.”

This is a talking point that the tightly scripted and focus group-tested Buttigieg has been repeatedly regurgitating all month, so it’s worth taking a look at.

Pete is just the latest model in a long line of CIA-funded counterrevolutions pic.twitter.com/PBAbIIzoxP

Anyone who has paid attention to US politics for more than a few years already knows that this is objectively false. From administration to administration, regardless of who sits in the Oval Office or who controls the House or the Senate, the status quo has been adamantly enforced along a rigid trajectory toward ever-increasing military expansionism, exploitative neoliberal economic policies, income and wealth inequality, police militarization, mass-scale imprisonment, Orwellian surveillance programs and increasing restrictions on journalism and free speech.

It is very appropriate that a military intelligence officer with ties to the CIA, who is beloved by intelligence/defense agency insiders and who appears to have been groomed by national security mandarins from the very beginning of his career, should be actively working to kill a revolutionary zeitgeist. After all, backing counter-revolutionaries is a favorite CIA activity.

Progressives already got suckered into forfeiting their revolutionary spirit in exchange for flowery prose and empty rhetoric the last time they elected Pete Buttigieg for president, back when Pete Buttigieg was named Barack Obama. It was literally the exact same script they’re trying to recycle with Puppet Pete: a plucky young underdog with a knack for sparkly verbiage overcomes the frontrunner in Iowa in a stunning upset, then rides the momentum from that initial victory on to the Democratic nomination.

And now we’re seeing the Democratic Party officially award Buttigieg the largest delegate count in Iowa, after a massive scandal and despite countless unresolved discrepancies in the numbers, and establishment narrative managers are now preparing their heartwarming David-and-Goliath stories about the small town mayor knocking out the big bad socialist frontrunner for a second consecutive time in New Hampshire in defiance of the odds and polling expectations. If that falls through they’ve got Nevada, where shit really started to get crazy in 2016, and where they’re preparing to implement a brand new caucus app which they keep trying to say is not an app but a “tool” made for iPads (which is the thing that an app is).

All this to install a man who has managed to pack an astonishing amount of corruption and scandal into a relatively brief, small-scale political career.

As I’ve said many times before, I’m interested in this presidential election not because I am under the delusion that presidential elections tend to change things, but because the attempts to manipulate it, and the public’s response to those manipulations, could shake something loose that actually might. If enough people in the world’s most powerful nation wake up to the fact that they don’t have the kind of political system they were taught about in school, if they realize that everything they’ve been told about how their government operates is a lie, if they realize their lives have been made so unnecessarily difficult by a ruling oligarchic class with a vested interest in keeping them impoverished and distracted, well, then we’re looking at an actual transformative force.

Then we’re looking at the possibility of a real revolution. Not a violent revolution; those always result in a continuation of the same ills under a different system, and there’s nothing revolutionary about that.

I’m talking about a real revolution. One where people begin to open their eyes to the reality that their entire understanding of what’s going on in the world has been the result of mass psychological manipulation throughout their entire lives at the hands of the school system, the billionaire-controlled news media, and the political establishment. One where people open their eyes so wide to the power of narrative control that they become impossible to propagandize. One where people begin weaving their own narratives. Their own understandings of the world. Built not for the benefit of the powerful, but for the benefit of the people.

We’re seeing a lot of movement already in 2020, and it’s just getting started. I see the potential for a lot of light to reach a lot of new areas between the cracks which open up in that movement. And I see the guardians of the status quo having a harder and harder time maintaining the state of stasis. Their increasingly ham-fisted manipulations, such as installing a jarringly phony puppet like Pete Buttigieg, say a lot about their desperation.

Find ways of forcing them to overextend themselves and overplay their hand. Let’s show everyone what they’re hiding behind the puppet theater.

Previous Article
One Percent Dems Have Little in Common with Ordinary Americans
Next Article
Mayor Pete: The CIA’s Choice for President