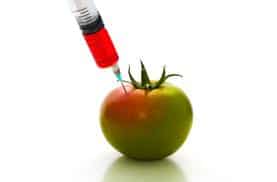 Proposition 37 on the 2012 Californian State Ballot is the issue of whether food with GM ingredients should be labeled. So-called “natural” and “organic” companies are traitorously blocking it.

the issue of whether companies must label the GM (genetically modified) ingredients in their foods or not, is all about the right to know. Consumers have a fundamental right to know what’s in the food and drinks they are considering putting in their bodies. A truly free society operates on the open flow of knowledge and information, allowing its citizens to make informed decisions. Anything that hinders this is suspicious, because it raises the question – what is being hidden?

In the case of GMOs (genetically modified organisms), the massive biotech industry, lead by Monsanto, is forking over millions of dollars to oppose Proposition 37. Why? They are scared that people in possession of the full facts would make an informed decision, i.e. not to eat GM food. After all, there are already numerous studies linking GMOs with infertility, allergies, infant mortality, immune dysfunction, cancer and death. Those mega corporations opposed to GMO labeling know full well that most people would not willingly buy it if they knew the full extent to which it was laced with GM ingredients. So, since their profit is based on secrecy and deception, they are desperate to avoid mandatory GMO labeling.

What is highly disappointing, however, is the host of so-called “natural” and “organic” brands which are siding with the likes of Monsanto, DuPont and other biotech and junk food giants to block GMO labeling. Organic and natural brands such as LaraBar, Knudsen, Silk, Horizon Organic, Santa Cruz Organic, Muir Glen, Cascadian Farm, Gardenburger, Kashi and Naked Juice (all of whom are owned by mega corporations such as Pepsico, Coco-Cola, Kellogg, etc.) have all traitorously paid to oppose mandatory GMO labeling. On the other hand, brands such as Nutiva, Lundberg, Organic Valley, Dr. Bronner’s, Amy’s, Eden and Straus have all donated in favor of Prop 37 to require GMO labeling. If you care about your right to know and getting access to the purest and healthiest food for you body, support Proposition 37 and these true organic companies.