The Power is in Our Hands

The Power is in Our Hands 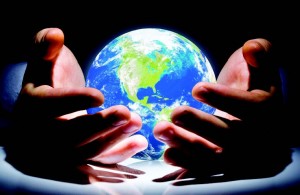 The power is in our hands. We are creators. We are sovereign. We are the masters, and the Government is the servant, created to serve our needs.

The power is in our hands …

but do we realize it? When learning the truth about what’s really going on in the world, it’s possible to feel sad, overwhelmed, depressed and angry. It’s especially understandable to feel powerless in the face of such heartless monoliths like corporations and governments that just seem to do what they please despite the wishes and rights of the people. However, the good news is that the power that these abstract entities seem to have is, in fact, illusory. It doesn’t exist. The power has always been and will always be in our hands, the hands of the people.

We Have the Numbers

Why? There are many reasons, some deeper than others, so let’s start with a simple one. Look at the numbers. How can a few people at the top control billions below, unless the masses let them? The system only remains in place because we blindly go along without questioning anything, and meekly cooperate without challenging authority. Imagine if everyone chose not to go to work for a month. Imagine if everyone chose not to use funny money (fiat currency) and instead chose to barter and trade. Imagine if everyone withdrew their money from the banks at the same time. The whole system would collapse! What appears powerful is really very fragile, and what appears fragile is really very powerful.

What if Government Employees Refused to Carry out the NWO Agenda?

A case in point is the recurring theme of a biological epidemic, such as the swine flu (a few years ago) or MERS (now). If you pay close attention you may realize that this generated epidemic is being used to usher in more of a police state, and the vaccine is being used as a tool for global depopulation. Governments worldwide are planning mandatory vaccinations, but here’s the real issue: how can they have enough manpower to round up everyone and forcibly inject them? It would only work if firstly most people went to their local vaccine center and willingly submitted. Then the Government could focus on the dissidents. But imagine if a huge majority refused from the start. Imagine if this majority was also composed of aware doctors and policemen, the very people the Government is relying on to carry out their plans! If doctors, policemen, soldiers and others remember their oaths, and actually serve rather than enslave the people they swore to protect, there would be too few enforcers and the whole scheme would fall through.

The Fundamental Truth: We Are Creators

It’s easy to see that there’s strength in numbers, but there is a more profound reason why the power is in our hands: we are creators. Every single human being is a dynamic creator god or goddess, regardless of whether he or she realizes it. The reason is that we all think and feel – and thought and emotion are inherently creative. Every time you think, you create! Everything you see around you was once a thought in someone’s mind. Cars, pens, books, computers, robots – all conceived on the level of thought before they were made real on the level of matter. When you have emotion together with thought, there is an added intensity which helps the thought manifest in the material world much more quickly.

The fact that we are all creators is confirmed by the latest science, which suggests that electrons seem to appear when we look at them, but disappear when we don’t. Somehow we are actually calling reality into existence! Atoms are not things, but only tendencies or fields of probability, which we influence and control with our beliefs, expectations and desires. When we look out at the world and see solid objects, it’s important to remember they are really just fields of probability which we can shape with our minds – incredible but true!

This is an uncomfortable truth for some, because once you realize that you are the creator and not the victim, the cause and not the effect, you can’t keep blaming everyone for your problems. You are responsible for the condition of your life, your state of being, and your happiness. It may be easier to pretend you’re a victim who has little or no control over what is happening, but ultimately that is denial, and it’s not going to help you grow as a person.

The flipside is that once you assume responsibility for everything in your life, you begin to wake up to the power you have over it. You start to realize that you’re not just the actor or actress, but are the scriptwriter and director. You are writing and acting out the plot of your own life! And the content of this plot is completely up to you. The reason we don’t always see this is because it is our subconscious that is mainly running the show, not our conscious minds. It’s all a question of consciousness – that’s why all the evil agendas stem from a giant consciousness or frequency battle.

Our Outer Life is a Reflection

We are projectors. We project our inner state outwards, and what we see on the outside is just a reflection. As quantum physics affirms the truth is that there is no world “out there”. The outer world is a mirror, a giant movie screen where we project and construct our world. If you don’t like something in your world, you can change it, but you need to start within by changing the projection. There’s no point trying to alter a form in the mirror or on the screen! We are the cause. The outside world is the effect. If you need to shave, don’t scrape the mirror in front of you! Scrape your face.

If you change the projection, you change the reflection. When you change your projection (your inner state), the forms dancing in the mirror or on the screen (your outer world) will automatically change too. For example, try treating people with love no matter what. Watch how they change. Trying to fix someone else (your outer world) can be very frustrating. Try projecting love (your inner state) onto them instead, and they will automatically respond better. You can create the life you want by deliberately choosing your state of consciousness. When enough of us consciously project optimism right now for the future, the world “out there” on the movie screen changes because enough of us have changed the projection. It’s that simple. The power really is in our hands.

We are creators, like it or not. Most people don’t know this, so their creativity is being siphoned off by the Controllers, who have a definite agenda of control and fear. Most people turn off their brain and critical thinking and let the mainstream media tell them what to think and feel, and so then they collectively create that. This is how the Controllers have tricked us. They’ve seized the forms of mass communication and are using them to program people’s thoughts and feelings (through all the fearful reporting), and thus the outer world.

Do you want to keep being used like a ‘human resource’, a piece of cattle or a battery powering the Matrix, just to further the dark agenda of someone else? If not then it’s time to get off your knees and stand up. Ask yourself: what kind of world do I want? What do I want my children to learn? How would I structure society? What kind of monetary system would be fairest for all? Get clear on who you are, and what you want. Then start creating that. Get together with people, provoke discussions, ask the tough questions and join forces in a common vision. Resisting the current system is not the point. Creating a new system is the point.

Creating an Empowered World Starts with You

The mere act of telling one person something important creates real change. One such act can go thousands deep and start a chain reaction of knowledge spreading like wildfire. You can affect the world in a big way just by informing yourself and others, and consciously choosing what you project and create. These days messages travel far and wide at the speed of light. The question is, who are you? What is your message? What do you stand for? What kind of world are you helping to create? Are you using your creative power, or are you letting someone else use it? Once you are strong and clear about your message, send it out to the world and watch the ripple effects everywhere.

Remember, what’s happening in the world is a timeline, a probability, a crazy train that we’re riding. It’s a train that’s been hijacked by greedy criminals. But we can get off that train anytime we want. We can even change the direction of that train. The current timeline is not set in stone; it’s just showing where we’ll end up if we continue being complacent and unconscious. Shake off your apathy – all it takes is a bit of awareness and determination from you to make a difference, and you’ll help create a future more to your liking.

Let’s create the world we want, where everyone has enough, where everyone has the basic necessities of life, where everyone’s survival is guaranteed. We the people are the creators. Governments and corporations are the created. We made them; we are their masters and they are our servants. They are fragile and dependent on our power to sustain them! Let’s all assume our rightful positions as masters-creators! We are sovereign. The power is in our hands.

Previous Article
The US is Not a Democracy – Surprise, Surprise
Next Article
Get your Case Dismissed with Broad-Spectrum Legal Remedy