Pope – Positioning Himself to Be Head of Planned One World Religion?

Pope – Positioning Himself to Be Head of Planned One World Religion? 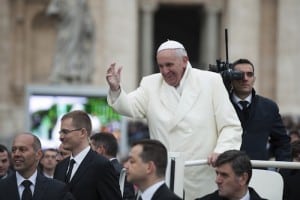 Is the Pope positioning himself to be head of the planned One World Religion (“United Religions”) thus cementing more centralization of power and belief?

Pope Francis of the Catholic Church

recently came out and released an Encyclical “Laudato Si” (although someone leaked it ahead of time and released it for him) focused on tackling the issues of poverty and environmental damage. As noble as this sounds, however, in doing so the Pope fell into the trap set up by the Club of Rome and other elite think tanks of blaming man for global warming. Rather than sticking to a more general message of caring for the Earth and treating the environment responsibly, the Pope’s message was decidedly political. By entering into politics with the Rockefeller-and-CFR-created United Nations at his back, one has to wonder if the Pope is positioning himself – or being positioned – to be the head of the planned One World Religion which has long been planned as an integral part of the structure of the New World Order (NWO).

Pope Francis to be Chief Priest of the One World Religion?

The push to make the Pope the head of the UN One World Religion has been going on awhile. Last year, for instance, former Israeli President (and therefore by definition war criminal) Shimon Peres held public talks with the Pope and expressed his desire for Pope Francis to lead the world into a One World Religion. According to the Jerusalem Post, Peres’ idea is to create a UN-like organization called the “United Religions”. The website cfnews.org also states:

Peres “proposed the founding of a United Religions organization — modeled after the United Nations — to fight terrorism”. In an interview with the Catholic magazine Famiglia Cristiana, Peres said he wanted to establish an international body representing the world’s major religions, as “an unquestionable moral authority” able to intervene in conflicts, “a UN of religions”.

How interesting that the old abstract bogeyman “terrorism” is even being used to push for a One World Religion. The elite must love that one concept of terrorism given how much mileage they seem to extract from it.

The Pope has been reaching out to other Christian sects, as well as to other religions like Islam, in order to find commonality and bridge the gap between faiths. On one level, I applaud this because so much strife, violence and war has been wrought in the name of religion. It really is crazy and insane to judge, condemn and hate others because they have a different idea of “God” than you. However, there’s a deeper agenda going on here. The NWO is all about centralization of power; in this case, centralization of belief. The elite want to dictate exactly what you may or may not believe in the religious and spiritual realm, just as in every other realm, and you can be sure they are using tactics like controlled opposition to control and steer a religion into place which limits your idea your Self, God and everything in the world. I have already exposed how mainstream Christianity is full of limiting ideas and disempowering beliefs, and given the Vatican’s horrendous history of suppression of thought and mass murder (suppression of scientific truth, witch-burning, the Inquisition, etc.) it would be the ideal “carrier” for a disempowering One World Religion.

Who is the God of the Planned One World Religion?

The crucial question in this whole push towards a One World Religion is: what kind of “God” are we being pushed to worship? Is it the God of the Old Testament, Yahweh, who seems to practice and encourage judgment, revenge and punishment? Is it the God of the ancient Romans, Jupiter, who practiced and encouraged promiscuity and power over others? Perhaps it is the ultimate God of Freemasonry, Lucifer, one of the most powerful secret societies that has fueled the NWO ever since its inception. In a very candid 1976 interview, the late Jewish Zionist Wallace Rosenthal (former top Administrative Aide to the then Senator Jacob Javits, who was since defeated in the 1980 election) boasted how elite Jewish power controlled everything in the world from the US to Russia to the UN, and stated:

“Most Jews do not like to admit it, but our god is Lucifer.”

Is the Pope just another “useful idiot” to the agenda by pushing people towards worshipping a Satanic God? Is he aware of statements made by former high-up Vatican officials like Martin Malachi that “anybody who is acquainted with the state of affairs in the Vatican in the last 35 years is well aware that the prince of darkness [i.e. Satan] has had and still has his surrogates in the court of St. Peter in Rome.” Or the former Pope Paul IV who stated that the smoke of Satan had entered the Church? Indeed, is Pope Francis aware of the satanic elements of organized religion including his own brand of Christianity?

In stepping deeply into the political realm and promoting the false idea of a AGW (anthropogenic global warming or manmade global warming), the Pope has thrown his hat (or his occult fish-shaped mitre) into the ring with those promoting Global Governance. This, of course, means a United Nations-led One World Global Government – in other words, the New World Order. Thus, we have another “respected leader” in the world calling for a One World Government, based on the staggeringly absurd idea that carbon dioxide is the mortal enemy of mankind! Can you hear the Rothschilds laughing as their “save the environment” corporate scheme continues to unwind and enlists market segment leaders in specific areas to convert their followers over to the idea of a Rothschild-Rockefeller controlled One World Government? 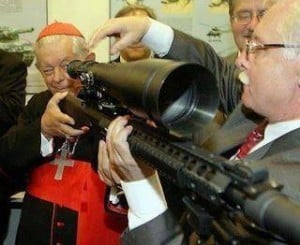 The Vatican invests in guns and arms, but likes to preach against violence.

We don’t need a One World Religion. We need a respect for the individual freedom, rights and beliefs of every single person on the planet. Each person has their own unique spirituality and sovereignty, and ultimately is a religion unto themselves, which includes the freedom to be an atheist and have no interest in religion whatsoever.

Want the latest and greatest news and analysis on Conspiracy, Natural Health, Sovereignty, Consciousness and more? Sign up for free blog updates!

Previous Article
Currency Crisis: How Much Longer Until it Hits the US?
Next Article
Soul-Catching Net: Are We “Recycled” at Death to Remain in the Matrix?