Trump Goes Off Script: Withdraws US from Paris Climate Accord

Trump Goes Off Script: Withdraws US from Paris Climate Accord 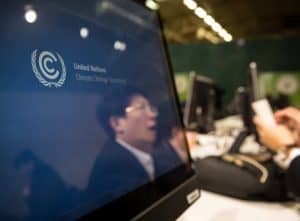 In a blow for NWO plans for a worldwide carbon tax, Trump has gone off script (from a globalist point of view) & withdrawn the US from the Paris Climate Accord.

Trump has withdrawn the US from the Paris Climate Accord

in what can be considered as majorly going off script (from the point of view of the globalists / New World Order conspirators). Of course, for Trump supporters, the president is keeping on script with his campaign promises. This is good albeit somewhat rare, given that in his first 4 months as president, Trump has done some significant flip flopping, reversing his position on many key issues since assuming office. Despite some of the atrocious recent moves by Trump – cutting weapon deals with the terrorist-funding and citizen-beheading fake royal Saudis, as well as sucking up to the Zionists in Israel – credit must be given where credit is due. Trump has seen through the manmade or anthropogenic global warming (AGW) hoax, which is the basis for the worldwide carbon tax agenda, and has followed through on his word to not be a part of the deception any longer. The Paris Climate Accord will now be lacking any real substance without the signature of the most powerful nation in the world, the USA.

AGW is Based on Falsities, Fallacies and Insanities

At this point, it’s important to briefly recall that AGW is not only based on cherry-picked data, cooked books and fake numbers, but also on utterly crazy and false ideas. Proponents of manmade global warming want you to believe that carbon dioxide (CO2) – the molecule of life for all plant life on this planet – is actually an unwanted pollutant. They want to classify the very air you breath out as some sort of toxin that needs to be regulated, despite the very provable fact that higher levels of CO2 mean more abundant growth of plants – a fact well known to greenhouse farmers.

The irony is that the more plant life we have, of course, the better the flowdown effect on the environment – the very thing that AGW supporters claim they are protecting and standing up for.

Yes, humans are polluting the world in horrible ways, but this has nothing to do with carbon dioxide, and everything to do with the synthetic chemicals, petrochemical drugs, crude oil, plastics and other horrible stuff that we are dumping into the world – not to mention the incessant geoengineering programs which spray aluminum, strontium, barium and God knows what else on unsuspecting people below as though they were mere bugs.

You can be sure the Bilderbergers, locked away from the eyes and ears of the world in their plush hotel in Chantilly, Virginia, will be discussing how to get the carbon tax agenda back on track. The carbon tax, for those who don’t know, is the brainchild of the Rothchilds, Rockefellers and other NWO criminals who have been working on the idea since at least the 1980s as a pretext with which to bring in a One World Government.

You can read more about the background to the carbon tax in my earlier article Good Hearts, Fooled Minds: Top 4 Fallacies of the Hijacked Environmental Movement, but basically, the agenda arose out of 2 conspiracy reports/documents from The Iron Mountain and The Club of Rome. The 1966 Report from the Iron Mountain made the case for exaggerating an environmental threat so as to justify world global governance:

“It may be, for instance, that gross pollution of the environment can eventually replace the possibility of mass destruction by nuclear weapons as the principal apparent threat to the survival of the species. Poisoning of the air, and of the principal sources of food and water supply, is already well advanced, and at first glance would seem promising in this respect; it constitutes a threat that can be dealt with only through social organization and political power.”

Meanwhile, The Club of Rome’s 1991 document The First Global Revolution? hatched the plan of justifying a World Government so as to protect humanity from itself:

“In searching for a common enemy against whom we can unite, we came up with the idea that pollution, the threat of global warming, water shortages, famine and the like, would fit the bill. In their totality and their interactions these phenomena do constitute a common threat which must be confronted by everyone together … all these dangers are caused by human intervention in natural processes, and it is only through changed attitudes and behavior that they can be overcome. The real enemy then is humanity itself.”

The Club of Rome is part of a key group of 6 interlocking societies known as the Round Table, which was first led by imperialist Cecil Rhodes. The Round Table includes the Bilderberg Group (widely considered to be at the apex), the CFR (Council on Foreign Relations), the RIIA (Royal Institute of International Affairs), the Club of Rome, the Trilateral Commission and the United Nations.

To reiterate, the carbon tax is the key plank of their NWO manifesto. Without the US involved, there is little chance of it becoming truly global. It is surely not too much to imagine that many key Bilderbergers must be fuming at Trump’s withdrawal and plotting on how to bring him back into line.

Reactions to the Trump Withdrawal from the Paris Climate Accord

Trump’s decision has already met with a lot of disappointment, criticism and condemnation from many politicians, including European leaders and even the mayor of Pittsburgh, Bill Peduto. Trump had said in his speech announcing the withdrawal that he represented the people of Pittsburgh, not Paris. Peduto wrote on his Twitter account: 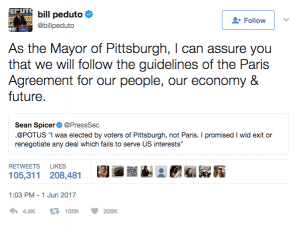 Bill Peduto writes about Trump’s withdrawal from the Paris Climate Accord.

Trump also lost the support of another billionaire – Elon Musk, founder of Tesla – who wrote on Twitter that he is “departing presidential councils”: 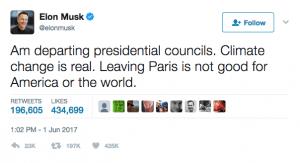 Elon Musk writes about Trump’s withdrawal from the Paris Climate Accord.