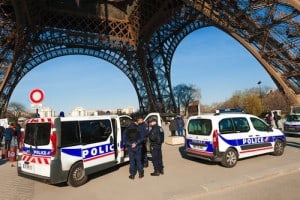 There are at least 5 pieces of evidence of Paris attack foreknowledge … and what solutions were proposed in the aftermath? More war and surveillance, of course, to “stop terror” (which France and their allies helped create)!

With the dust settling, the fact remains that there is evidence of Paris attack foreknowledge.

It’s always important to question everything. It appears that certain people and groups knew in advance that the Paris attack was going to happen (another indication on top on the 10 false flag signs listed here). Major mainstream outlets have referred to the Paris attack as France’s 9/11, which is interesting, since 9/11 was a blatant false flag attack with plenty of evidence of prior foreknowledge. Likewise, there is evidence of Paris attack foreknowledge too, which will cement even further the very high likelihood this was another false flag operation. This article also takes a look at the aftermath and repercussions of the attack – which of course benefit those who planned and orchestrated this horrific event in which over 150 innocent people were killed. 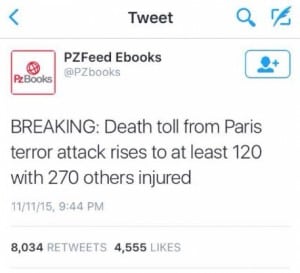 Bot auto Tweet with Paris Attack foreknowledge? If not, this sure is a highly improbable and eerie coincidence …

The first piece of evidence showing Paris attack foreknowledge was an incredible tweet date-stamped 11/11/15 – a full 2 days BEFORE the Paris attack occurred on 11/13/15 or November 13th, 2015 (see image above). According to Twitter, once a tweet is made or posted, it cannot be edited, but only deleted. Various mainstream news outlets have explained this away as a tweet generated by a “bot”, which takes headlines and text, and randomly merges them into new, mashed-up and unreal messages. Some outlets claim the bot took a tweet about the Charlie Hebdo attack earlier this year in 2015 and mashed it with a tweet about a Nigerian mosque attack in 2014, and mixed the two. If this is true, it is an incredibly eerie coincidence, especially when it got the numbers of 120 killed and 270 injured so precise …

However, Twitter was not alone with possible foreknowledge. Wikipedia (second piece of evidence) was in on the act, too, with incredibly detailed descriptions of the attack just 2 hours afterwards. Wikipedia also made a slip-up; in their version at 23:06, they write about an event yet to happen at 23:58! As InspireToChangeWorld reports:

“In a televised statement at approximately 23:58, French President François Hollande declared a state of emergency and closing of borders for the whole of France.[7]”

How could the writer report what President Hollande did at 23:58, as if it’s a fait accompli, when he’s writing at 23:06, before it happened?  Does this not remind us of the BBC reporting the fall of Building 7 with Building 7 still in the background? The fact that it was dropped from the change record also makes the article difficult for the researcher to retrieve. Was it dropped to cover their tracks? I find this circumstance to be so implausible as to establish the lack of credibility of the Wikipedia article.

I furthermore cite this as evidence that the event was pre-planned.”

Another general point to consider in the immediate aftermath of the attack is this: how did all these places around the world (such as the Sydney Opera House) get a coordinated show of blue, white and red colors (the French flag colors) ready so quickly just after the attacks, so they could participate in all the “solidarity”?

The third piece of foreknowledge is that fact the Bataclan Theater (one of the main scenes of the Paris attack) was sold by its Jewish owners just 2 weeks before the attacks. The theater may now be turned into a memorial of some type, but either way, it seems very likely an attack like this would destroy business. Given all the connections between Israel and ISIS (which stands for Israeli Secret Intelligence Service), is this just another astounding coincidence or further proof of foreknowledge?

Here is a fourth piece of general foreknowledge in the Paris attacks. As revealed by the Times of Israel itself, the Jewish community was getting prepared in the months before the bombing for some kind of terror attack:

“For months, security officials in France’s Jewish community have been warned of the very real possibility of an impending large terrorist attack in the country, although there had been no specific information, according to Jonathan-Simon Sellem, a freelance journalist and a representative of French citizens in Israel.”

The fifth piece of evidence is the CIA-sponsored meeting between intelligence heads of the 4 powerful countries running the Anglo-American-Zionist New World Order: the US, Britain, Israel and France. As you can see in this video, at the meeting were John Brennan (CIA chief), John Sawers (former MI6 chief), Bernard Bajolet (French Directorate for External Security chief) and Yaacov Amidror (former Israeli National Security Advisor). As Melissa Dykes comments, funny how these “intelligent” bigwigs can never seem to stop any terror attacks – maybe because they are too busy planning them.

[UPDATE: there is now a sixth piece of Paris attack foreknowledge. According to the New York Times, “The Turkish authorities warned their French counterparts twice in the past year about one of the attackers, Ismaël Omar Mostefaï, a 29-year-old French citizen who was known by the authorities as someone who had radical Islamist beliefs.” 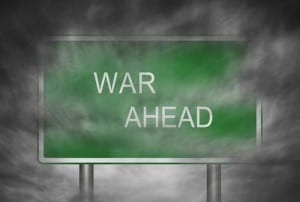 There is strong evidence of Paris attack foreknowledge, but will the aftermath lead to more violence – and war – in Syria and the Middle East?

So what “solutions” do President Hollande and France roll out in the wake of this false flag Paris attack? Why, more centralized control, surveillance and war, of course. How else can you stop terror? Or, more accurately, how else do you stop the terror you helped to create? Consider the following:

– Hollande declared a state of emergency, France’s national borders shut and a mandatory curfew in Paris for the first time since 1944 (according to the Associated Press); he deployed the French Army on streets of Paris to enter any home, business or building without needing the consent of its owners; he urged French lawmakers to extend the state of emergency to 3 months; to pass new laws that would allow authorities to strip the citizenship from French-born terrorists and make it easier to deport suspected terrorists; and called in general for changes to France’s constitution to equip the state with new crisis powers;

– France is invoking the EU Lisbon Treaty’s “Article 42.7”. This is a collective defense article requesting military help from its European partners in response to the terror attacks in Paris. EU officials say the mutual defense article is being used for the first time;

– US politicians are similarly calling for NATO to invoke “Article 5”. Article 4 calls for members to “consult together whenever, in the opinion of any of them, the territorial integrity, political independence, or security of any” is threatened. Article 5 considers an armed attack against one or more members as an attack against all of them.

Domestically, remember that France already passed a draconian surveillance law in May 2015 which mirrors the what the NSA and GCHQ are doing to the American and British people respectively:

“allows the government to monitor phone calls and emails of people suspected of connections to terrorism without the authorization of a judge … requires Internet service providers to install “black boxes” that are designed to vacuum up and analyze metadata on the Web-browsing and general Internet use habits of millions of people … and to make that data available to intelligence agencies … allows government agents to break into the homes of suspected terrorists for the purpose of planting microphone bugs and surveillance cameras and installing keyloggers on their computers … in exceptional cases, the law allows the government to deploy what are called “ISMI catchers” to track all mobile phone communications in a given area.”

Internationally, the geopolitical ramifications of this Paris attack may be massive. We may be witnessing the early days of the call to war – the call to World War 3, nothing less – based on the assertion that the group which orchestrated these Paris attacks is ISIS (not even its own country). How many people are going to fall for this, when declassified DIA documents show the US created and founded ISIS, and that France gave weapons to rebels that later joined/became ISIS?

Previous Article
Paris Shooting: 10 Ways It Looks Like a Hallmark False Flag Op
Next Article
The Who, How and Why of the JFK Assassination – 52 Years On – Part 1