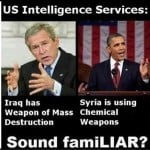 The Obama Syria 2013 story is the same as the Bush Iraq 2003 story: same unfounded claims and pretext for the Western NWO to attack a sovereign nation.

Do you see any substantial difference? Bush and US administration, with the support of Blair and his British administration, went around the whole world telling us that Saddam had WMDs (Weapons of Mass Destruction). That turned out to be a massive whopper. It was a bold-faced lie used as a cover story to launch an attack on Iraq. As General Wesley Clark had previously admitted to the media, the plan to attack Iraq was hatched much earlier, as part of a overall US scheme to control the Middle East (see his admission here). The Obama Syria 2013 story, like the Obama Libya 2011 story, is following the same script: invent an excuse to attack a sovereign nation (that has geopolitical significance to the Anglo-American New World Order and is currently without a Rothschild bank) by claiming the legitimately elected government are killing their own people.

The clinical psychopaths running this world must be stopped and held accountable, and it is heartening to see the world as a whole become more politically awakened and refuse to buy into the mendacity spewing forth from the mouths of Obama, Kerry, Cameron and their ilk. Without any proof whatsoever, US Secretary of State Kerry accused Assad of using chemical weapons against his people. This, despite the fact that:

Given the history of false flag attacks carried out by the US and it allies, I strongly suspect they are feeding them with chemical weapons and making it look like Assad was responsible.

Thankfully, sanity has prevailed in the UK, where Cameron’s desire to go to war with Syria was shot down and defeated. It is unclear whether Congress will do the same to Obama, or whether he will even go to Congress to ask; he has already shown his disregard for both national US law and international law in his pre-emptive strikes. The Rothschild-run Western powers are incredibly arrogant in thinking that Syria could just be like another Iraq or Libya. Iran, China and Russia (all of whom have strong, advanced militaries) have all declared they are not going to stand back and just let the US and allies invade. If Obama does decide to launch a war there, we could very possibly be looking at WW3. Let’s hope the peace-loving people of America and Britain can keep their psychopathic leaders in check enough to prevent the “Obama Syria 2013” war plan from becoming a brutal reality.