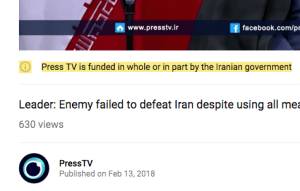 New YouTube warnings warn you’re about to watch info / news funded by a foreign government. Is this an attempt to soft censor alternative views online?

recently – but only on some channels, and mostly those which challenge the official narrative. Google (founded by Zionists Sergey Brin and Larry Page), now run by Zionist Eric Schmidt, owns YouTube (run by Zionist Susan Wojcicki). YouTube claims its goal is to “equip users with additional information to help them better understand the sources of news content that they choose to watch on YouTube,” according to Geoff Samek, senior product manager of YouTube News. However, is this the real point? Or is the idea to cast doubt in the viewer’s mind? To get the viewer to think: “Is this information real? Can I trust it? Is it more fake news?” When you watch a video now on YouTube from a media outlet that is not sanctioned by, and in line with, the Anglo-American-Zionist official perspective of the world, you may see one of these new YouTube warnings right beneath the video where the title used to be. The title has actually been pushed further down the page…

New YouTube Warnings on RT, PressTV and Other Alternative Channels

The new YouTube warnings were rolled out on Feb. 2nd 2018. When you go to the YT channel of Iran’s PressTV, you will see this:

The warnings were being displayed on RT (Russia Today), however as of today they are not appearing. Has YouTube backed down? Just yesterday it used to say:

Some alternative, non-Western media outlets claim they have editorial independence. Is YouTube going to evaluate that claim? Funnily enough (or not), there are few such warnings for the American MSM. PBS (Public Broadcasting Service) gets this new YouTube warning:

Large media outlets of Britain and Canada got the new YouTube warnings also:

But what about other major channels?

However for the YouTube channels of CNN, NBC, MSNBC, ABC, Fox and others, there is no warning. Yet these media outlets, and many others around the world, have been infiltrated many decades ago. They are wholly owned by the CIA, ostensibly an arm of the American government, although in many ways above it. Operation Mockingbird was a CIA project to penetrate and covertly control the media. It began in the 1950s under then CIA director Allen Dulles, the very same one who had a key role in the hit on JFK.

Declassified files show how the CIA totally infiltrated the US MSM. It bought up journalists, reporters and newsmen, and once they were on the CIA payroll, it persuaded them to write CIA-sanctioned pieces, which were then inserted into TV, newspapers and journals everywhere as “news” when they were nothing more than lies and propaganda. Richard Salant, former President of CBS News, once said that “our job is to give people not what they want, but what we decide they ought to have.”

Former CIA Director William Colby confessed that “The Central Intelligence Agency owns anyone of any significance in the major media.”

Mockingbird was famously exposed in the 1975 Church Committee hearings (see an video excerpt here). Nothing much has changed today. Journalists worldwide are still on the payroll, and some were brave enough to talk about it, such as the late German reporter Udo Ulfkotte, who admitted he was being essentially forced to write anti-Russian pieces to better fit the New World Order narrative.

So why doesn’t YouTube give some warnings under the channels of the MSM, such as:

“CNN is funded in whole or in part by the CIA”

“NBC is funded in whole or in part by the CIA”

“MSNBC is funded in whole or in part by the CIA”

“ABC is funded in whole or in part by the CIA”

“Fox is funded in whole or in part by the CIA”

Don’t hold your breath waiting – you will suffocate. 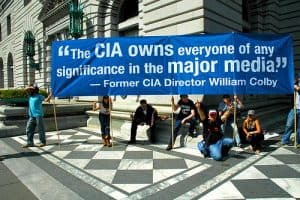 Do you really think that the Alphabet-Google-YouTube behemoth want their viewers to be genuinely informed? That they care so much about you and just want to make sure you are getting unbiased news? Or is it more likely the new YouTube warnings are a thinly disguised effort by the technocracy to keep the internet free of alternative views by dissuading viewers from watching certain channels? Smells like more soft censorship. Let us know your thoughts in the comments below.

Previous Article
David Icke’s “Everything You Need To Know But Have Never Been Told”: A Book Review
Next Article
Cancer: Busting the Myths – Part 1 (The Mysterious Cancer Microbe)