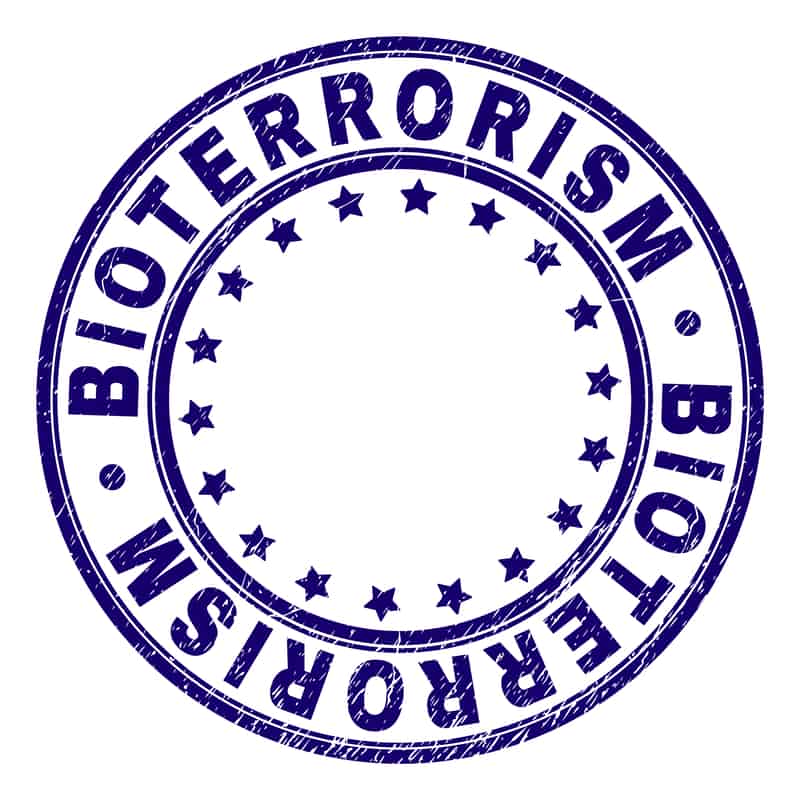 We had the War on Terror. Are we entering a new War on Bioterror? Is everyone a suspected or asymptomatic carrier and thus able to stripped of their rights?

Although officials are not using this exact term, we are now in a War on Bioterror

as government after government has declared war on the new coronavirus strain COVID-19. These are truly life-changing times through which we are living. US President Trump just declared a war on the “Chinese virus” as he calls it. He also claimed he was now a “war-time president” as he invoked the Defense Production Act, an old Cold War law which allows the Executive Branch to control and redirect the production and distribution of scarce materials deemed “essential to the national defense.” In an executive order dated March 18th, 2020, Trump specifically cites personal protective equipment (presumably face masks) and ventilators as meeting the criteria in this provision. The entire planet is going into worldwide lockdown. Just as the 9/11 false flag operation yielded the War on Terror, will the coronavirus operation yield the new War on Bioterror?

The political landscape in Western nations like the US and UK was changed forever by 9/11. Suddenly, terrorism was a “thing” that could be invoked to justify just about any kind of government power or overreach, regardless of its legality, constitutionality or morality. The USG spouted propaganda messages at its citizens that “We’re fighting the bad guys” and “You’re either with us or against us” to get people into line. Labeling foreigners as suspected terrorists allowed the USG to perpetrate all sorts of abuse and torture against whomever they wanted. If you were a labeled a “terrorist” whether proven or not you had no rights. Years later, the concept of terrorism was broadened to domestic terrorism and extremism so that ordinary citizens could be framed as domestic terrorists and extremists – thus made into enemies and stripped of their rights.

It appears the same thing is happening all over again, although this time the new invisible enemy is bioterror. In the old war on terror, the government had to try to frame you as a terrorist or extremist for your actions or views. Now, in the new war on bioterror, everyone is a potential suspect. Since viruses are so microscopically tiny, there’s no way to know if anyone is a carrier or not without being tested (and even then, the PCR test has some serious flaws). People not showing of signs of sickness could still be asymptomatic carriers. Do you see where this is going? What is to stop the government from making you a (public health) enemy and stripping your rights based on the assertion that you are a carrier? The psychological operation in play here is that they want you to submit to quarantine, accept less freedom and roll up your arm sleeve to get a mandatory vaccination with embedded Bill Gates digital ID2020 chips – all to play your part in the new war on bioterror.

China, Israel, South Korea and More: All Your Geolocation Data Can and Will Be Used to Monitor You

As usual, China is leading the way into a new world of technocratic totalitarianism by using the geolocation data (captured from its citizens’ phones) to track and monitor people. Newsweek reports:

“The most recent example that turned heads was Alipay Health Code—an app built by a sister company of tech giant Alibaba that assigns citizens a color code to automatically decide if they are free to move around a city, or face quarantine. It was analyzed by The New York Times, which reported it appeared to share user information with the police.

In another recent case, a mobile application was being pushed out to citizens that reportedly contained a “close contact detector” showing a map of COVID-19 infections.

The Global Times reported this week that authorities in Chengdu city, Sichuan Province, had started wearing “smart helmets” which had the ability to measure the temperatures of passengers-by when they enter a five-meter range. An alarm would ring out if a fever was detected.”

The color-coding app is a scary but predictable technological development from the country that introduced its now-famous social credit system known as Sesame Credit. Meanwhile, in another nation that is in its own way the headquarters of the New World Order, Israel has also announced it will be using cellphone geolocation data to help combat the coronavirus. Israel’s internal security agency Shin Bet will be allowed to use the data to retrace people’s movements who test positive for COVID-19 and identify others for quarantine. In South Korea, the government is using a GPS-enabled app to monitor citizens who are quarantined, and again from the Newsweek article “according to CNN, an alarm will ring out if the infected user leaves their “designated location.”” The government there is actually sending out texts detailing the movements of infected people which is predictably encouraging people to squeal and turn on each other, and encouraging social shaming. And yes, the USG is in talks with Big Tech (who happily censors just about everyone who isn’t an official) to see how they can start using geolocation data.

What are Authorities Secretly Doing During the Lockdown?

So, the fear of the virus is allowing all sorts of agendas to be pushed forward, as I covered in previous articles such as 5+ NWO Agendas Accompanying the Coronavirus Epidemic and Creating and Exploiting the Coronavirus Crisis. Since this phenomenon is rapidly changing, there is now a new element to consider – the worldwide lockdown. The question is: what are the authorities doing during curfew hours? Some have suggested that they are using this crisis as an opportunity to install 5G infrastructure throughout public spaces (here is a brief background to the weaponized technology that is 5G, plus the coronavirus-5G connection). This school teacher-turned-whistleblower claims for a fact that schools in her district are using the school shutdowns to install 5G in the classrooms!

Entering the New Fake Crisis: The War on Bioterror

When the USG declares war on something, it never goes well. The war on cancer didn’t stop cancer and the war on drugs just put more people (many of whom were either non-violent criminals or needed mental health help) behind bars. The USG may not use the exact phrase “war on bioterror” but it appears as if we have now stepped into a new world. Just like the Patriot Act was prepared well in advance and hurriedly rushed into law, is there a new bioterror act (which has secretly been prepared far in advance) about to sprung upon us with draconian new regulations? Is the mass population both in the West and around the world going to be taken in by the hype, fear and panic to allow governments to trample upon their rights? Will you fall for it when authorities argue that every single person is potentially a suspect (i.e. a suspected carrier)?

Previous Article
“China Will Catch a Cold”: Predictions of Virus Outbreak Years in Advance
Next Article
The Lesson of COVID-19