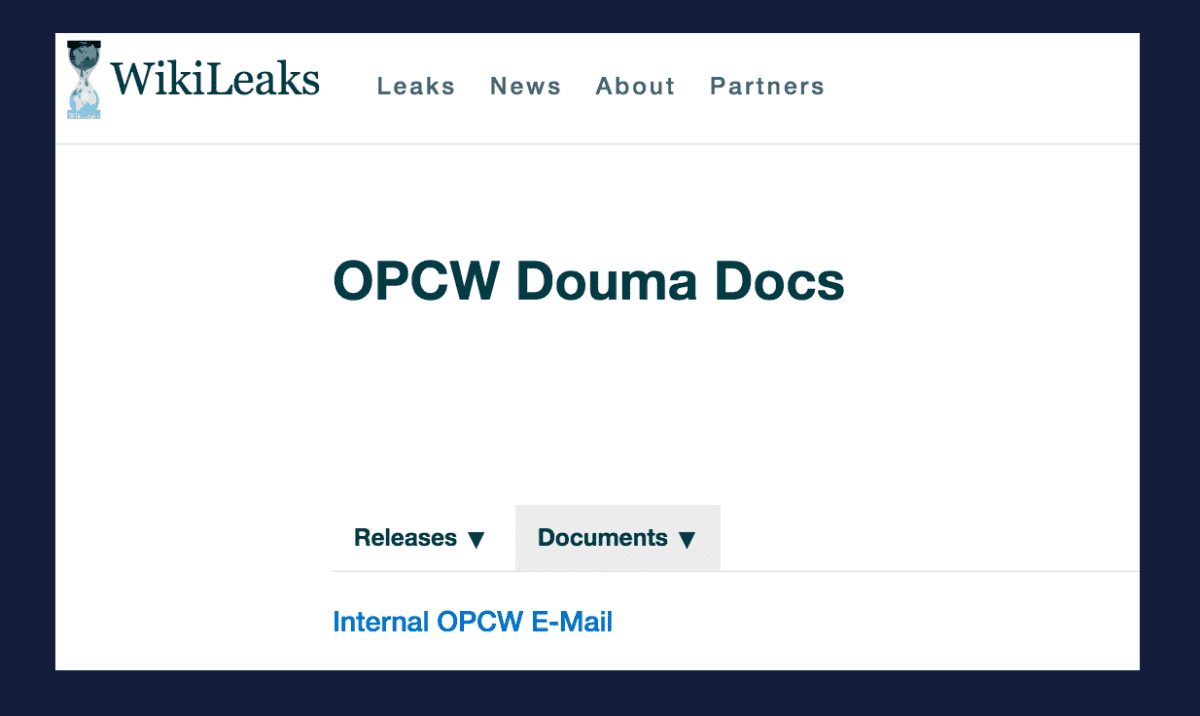 The new OPCW leak (published by Wikileaks) shows the establishment narrative on Syria as a giant lie. The US attacked Syria on false pretenses again.

The new OPCW leak shows yet again how war is based on lies.

On the 6th of July last year, the Organisation for the Prohibition of Chemical Weapons (OPCW) released its interim report on its findings regarding an alleged poison gas attack in Douma, Syria in April 2018. The incident, which resulted in dozens of civilian casualties, was blamed on the Syrian government by the US, UK and France, who launched retaliatory airstrikes on multiple targets in that nation. The interim report claimed that “various chlorinated organic chemicals were found” in different locations on the scene, but strangely said nothing about the levels at which those chemicals were found. The Moon of Alabama blog highlighted this suspicious exclusion on the day the report came out, noting that levels are absolutely essential in determining chemical weapons use when you’re talking about compounds which are found virtually everywhere at some level in any industrialized region.

“The preliminary OPCW report says nothing about the concentrations in which these substances were found,” MoA observed. “Without knowing the concentrations, which may be extremely low, one can not come to further conclusion.”

A new addition to the body of leaks which have been hemorrhaging from the OPCW shows that such skepticism was indeed entirely warranted. A leaked email sent shortly before the interim report was published reveals that the chlorinated organic chemicals which OPCW investigators found on the scene were as low as one or two parts-per-billion, meaning, just as Moon of Alabama speculated last year, that they were found at trace quantities you’d expect to find in any industrialized area.

RELEASE: Secret internal e-mail from OPCW whistleblower, a member of the fact-finding mission sent to Douma, Syria, after the alleged chemical attack in April last year, accusing OPCW management of doctoring report on the incident and distorting facts. https://t.co/ndK4sRikNk

The leaked email, which has been published by WikiLeaks and several other outlets, was sent by an unnamed OPCW investigator to the OPCW’s then-cabinet chief Bob Fairweather, outright accusing OPCW leadership of misleading the public with the information it was omitting from the report it was drafting. Those who’ve been following this scandal closely may remember Fairweather as the man who journalist Jonathan Steele recently reported was responsible for calling investigators into his office to be intimidated by unknown officials from the United States government.

The email was sent to Fairweather on June 22nd, laden with pointed words and phrases like “misrepresents the facts”, “selectively omitting”, “highly misleading”, “disingenuous”, “inaccurate”, and “a major deviation from the original report.” Less than two weeks later, on July the fourth, the investigators were reportedly called into Fairweather’s office for a disturbing meeting with US officials which deeply rattled them.

“On July 4 there was another intervention,” Steele’s report reads. “Fairweather, the chef de cabinet, invited several members of the drafting team to his office. There they found three US officials who were cursorily introduced without making clear which US agencies they represented. The Americans told them emphatically that the Syrian regime had conducted a gas attack, and that the two cylinders found on the roof and upper floor of the building contained 170 kilograms of chlorine. The inspectors left Fairweather’s office, feeling that the invitation to the Americans to address them was unacceptable pressure and a violation of the OPCW’s declared principles of independence and impartiality.”

It’s worth noting at this time that the US government already has a known and established history of leveraging the ostensibly neutral and international OPCW to conform to its preexisting military agendas.

Fairweather’s intimidation ploy appears to have been a response to comments made in the email, and probably other similar internal objections made by other investigators at that time. The email reads as follows (transcript and parenthetical annotations made by Daily Mail):

I wish to express, as a member of the FFM (Fact Finding Mission) team that conducted the investigation into the alleged chemical attack in Douma on 7 April, my gravest concern at the redacted version of the FFM report, which I understand was at the behest of the ODG. (Office of the Director General). After reading this modified report, which incidentally no other team member who deployed into Douma has had the opportunity to do, I was struck by how much it misrepresents the facts. Many of the facts and observations outlined in the full version are inextricably interconnected and, by selectively omitting certain ones, an unintended bias has been introduced into the report, undermining its credibility. In other cases, some crucial facts that have remained in the redacted version have morphed into something quite different to what was initially drafted. If I may, I will outline some specific aspects to the redacted report that are particularly worrisome.

The statement in paragraph 8.3 of the final conclusions ‘The team has sufficient evidence at this time to determine that chlorine, or another reactive chlorine-containing chemical, was likely released from cylinders’, is highly misleading and not supported by the facts. The only evidence available at this moment is that some samples collected at Locations 2 and 4 were in contact with one or more chemicals that contain a reactive chlorine atom. Such chemicals could include molecular chlorine, phosgene, cyanogen chloride, hydrochloric acid, hydrogen chloride or sodium hypochlorite (the major ingredient of household chlorine-based bleach). Purposely singling out chlorine gas as one of the possibilities is disingenuous. It is also worth noting that the term ‘reactive chlorine-containing chemical’ used in the redacted report is, in fact, inaccurate. It actually describes a reactive chemical that contains chlorine which itself (the chlorine) is not necessarily reactive e.g. chlorophenol. The original report uses the more accurate term ‘a chemical containing reactive chlorine’.

The redacted report states that the gas was likely released from the cylinders (in Locations 2 and 4). The original report purposely emphasised the fact that, although the cylinders might have been the source of the suspected chemical release, there was insufficient evidence to affirm this. It is possible the error was simply a typo. This is a major deviation from the original report.

Paragraph 8.2 states that ‘based on the high levels of various chlorinated organic derivatives, […] detected in environmental samples’. Describing the levels as ‘high’ likely overstates the extent of levels of chlorinated organic derivatives detected. They were, in most cases, present only in parts per billion range, as low as 1-2 ppb, which is essentially trace quantities.

The original report discusses in detail the inconsistency between the victims’ symptoms, as reported by witnesses and seen in video recordings. Omitting this section of the report (including the Epidemiology which has been removed in its entirety) has a serious negative impact on the report as this section is inextricably linked to the chemical agent identified. It either supports or detracts from the confidence in the identity of any possible chemical. In this case the confidence in the identity of chlorine or any choking agent is drawn into question precisely because of the inconsistency with the reported and observed symptoms. The inconsistency was not only noted by the FFM team but strongly noted by three toxicologists with expertise in exposure to CW (Chemical Weapons) agents.

A feature of this investigation and report was the robust and extensive scientific basis for sampling plans and analysing the data collected. A comprehensive bibliography of peer-reviewed scientific literature was attached to support and enhance the credibility of the work of the mission. This has unfortunately been omitted from the redacted report.

By singling out chlorine above other equally plausible substances containing reactive chlorine and presenting it as a fact in isolation creates, I believe, a level of partiality that would negatively impact on the perceived credibility of the report, and by extension that of the Organisation. I am requesting that the fact-finding report be released in its entirety as I fear that this redacted version no longer reflects the work of the team. The original report contains facts and observations that are all equally valid. The fact that inconsistencies are highlighted or observations not fully understood does not justify their omission. The inconsistencies and observations are based on the evidence and data collected. Further information in the future may help resolve them but the facts as they stand at present will not alter and need to be reported.

If the redacted version is to be released, I respectfully request to attach my differing observations, in accordance with the spirit of paragraph 62 of part II of the Verification Annex of the CWC.

Today’s @OPCW final report on 7 April 2018 attack in Douma confirms chemical weapons used, demonstrating the vital importance of @OPCW’s work. This confirmed chlorine attack was only the latest example of Asad regime’s CW attacks on its own population. https://t.co/cXXJTCiZI7

The OPCW’s final report published March of this year continued the pattern of crucial omissions even more egregiously than the interim report.

“Regarding the alleged use of toxic chemicals as a weapon in Douma, the evaluation and analysis of all the above-referenced information gathered by the FFM provide reasonable grounds that the use of a toxic chemical as a weapon has taken place on 7 April 2018,” the final report claims. “This toxic chemical contained reactive chlorine. The toxic chemical was likely molecular chlorine.”

Again, the information complained about in the leaked email remained omitted.

This is really important. Why aren’t we talking about it?

“We may have just discovered a major piece of the puzzle explaining how seemingly independent international organizations help deceive us into consenting to wars and regime change interventionism around the world.” https://t.co/yH8mfU9eBC

Another Syria Strike Based on Lies …

The unfolding scandal about the US and its allies once again deceiving the world about yet another military intervention in yet another Middle Eastern nation is a major story, and hardly anyone’s been on top of it.

Back when I published an article about the first OPCW whistleblower this past May it was shared by actress Susan Sarandon on Twitter, who captioned it with the question, “This is really important. Why aren’t we talking about it?” Click on the tweet and read through the comments if you want to see the platoon of blue-checkmarked narrative managers who converged on her post telling her I’m a crazed conspiracy theorist who mustn’t be listened to. I got this story right, and everyone who’s been ignoring it or dismissing it has made an ass of themselves.

We were right, they were wrong. Maybe going forward people should listen to us a bit more and listen to them a bit less.