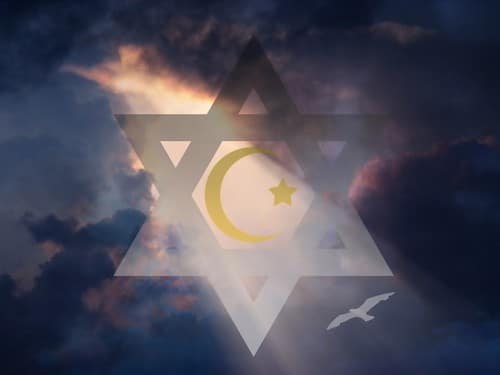 We don’t have to be enemies and hate each other just because we’re told to or born into something. Many aware Muslims and Jews who unite across artificial categorizations realize this.

Unite. Sometimes the solution to all the world’s problems

can be so simple. From the moment we are born into this world of form and matter, we are shown and taught a whole range of pigeon holes, classes, groups and distinctions. We are usually told which group we are and which one we must fit into. We are told that we can only be in one group, not another, because they are opposites or mutually exclusive. For example, we are told that we can be Christian, Jewish, Buddhist or Muslim, but that it’s impossible to be all at once. We can liberal or conservative, but not both at the same time. Sometimes we get so inundated with all these divisions and subsections that we totally forget that all of these things are artificial categorizations. At the heart of the matter is the fact that we are all human, we are all made of the same basic stuff (the same energetic consciousness as well as the same material elements) and that we all have the same basic needs for happiness and fulfillment. Yet, judging by the fact that we so often fail to unite, we lose track of this fundamental commonality all too easily.

In my last article on NWO social engineering, I talked about the constant fragmentation, segmentation and polarization that our misleaders propagate, in order to divide and conquer: “You’re either with us, or you’re with the terrorists”. Behind all of this is fear. You can make it complicated, but really it’s a simple equation: love unites, fear separates. Now, it’s easy to say “unite“, but it’s much harder to do in practice, especially when you feel aversion, judgment, irritation and even hatred towards others. That’s why it’s heartening to see the many following examples the Muslim-Jewish arena of people who have woken up to these imposed categorizations and are actively challenging them, realizing that love transcends all boundaries. 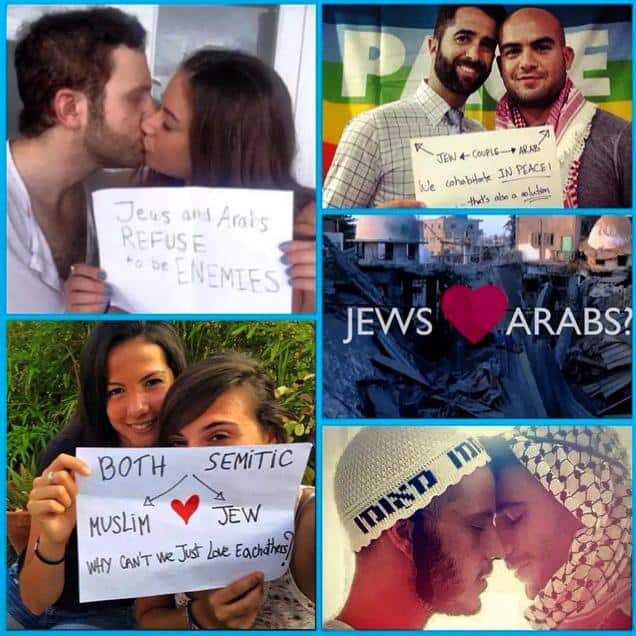 The Arab-Israeli conflict has been ongoing ever since the end of World War 2, and thus has been become deeply ingrained in the psyche of Muslims and Jews. It is therefore incredibly refreshing to see people on either side of it treating it as an artificial categorization. In these video clips (this one embedded above, and here), a Muslim man and a Jewish man conduct a social experiment in New York. All they do is walk down the street in New York, first in a Jewish neighborhood, next in a Muslim neighborhood, then in a neutral neighborhood. That’s it – just walking side by side. Orwell wrote that telling the truth in a time of universal deceit is revolutionary. So too is the mere act of walking, apparently. In the second video list above, the two guys are told by someone that he’s “getting calls” because people are concerned!

The reactions are a very interesting look at human psychology, and also show how some people get it, while others are deeply conditioned and lost in the world of artificial categorization. One man comments, “there is one God”, meaning all religion points to the same thing, which echoes a well-known bumper sticker: “God is too big to fit into one religion”. At the other end of the spectrum, other men merely notice the Muslim man and immediately call him a terrorist before even talking to him! Overall the reaction is positive, with some Jews affectionately calling the Muslim man a “cousin” and vice versa. Interestingly, Israeli whistleblower Miko Peled (a Jewish man who awoke from the Zionist propaganda he was fed) has said exactly the same thing in his presentations: that Jews and Arabs are so genetically, ethnically, linguistically and culturally related that they are essentially cousins, and need to live together in peace like family. Can you imagine the look on Netanyahu’s face if someone were to tell him that!?

There are other wonderful examples of Jews and Muslims coming together to unite. Recently New York Jews and Muslims came together at a Ramadan break-the-fast event. Last year an Israeli hummus restaurant (owned by Israeli Jew Kobi Tzafrir) decided to give a 50% discount to Palestinians and Israelis who chose to sit next to each other and share a meal together! It’s all based on focusing on our commonality (sharing a meal together, coming together to meet a basic primal need of eating) rather than our differences. Kobe wrote in his ad:

“If you eat a good hummus, you will feel love from the person who made it … you don’t want to stab him.” 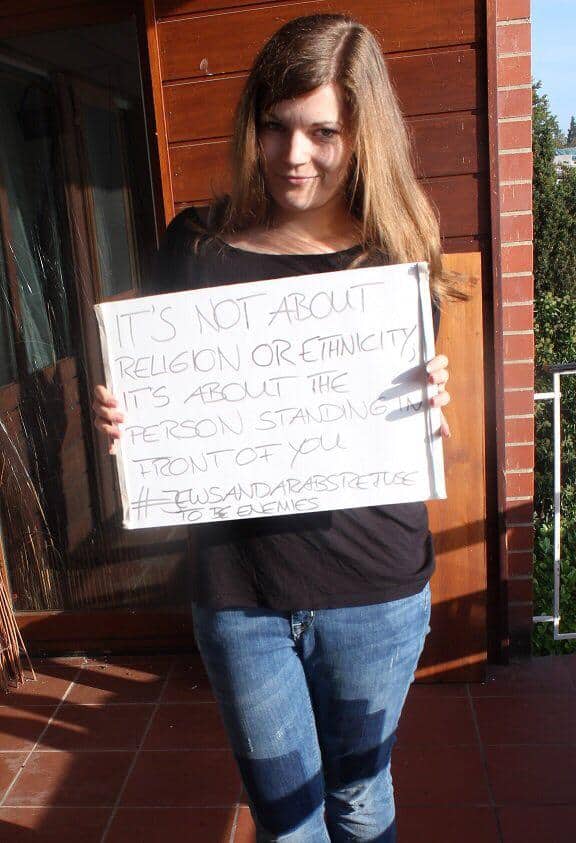 To unite, we have to look beyond color, gender, age, race, religion, sexual orientation and all other artificial categorizations. Treat each situation on its own merits and each person as a unique individual.

People crossing the barrier of race, culture and artificial categorization really is an old theme. You can find many times it in literature, e.g. Shakespeare’s Romeo and Juliet, and Mark Twain’s Adventures of Huckleberry Finn. In both cases, a young daughter of one family runs off with a young son of another family, despite the fact that the two families have been warring so long no one even remembers how it started. There are many modern day examples of Palestinian Arabs and Israeli Jews who refuse to hate and fall in love. Did you know about Haifa, the “Israeli city that refuses to hate”? This article about the town states:

“At a bus station in downtown Haifa, handwritten signs in Hebrew, Arabic and Russian have been taped to the glass: “Arabs and Jews refuse to be enemies.””

“Haifa’s reputation as Israel’s premier “mixed” city rests less on its demographics than on the high degree of integration and cooperation among Arabs and Jews, not found elsewhere in the country. In addition to several mixed neighborhoods, Israeli Arabs hold key positions in government, business and major professions such as healthcare to a degree rarely found elsewhere in Israel.”

““Here, we accept each other,” Nwessir said. “Like, okay, you have your opinion and I have my opinion, and we can talk about that, but we don’t have to kill each other.””

Many people are already setting a good example. The Facebook page Jews And Arabs Refuse To Be Enemies has some great lines and photos, such as:

“It’s not about religion or ethnicity, it’s about the person in front of you.”

Unification requires remembering what’s real and what’s important. When a Palestinian mother and a Jewish Israeli mother both lose a son in war, they are bonded by that sad loss and occurrence, and it is far more real and poignant for them than whatever fake allegiance to nation or religion that prompted the division in the first place. The consciousness of humanity is rising, across the world, and the above examples and movements show that we can unite to heal the illusion of separation, even if we’ve been enemies in the past. The more we unite, the less susceptible we are to exploitation and manipulation. Hopefully, we can do this sooner rather than later.