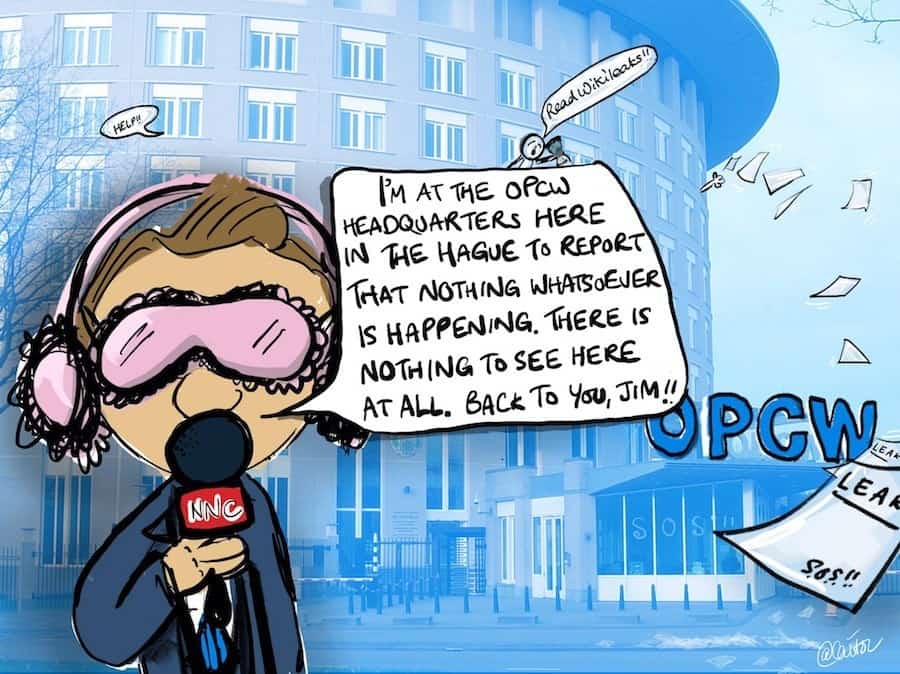 The deafening MSM silence on the latest WikiLeaks drops is its own scandal. The evidence is overwhelming the OPCW helped to coverup the staged Douma ‘attack’.

There is a another MSM blackout on the latest Wikileaks Drop.

This is getting really, really, really weird. WikiLeaks has published yet another set of leaked internal documents from within the Organisation for the Prohibition of Chemical Weapons (OPCW) adding even more material to the mountain of evidence that we’ve been lied to about an alleged chemical weapons attack in Douma, Syria last year which resulted in airstrikes upon that nation from the US, UK and France. This new WikiLeaks drop includes an email from the OPCW Chief of Cabinet Sebastien Braha (who is reportedly so detested by organisation inspectors that they code named him “Voldemort”) throwing a fit over the Ian Henderson Engineering Assessment which found that the Douma incident was likely a staged event. Braha is seen ordering OPCW staff to “remove all traces, if any, of its delivery/storage/whatever” from the organisation’s secure registry.

Minutes from an OPCW meeting with toxicologists specialized in chemical weapons: “the experts were conclusive in their statements that there was no correlation between symptoms and chlorine exposure”.https://t.co/j5Jgjiz8UY pic.twitter.com/vgPaTtsdQN

The drop also includes the minutes from an OPCW toxicology meeting with “three Toxicologists/Clinical pharmacologists, one bioanalytical and toxicological chemist”, all four of whom are specialists in chemical weapons analysis.

“With respect to the consistency of the observed and reported symptoms of the alleged victims with possible exposure to chlorine gas or similar, the experts were conclusive in their statements that there was no correlation between symptoms and chlorine exposure,” the document reads.

According to the leaked minutes from the toxicology meeting, the chief expert offered “the possibility of the event being a propaganda exercise” as one potential explanation for the Douma incident. The other OPCW experts agreed that the key “take-away message” from the meeting was “that the symptoms observed were inconsistent with exposure to chlorine and no other obvious candidate chemical causing the symptoms could be identified”.

Like all the other many, many, many, many different leaks which have been hemorrhaging from the OPCW about the Douma incident, none of the important information contained in these publications was included in any of the OPCW’s public reports on the matter. According to the OPCW’s Final Report published in March 2019, the investigative team found “reasonable grounds that the use of a toxic chemical as a weapon took place. This toxic chemical contained reactive chlorine. The toxic chemical was likely molecular chlorine.”

We now know that these “reasonable grounds” contain more holes than a spaghetti strainer executed by firing squad. This is extremely important information about an unsolved war crime which resulted in dozens of civilian deaths and led to an act of war which cost taxpayers tens of millions of dollars and had many far-reaching geopolitical consequences.

Yet the mass media, freakishly, has had absolutely nothing to say about this extremely newsworthy story.

As of this writing, a Google News search for this story brings up an article by RT, another by Al-Masdar News, and some entries by alternative outlets you’ve almost certainly never heard of like UrduPoint News and People’s Pundit Daily.

Make no mistake about it: this is insane. The fact that an extremely important news story of immense geopolitical consequence is not getting any mainstream news media coverage, at all, is absolutely stark raving insane.

Up until the OPCW leaks, WikiLeaks drops always made mainstream news headlines. Everyone remembers how the 2016 news cycle was largely dominated by leaked Democratic Party emails emerging from the outlet. Even the relatively minor ICE agents publication by WikiLeaks last year, containing information that was already public, garnered headlines from top US outlets like The Washington Post , Newsweek, and USA Today. Now, on this exponentially more important story, zero coverage.

The mass media’s stone-dead silence on the OPCW scandal is becoming its own scandal, of equal or perhaps even greater significance than the OPCW scandal itself. It opens up a whole litany of questions which have tremendous importance for every citizen of the western world; questions like, how are people supposed to participate in democracy if all the outlets they normally turn to to make informed voting decisions adamantly refuse to tell them about the existence of massive news stories like the OPCW scandal? How are people meant to address such conspiracies of silence when there is no mechanism in place to hold the entire mass media to account for its complicity in it? And by what mechanism are all these outlets unifying in that conspiracy of silence?

We can at least gain some insight into that last question with the internal Newsweek emails which were published by journalist Tareq Haddad two weeks ago. The emails feature multiple Newsweek editors telling Haddad that they would not publish a word about the OPCW leaks for two reasons: (1) because no other outlets were reporting on them, and (2) because the US government-funded narrative management firm Bellingcat had published a laughably bogus article explaining why the leaks weren’t newsworthy. Haddad has since resigned from Newsweek.

We may be certain that this story is being killed in news rooms all around the world in similar fashion, and possibly using those very same excuses. As long as no other “respectable” (i.e. establishment) outlets are covering this story, it can be treated as a non-story, using a deceitful US government-funded narrative management operation as justification as needed. If one journalist threw his life into chaos and uncertainty by resigning and blowing the whistle on this conspiracy of silence, we may be certain that the same is happening to countless others who don’t have to courage and/or ability to do the same.

“The US attacked Syria for a chemical attack by Assad last year. But official OPCW scientists who investigated the event didn’t find evidence the Syrian military used chemical weapons. The media has chosen to ignore this story and fire its own journalists who try to report on it,” tweeted author and analyst Max Abrahms.

“This is the FOURTH leak showing how the OPCW fabricated a report on a supposed Syrian ‘chemical’ attack,” tweeted journalist Ben Norton. “And mainstream Western corporate media outlets are still silent, showing how authoritarian these ‘democracies’ are and how tightly they control info.”

“Media silence on this story is its own scandal,” tweeted journalist Aaron Maté.

But this spin machine is twirling off its axis trying to normalize this silence.

Surprise, surprise, Wikileaks didn’t leak the next email in this chain from the OPCW questioning why Ian Henderson was creating rogue reports.

This email also quite clearly contradicts “Alex’s” claim that Henderson was in the FFM. pic.twitter.com/qcJkAyXe9W

Bellingcat narrative jockeys such as “senior investigator” Nick Waters are already scrambling to perception manage everyone into believing their own eyes are lying to them. Waters has a thread on Twitter that’s being shared around by all the usual Syria spinmeisters claiming, based on no evidence whatsoever, that WikiLeaks is selectively publishing the documents it has to create a false impression of events in the OPCW. Waters falsely claims that an email by Sebastien “Voldemort” Braha — the guy at the center of the scandal — proves that Ian Henderson was not a part of the Fact-Finding Mission (FFM) in Douma, in contradiction to the claims made by the anonymous second OPCW whistleblower who goes by the pseudonym of “Alex”.

As Waters is one hundred percent aware, Henderson absolutely was part of the Douma Fact-Finding Mission, and one of the FFM members who actually went to Douma no less. I’ve put together a Twitter thread refuting Waters’ ridiculous claims which you can read by clicking here, but in short an arbitrary distinction seems to have been made between the FFM and the “FFM core team”, or what is labeled the “FFM Alpha team” in a newly leaked email trying to marginalize Henderson’s assessment. Henderson actually went to Douma as part of the FFM, unlike almost all members of the so-called “core team” who except for one paramedic operated solely in another nation (probably Turkey).

Of course, the distinction of whether Henderson was or was not “in the FFM” is also itself irrelevant and arbitrary, since we know for a fact that he is a longtime OPCW inspector who went to Douma and contributed an assessment which was hidden from the public by the OPCW.

So this narrative being spun by the US government-funded propagandists at Bellingcat is bogus from top to bottom, but what’s infuriating is that we already know who editors in news rooms are going to listen to.

“We have this alternative media ecosystem that is driving a lot of disinformation. It is not understood by journalists or anyone really beyond a very small group of people who are really engaged with it,” @EliotHiggins says https://t.co/RWi2Mqy8jV

It’s absolutely amazing how tightly interlaced Bellingcat is with the upper echelons of mainstream news media and the public framing of what’s going on in Syria. Mere hours after the latest WikiLeaks drop, CNN pundit Brian Stelter shared an article about Bellingcat founder and former Atlantic Council Senior Fellow Eliot Higgins, who warns of the dangers posed by alternative media reporters who cover underreported stories like the OPCW scandal.

“We have this alternative media ecosystem that is driving a lot of disinformation. It is not understood by journalists or anyone really beyond a very small group of people who are really engaged with it,” reads the ironic Higgins quote in the excerpt shared by Stelter.

We’ve been seeing a mad rush from mass media pundits to give this US government-funded narrative management operation unearned and undeserved legitimacy, churning out tweets like Stelter’s and fawning puff pieces by The New York Times, The Guardian and The New Yorker. This unearned and undeserved legitimacy is then used by editors to justify looking to Bellingcat for instructions on how to think about important information on Syria rather than doing their own basic investigation and analysis. It’s a self-validating feedback loop which just so happens to work out very conveniently for the government which funds Bellingcat.

It remains unknown exactly what’s transpiring in news rooms around the world to maintain the conspiracy of silence on the OPCW scandal, but what is known is that by itself this scandalous silence is enough to fully discredit the mass media forever. WikiLeaks has exposed these outlets for the monolithic propaganda engine that they really are, and they did it just by publishing extremely newsworthy leak after extremely newsworthy leak.

In order to perception manage us any harder, these freaks are going to have to go around literally confiscating our ears and eyeballs.