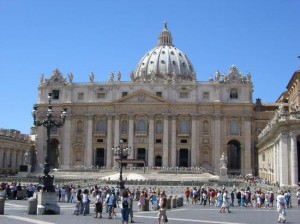 Are you being mass-hypnotised? The typical Christian mass contains lots of hypnotic elements. Ideas can bypass your conscious filter and go deep into your subconscious.

Mass-hypnotised is one way to describe the population

at large, who has bought into the “official” version of history, who we are and who runs the world. However, if you take a closer look at organized religion, in particular Christianity, you will find another kind of “mass-hypnosis.” The Christian liturgical service, commonly referred to as mass, contains several elements which have the effect of changing the participant’s consciousness from an alert, active and critical state (beta brain waves) to a more sleepy, relaxed and receptive state (alpha brain waves) – just like television, the most hideous mind control tool ever. This allows ideas, beliefs and messages (“programming”) to bypass your conscious filter and penetrate more deeply into your subconscious. In other words, when you go to Church, you may be getting mass-hypnotised.

Mass-hypnotised: the 5 stages of hypnosis

According to Michael Sherlock, author of I Am Christ which analyzes hypnosis and NLP (Neuro-Linguistic Programming) as they apply to Christian Church services, a typical hypnotherapy session contains 5 stages:

As the pastor moves from singing to repetitive phraseology to sermon and back to singing to end, the Christian mass can be found to contain all of these elements. This is no coincidence; it shows all the more that religion can be used a tool for mind control. It will depend on the message implanted by the priest. Sometimes, the type of messages may be positive (e.g. love yourself and your neighbor), but often the truth is so interlaced with dogma that it is difficult to separate the two, even for the conscious mind.

However, when such messages go straight into our subconscious, there is no way to critically evaluate them. They then become part of who we are.

What’s going straight into your subconscious to program you?

By attending such a Church service, you open yourself up to be mass-hypnotised. For example, you may hear the priest talking about the value of caring for each other, all the while planting subliminal messages that “God” is “judgmental” and will punish those who do not believe or who hoard too much money. The net result of this is you will walk away feeling guilty and unworthy, a space from which it is hard to truly love others unconditionally. After all, if you feel guilty about yourself and do not fully love yourself, how can you love another?

If religion were really as pure as it claims to be, it would not need to resort to using tools of persuasion and manipulation. However, the fact is that religion, like politics, is not about plain truth, but rather about propaganda and convincing people to buy into a certain limited viewpoint.

Be careful: don’t let yourself get mass-hypnotised. There is a time and place for relaxation and alpha waves, but don’t let your guard down when around those that may be trying to control you. Remember, the Vatican has engaged in child trafficking, killing its own Popes, helping Nazis flee after WWII and more! Do you really want these guys accessing your subconscious or getting mass-hypnotised?

Previous Article
The Top 7 Super Foods & Supplements to Defeat the New World Order
Next Article
The Way to Overcome the Conspiracy Part 3: Govern Yourself