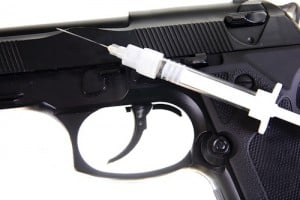 The gun now backs the syringe: California’s 2 bills (SB277 and SB792) require mandatory vaccinations for children and adults, in total opposition to America’s foundation of individual rights and freedom. The Government believes it owns your body. Will you let it?

as California has just achieved the horrific distinction of becoming the first state in the US to introduce compulsory vaccinations for both children and adults (bills SB277 and SB792 respectively). This goes to show that the NWO (New World Order) agenda of collectivism and medical fascism is fast approaching. There is no more time to sit on the fence, debate things intellectually or hide behind the excuse that certain agendas and events are just unprovable conspiracies. Suddenly it’s getting pretty real. By introducing mandatory vaccinations, the Government is essentially claiming it owns your body, it knows best when it comes to medicine and health, that the science behind vaccines is settled, and that it has the right to violate you if it deems in doing do that it’s “protecting the greater good”. How many people out there still consider that the Government forcibly injecting you with at least 10 toxic and carcinogenic vaccine adjuvants (such as mercury, aluminum, formaldehyde, diploid cells from aborted fetal tissue, MSG, etc.) is not a violation?

“Public health officials are joining with lobbyists working for pharmaceutical companies and medical trade associations to pressure state legislators to pass bills that require “vaccine education” and signatures of doctors or other state-designed health workers in order for parents to file non-medical exemptions to vaccination for their children to attend daycare or school. Pregnant women are also a target population. For example, both AL SB 294 (Alabama) and PA HB 1567 (Pennsylvania) require expectant parents to receive information about the pertussis vaccine.”

“Health care workers, teachers, daycare employees and students in NINE states are targets of new legislation that proposes to force children and adults to get federally-recommended vaccines or suffer economic and other sanctions –  from denial of employment and education to denial of parental rights to be informed if a minor child has received one or more vaccines for sexually transmitted diseases!”

Plans are well and truly afoot; check out this scheme to vaccinate all children in the US by 2015.

Australia and Other Nations Also on Road to Mandatory Vaccinations

The Rockefeller Medicine-Big Pharma-NWO push towards mandatory vaccinations is unfortunately not limited to the USA. It’s worldwide. In April I wrote about how Australia, sadly, was following lockstep in the footprints of the US and becoming GMO and Vaccine Australia. In attempting to boost the immunization rate, the Australian Government removed religious exemptions for vaccines, bribed (“incentivized”) doctors to inject more of their patients and financially punished people by tightening up welfare eligibility for parents who fail to vaccinate their children. Other nations that already have mandatory vaccination laws (either at a state or federal level) include Malaysia, Latvia, Slovenia and Croatia.

WHO Can Order Mandatory Vaccinations in All 194 Signatory Nations

To those who have been following the unfolding of the New World Order, it is also unsurprising that the WHO (World Health Organization), another subsidiary of the Rockefeller-created UN (United Nations), has laws on its books to be able to declare mandatory vaccinations in all its 194 signatory states. As Jane Burgermeister reports:

“The International Health Regulations (IHR) pursuant to Article 21 of the Constitution of WHO came into force in June 2007 and allow the General-Director of WHO to declare an international health emergency. In such a case, the Director-General can impose regulations, including “sanitary and quarantine requirements and other procedures designed to prevent the international spread of disease”, also travel restrictions.

In the event of WHO declaring a pandemie, WHO has the authority to order forced vaccinations around the world.

All 194 signatory countries to IHR must comply.”

Funny how all these organizations like the UN, WHO and the US Government have “Generals” like a Director-General, Surgeon-General or a Secretary-General. Maybe it’s because they’re actually corporate and military organizations in disguise – with the intent and possibly the partial ability to force things like mandatory vaccinations on the population.

It seems the medical fascism is not limited to the ground. There were reports in February 2015 of airline companies considering the possibility of introducing mandatory vaccinations also. Thankfully nothing has transpired from this … yet. However the mere fact that airlines were even toying with the idea of forcing people to get vaccinated in order to board a plane is very ominous. We are facing the very real possibility that, if we do not submit and bow down to Big Pharma, with all its bribery, undue political influence, fraudulent marketing, falsification of data and junk science, we will lose our rights and freedoms, or the ability to live a “normal” life in this day and age, which includes things like air travel.

Idea of Mandatory Vaccinations Based on Pseudoscientific Myth of Herd Immunity

The main excuse and justification rolled out by Government, Big Pharma, the Western medical establishment and other pro-vaxxers for a national or global scheme like mandatory vaccinations is herd immunity. Behind that is the idea of collectivism or “for the greater good”. As I discussed in the article “Herd Immunity vs. Viral Shedding: Who’s Infecting Whom?“, herd immunity is a pseudoscientific myth. For starters, vaccine-induced immunity is not equivalent to real naturally-acquired immunity. Logic dictates that if vaccines really worked, the vaccinated would have no need to worry about a disease supposedly being spread by the unvaccinated, because the vaccinated would be protected. The very fact that they are worrying shows that there is serious doubt over the efficacy of vaccines.

Even if vaccines were 100% effective on everyone all of the time – which is very very far from the truth – mandatory vaccinations are still a horribly tyrannical manifestation of collectivism, the notion that all individuals must sacrifice their rights, desires and freedom for the greater good. Of course, the greater good is always defined by the State, or the small group of usually power-hungry individuals who have gained control of the helm of Government. The Government is now trying to claim it has the legal right to do what it wants with your body, including injecting full of poisons disguised as “medicine”, for whatever noble-sounding pretext it comes up with.

We have entered a dangerous chapter in the evolution of our society; we can only hope enough individuals recognize the inherent tyranny of mandatory vaccinations and rise up against them. Even people like Dr. Ron Paul, who as a Western medical doctor is actually in favor of vaccines, spoke out against the idea of compulsory vaccinations on the grounds of libertarianism and individual rights, which just goes to show that you don’t have to be against vaccines to believe in basic liberty.

Of course, whether people will comply with such oppression as mandatory vaccinations remains to be seen …