The Man Who Fights Grey ETs on His Land

The Man Who Fights Grey ETs on His Land 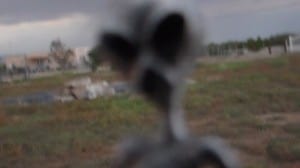 Above: actual undoctored image of a grey alien. John Edmonds was reluctantly drawn into the world of aliens and had to defend himself, his family & his animals against invading and hostile grey ETs. Image credit: JohnEdmonds.info

Grey ETs (Extraterrestrials) are the most

common ET or alien reported in contactee and abductee encounters. So who or what are they? In eyewitness accounts, grey ETs (aka gray ETs, grey, grays) are typically described as around 40 inches (100cm) tall, with almond-shaped heads large relative to the rest of their bodies. Some are described as having large eyes, small noses and small mouths, although as you can see in the picture to the right, some have large mouths too. This is the incredible story of John Edmonds, a man who was reluctantly drawn into the world of aliens when he purchased an Arizona ranch that – unbeknown to him – was already the site of visitations from other-worldly or other-dimensional entities. Although he had appeared on Coast to Coast radio in 2009, John recently came forward to Project Camelot (Kerry Cassidy) in 2 interviews (here and here) to tell the fuller story of how he came to deal with the grey ETs invading his ranch – including fighting them in self defense. 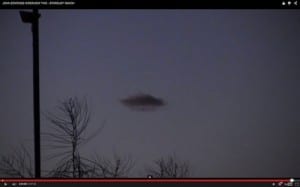 A Social Worker and Rancher Becomes A Contactee

John Edmonds’ story is an astonishing one, even for those already involved in UFO and alien research. John claims that he has been undergoing continuous encounters with grey ETs for around 19 years, ever since he bought his ranch, which he has called Stardust Ranch. He has impressive proof too: a collection of numerous photos, videos and even samples of extraterrestrial body fluid. During the 2nd of the Project Camelot interviews, a UFO appeared in the sky right near his ranch (image above). In this video excerpt (embedded above), you can see the proof yourself; a tiny grey ET pokes its head around the corner at the 1:31 mark.

John has had to deal with these aliens acting in a very hostile manner towards him and his animals, killing 3 of his dogs and mutilating other animals. He’s had to defend himself against these grey ETs who have caused physical harm to him and his wife, often appearing at night while they were sleeping.

Fighting Grey ETs in Self Defense

As I have talked about before, the extraterrestrial issue is a complicated one, and there certainly exist – beyond any doubt – ET races which are “negative” or “service-to-self oriented”, meaning they are hostile to humans and would not hesitate to harm, kill or even eat members of the human race. It’s an ugly truth which is bound to make many feel uncomfortable, but we have to be honest about the situation. A central aspect of this story is the fact that John is very open about how aggressive the greys have been towards him, his wife and his animals – and how he felt compelled to fight back in self defense. You may recall that Phil Schneider made similar claims about the hostile grey ETs he encountered (Phil also ended up killing a grey in self defense, and sustained wounds from them). John writes:

“The assaults by these creatures were responded to in the most violent behavior I could respond with because of weekly and some times daily confrontations during which our home, ranch, horses and dogs were killed. Our bedroom as well as our own bodies were assaulted leaving bleeding holes from syringe like wounds. Large bruises on both myself and my wife in the inner thigh, lower stomach, and upper shoulder areas has occurred on many occasions.”

John stresses that he never wanted to hurt or kill the greys, but the greys kept mutilating and killing his animals, and harassing him and his wife. At a certain point, John decided to take matters into his own hands by acquiring a samurai sword. He has mortally wounded at least a few of these grey ETs, but he states that the greys literally disappear when hurt. In John’s experience, the greys exist in between dimensions, and not completely in this dimension, so they have the ability to pull out of this dimension when they sense danger. In some cases, John has stabbed a grey but it disappeared before it “died”. John theorizes that perhaps the greys cannot be killed unless their head is taken off:

“If they feel safe, then they (the grey ETs) come completely into this dimension and the buzzing stops … I have seen this time and again even after mortally wounding one with a Samurai sword. Pierced by the sword with six inches of cold steel perforating the body cavity and seemingly lifeless, the Gray alien still managed to disappear before I could withdraw the weapon and chop off the head. My intention in removing the head was to see if this would prevent it from disappearing. It is my hypothesis the head controls the ability to control the dimensional transference between one place and another. I had hoped to interrupt the process by diminishing the body integrity.” 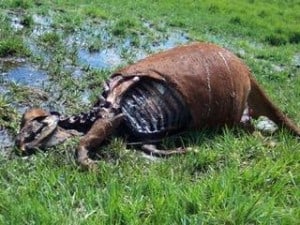 Example of cattle mutilation. Note the clean incisions which are not reminiscent of an animal attack. Image credit: Aliens-everything-you-want-to-know.com

Proof of Involvement of Grey ETs with the Cattle Mutilation Phenomenon

For decades UFO researchers have claimed there was a strong correlation between cattle mutilation and extraterrestrials. There have been stories that the Secret Government cut deals with certain ET groups, which included allowing the ETs to experiment upon cattle.

John’s case appears to be the definitive proof that aliens are the ones responsible. John managed to keep the bodily fluid of a grey ET after an encounter where he wounded it. John states that he sent the fluid off to an independent laboratory for testing in 2009 by an Amanda Nimke and a biophysicist forensic researcher ​W.C. Levengood. They concluded that the sample was extraterrestrial in origin, and did not come from any known terrestrial plant, animal or human:

“Numerous samples have been collected under correct forensic technique by several skilled investigators and were sent to independent labs of high regard. All came back with the same result that the proteins in the samples could not be identified as anything they had seen before either plant or animal or human. One lab did add that the samples sent to them did match the samples they had tested over the last 30 years of fluid specimens they had tested from various cattle mutilations across the South West US. They believed that there was a 100% compatibility that the two were from the same creature(s). Finally a smoking gun that absolutely links cattle mutilations to alien life forms. One scientist was extremely elated by the discovery!”

Levengood was extremely excited about the findings. He told John:  “You have the smoking gun. This is proof of alien life visiting Earth and links the [cattle mutilation] phenomenon together positively!” The conclusion and its implications are far reaching. John has been interviewed, questioned and examined by many, such as “alien hunter” Derrel Sims as well as ex-FBI and ex-CIA agents. The question remains however: will this story get the publicity it deserves? Or will it fall into obscurity, because some simply can’t believe it, and others are warned off from getting to close to the truth? 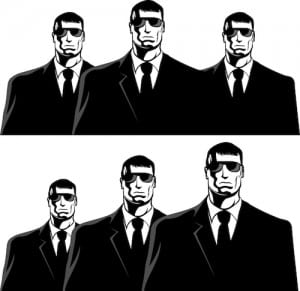 The Men in Black are not just a movie; they are based on countless stories of UFO and alien contactees.

A Visit From the Real MIB (Men In Black)

On that note, John did receive a visit from the Men in Black – not the secret service or mafia, but the semi-mythical figures which have been said to accompany UFO- and alien-related stories. Fortean researcher John Keel was someone who investigated this, and gathered many stories of these figures who were reported to have the ability to appear out of nowhere – to materialize and dematerialize. The MIB have now become part of pop culture due to the movies made after them, however they remain a reported phenomenon in ufology.

John Edmonds recalls how the Men in Black came to his locked gate and literally walked through it. He says they were pasty white, like they had never spent a minute in the sun (in Arizona!), and dressed in the now famous black suit, black sunglasses and black hat. He claims they told him to keep quiet about his story … or else.

Although he has been through harrowing ordeals, John eventually made the decision to go public. He maintains to this day that he never wanted any of this experience, but rather has been reluctantly pulled through it. However, he is doing a real service to humanity by telling the truth so we can all gain a fuller understanding of the big picture.

Thanks to John Edmonds and his wife for having the courage in the face of public ridicule (and governmental threats) to go public with this story. Thanks also to UFO researcher Tommy Hawksblood (who helped John go public with his story) and investigative journalist Kerry Cassidy (Project Camelot).

The New World Order Agenda is the Alien Agenda

Previous Article
Syria War: Geopolitics and Geopipelines
Next Article
This 2016 Presidential Candidate will Blow You Away with His Proposals …